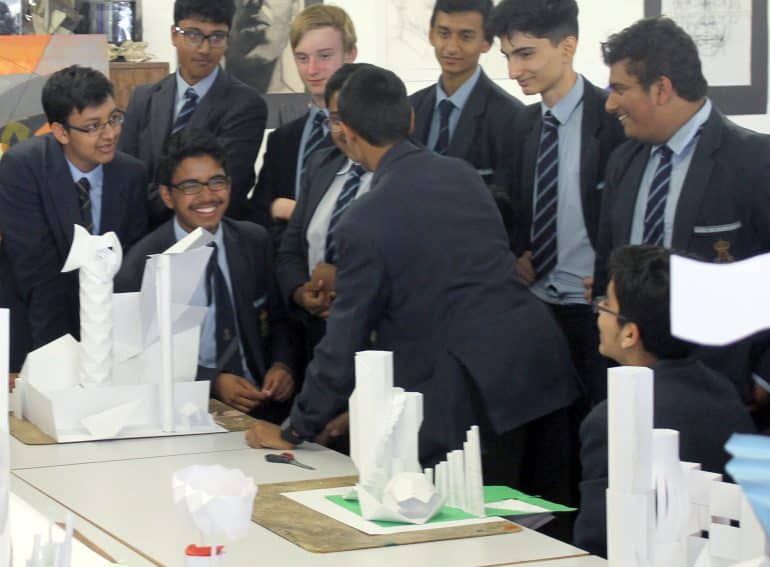 Old Elizabethan Danny, who has completed his second year at King’s College, helped out over the two days of the architectural modelling competition and judged the entries at the end of each day. 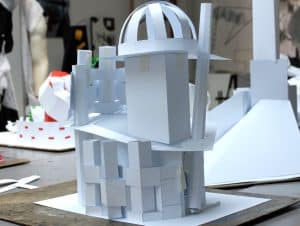 All 180 members of Year 10 were involved in the competition, which was held by the Art department as part of QE’s Enrichment Week.

Afterwards, Danny said: “The ingenuity and creativity from all groups was fantastic. I’m inspired and encouraged by the quality of all the outcomes over the two days.”

The boys were divided into teams of six and given the task of constructing 3D architectural models using only card, paper, tracing paper, pins and paper clips.

The competition rules stipulated that the constructions:

Each group was expected to work as a team and to appoint a designer and project manager, as well as assigning specific tasks, such as origami-making.

Pupils were encouraged to be innovative, creative and visionary, while also setting out the function or purpose of their model and the reason they had for creating it. 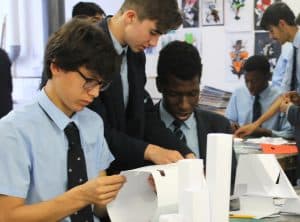 The entries created over the two days included models of museums, airports and mosques.

The overall winners came from Harrisons’ House. The team comprised: Vishruth Dhamodharan; Alan Gatehouse; Raheel Kapasi; Yuvraj Manral; Aiden Smith and Yuto Watanabe. They were commended for the design and construction of their model.

Head of Art Stephen Buckeridge said: “It conveyed the idea of a contemporary beach house and courtyard, utilising light and space in an innovative and creative way. The group worked exceptionally well as a team; they were calm and methodical, and had a clear vision for the outcome. The project management and construction displayed a range of skills, including paper-weaving, origami and nets constructed with mathematical precision.”