From the Headmaster's Study

For well over four hundred years, successive generations of boys have benefited from an education at Queen Elizabeth’s School.

Our rich history is reflected in the School Chronicle, which is read annually on Founder’s Day and which records the Governors’ requirement that the education we provide should be as much in “good manners as in nurture for learning”. Similarly, our formal mission is “to produce young men who are confident, able and responsible”.

To this end, we are committed firstly to the pursuit of academic development at the highest level among our boys. As a meritocracy, we unashamedly celebrate intellectual accomplishment and we seek to nurture clear thinking and scholarly curiosity. The fruit borne by this relentless focus is seen every year in our public examination results: QE is consistently placed at or very near the top of national league tables.

Second, we aim to inculcate in our boys attributes such as confidence, resilience and perseverance – qualities that will equip them to thrive at school, at university and beyond, whatever the storms of life may throw at them. This is achieved partly through our bespoke tutoring system and carefully structured pastoral arrangements, and partly through our expectation that all boys participate fully in the life of the School. We have an exciting, diverse range of extra-curricular activities through which every boy can pursue his interests and stretch himself as he learns new skills and talents.

Finally, through an emphasis on service within the School and through initiatives such as our Sixth Form external volunteering programme, we encourage boys to devote themselves to causes greater than themselves. We thus develop in them an awareness that genuine fulfilment comes through seeking to make a contribution to society rather than in pursuing only personal gain.

Queen Elizabeth’s School, then, offers a meticulous and richly faceted holistic approach to the education of the boys in our charge. It is this approach, combined with our excellent facilities and a proud history dating back to 1573, that make the QE experience truly a state school experience like no other.

"A remarkable school that offers...an exceptional and rounded education that even private schools struggle to compete with."

Having grown up locally, Mr Enright attended The John Lyon School in Harrow, where he was Deputy Head Boy. He went on to St John’s College, Oxford, to read Geography and subsequently took his Post-Graduate Certificate of Education teaching qualification at the University of London’s Institute of Education. His first post, in 2000, was at St Gregory’s RC Science College, Kenton, where he not only taught Geography but was also Gifted & Talented Co-ordinator and the college’s Co-ordinator for the Government’s Excellence in Cities programme.

In September 2002, he came to Queen Elizabeth’s School, where he has since remained. Before his appointment as Headmaster, he held positions as Deputy Headmaster, Assistant Headmaster, Head of Year and Head of Geography. Mr Enright was awarded his National Professional Qualification for Headship in 2007 and an MBA, from the Institute of Education, in 2010, with a dissertation on 'Growing your own leadership in a context of change'.

He fulfils a number of roles on a voluntary basis:

Mr Enright’s previous voluntary positions have included serving as an interview panel member for undergraduate geography applicants to St Hilda’s College and St Edmund Hall, Oxford, and undertaking various roles for the University of Hertfordshire’s Faculty of Education. He was also involved in development of the Post-Graduate Certificate of Education course in secondary-school geography at the Institute of Education and for several years delivered training for this course to trainees and subject mentors. 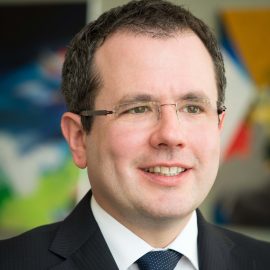