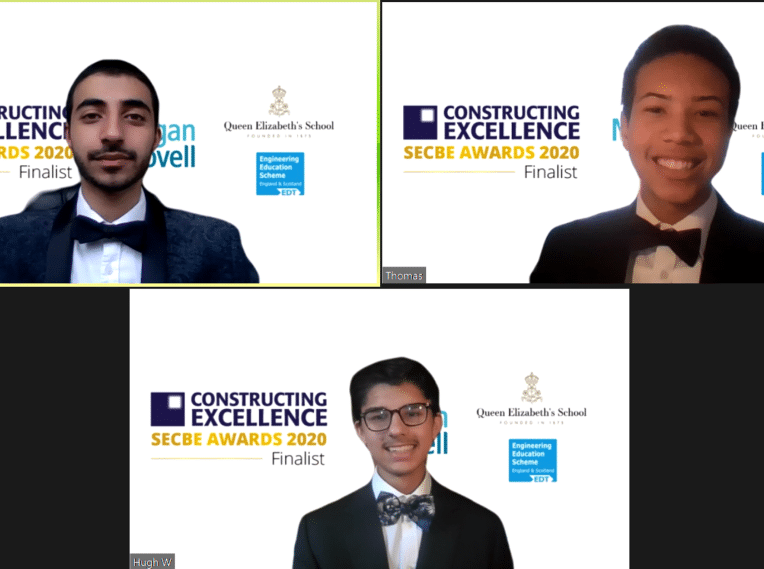 A Year 12 team won both the prestigious Innovation Award and the new People’s Choice Award at the SECBE Constructing Excellence Awards. 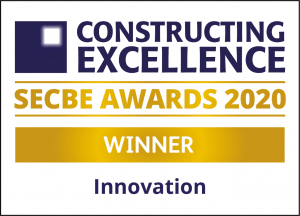 Competing against entries from leading professional construction firms, QE’s four-strong Engineering Education Scheme team were rewarded by the judges for the strength of their design project aimed at reducing the risk of injury from band saws.

Headmaster Neil Enright said: “My congratulations go to the team on what is a great success both for them and for the School. Their very impressive submission evinced not only innovative thinking and a sound understanding of engineering principles, but also meticulous implementation and very effective communication of their ideas.”

Thomas Mgbor, Hugh Westcott and Kai Sethna donned black tie to take part in the awards ceremony, together with Technology teacher Tony Green. (The fourth team member, Brandon Ionev, was unable to take part because of an examination.)

Mr Green said: ‘The boys deserve all of the plaudits that will come their way for an outstanding performance.” He thanked all in the Elizabethan community who supported the team in their bid to win the People’s Choice Award, which was decided by popular vote. 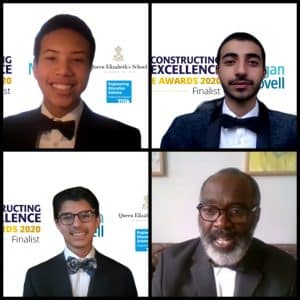 The team worked with office design specialists Morgan Lovell on the project, which involved a number of suggested improvements to band saw guards and dust extraction systems. Tweeting their “huge congratulations” to the QE four, Morgan Lovell said: “We’re really proud to be alongside the engineering minds of the future”.

During visits to construction sites, boys saw that workers would often not use the blade guard fitted to existing band saws, because it was time-consuming to reset the guard manually each time to adjust it for different thicknesses of material.

To address the issue, the boys conducted extensive research over six months. They came up with three designs, all based on the same concept. The material pushes against the bottom of the blade guard, causing a force that pushes upwards and adjusts the blade guard automatically to the correct and ideal height for cutting. With no user input needed, saw operators could then work in the same way as before, but much more safely. 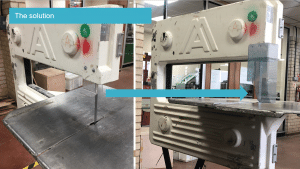 An additional benefit of the designs was that they incorporated significant improvements to the existing dust extraction systems of saws, thus reducing dust exposure – another health & safety concern – and allowing a more precise cut to be made because of the enhanced visibility of the cutting service.

The designs would work with different types of saw and, unlike existing guards, they covered the blade from multiple angles, which is another safety improvement. Because they could be retrofitted to existing machines, the guards hold out the promise of improving safety without huge expenditure. The boys were assisted by their industry mentor, representing Morgan Lovell, Health, Safety & Wellbeing Manager Alex Wood. 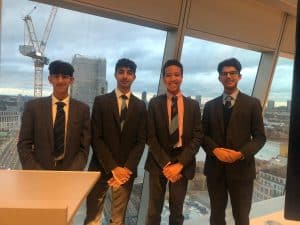 Team leader Thomas opened the team’s presentation to the judges at the virtual awards ceremony, before Hugh and Kai went through it in more detail. They faced some tough questioning from the judging panel, which comprised Chris Blythe (Chairman of SECBE, a construction industry not-for-profit company working towards positive change in the sector), Bill Ferris OBE (Chief Executive of Chatham Historic Dockyard Trust), James Wright (Framework Manager for Southern Construction Framework) and Julie Barry (Head of Business Development for RIFT R&D).

“Later in the day, we pushed for the People’s Choice Award on social media and won that award, too!” said Thomas. “It was a really enjoyable day to showcase our young talent and ‘show up’ some of the professional construction firms. In the words of SECBE, we were ‘recognised as the best’, and hope to inspire the rest.”