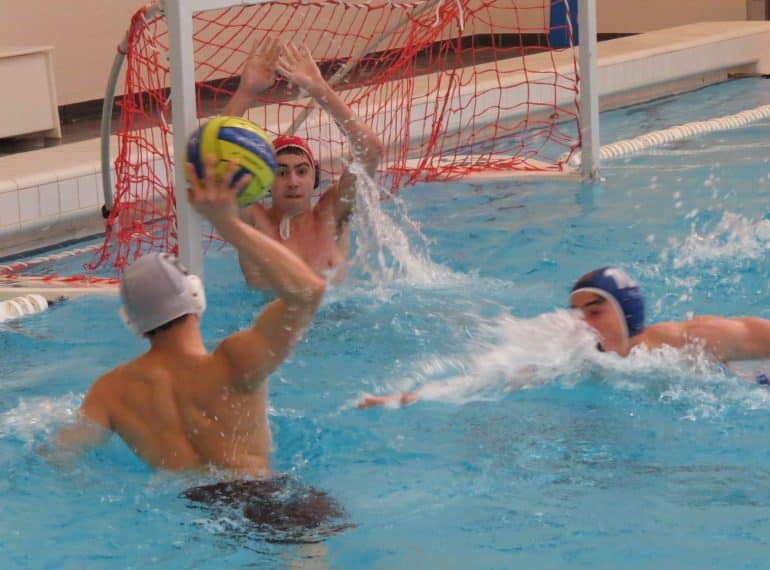 QE’s water polo players are celebrating a successful end to a season which saw both the senior team and U15s storm through to their national finals.

The U18s enjoyed convincing wins over Bedford School, Marlborough College and Harrow on their way to the English Schools Swimming Association (ESSA) National Plate Final, with their U15 counterparts following a similar path. Both finals were held at Northampton School for Boys.

Head of Aquatics Richard Scally said: “All the players in these teams should be congratulated on their outstanding performance this season, as should our talented U13s, who show great potential and enjoyed a long unbeaten run.”

ESSA’s schools’ water polo competitions are run for U18, U15 and U13 age groups. After the first phase of mainly regional competitions, the teams are split into three levels, with QE competing in the Plate competition for intermediate schools.

The School’s U18 team qualified for the National Plate Final by recording semi-final victories of 7-4 against Bedford, 7-1 against Marlborough and a 7-0 whitewash against Harrow.

“Unfortunately, therefore, the senior side lost a couple of games by a single goal. Although it is a sign of just how close they were to victory, it only added to the disappointment. Nevertheless, the effort shown was very commendable, and, with many of the senior players still around next year, it augurs well for next season.”

“The competition in all these games was evenly matched and both our sides performed very well.”