“I may not be black, but I can still see the injustice”: poetry competition responding to BLM

Academic enrichment > News & Events > News > “I may not be black, but I can still see the injustice”: poetry competition responding to BLM 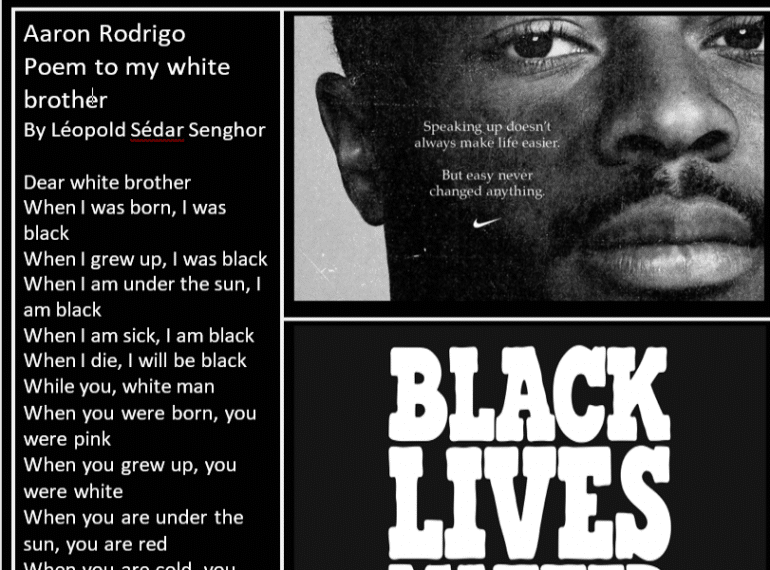 Pupils in Year 8 and 9 French classes drew inspiration from a poem about racism in a lockdown poetry competition.

The starting point for the contest was a poem attributed to the 20th-century Senegalese poet and statesman, Léopold Sédar Senghor, entitled Poème à mon frère blanc (Poem to my white brother).

The boys could either produce an English translation of the poem, their own poem inspired by the message of the original, or a commentary on the poem, with an analysis of the meaning and style.

French teacher Rebecca Grundy said: “We encouraged the boys to research the recent headlines about the Black Lives Matter movement in order to give their work a modern, updated twist. We were delighted with the way that they managed to take Senghor’s poem as inspiration while also reflecting on recent events: they produced some really beautiful, creative writing and translation work.”

Aaron gave his entry the title Black Lives Matter – we can make a change! and illustrated it with the 2018 Nike advertisement featuring the face of the Manchester City forward Raheem Sterling and bearing the legend ‘Speaking up doesn’t always make life easier. But easy never changed anything’.

Darren’s 17-line homage to the original is entitled Poème à mon Frère Blanc – Revisit and Reflection. Starting with a very personal perspective (‘I may not be black, but I can still see the injustice’), it ends with the thought that recent events have affected the whole world: ‘…the infamous line that shook the globe, “I can’t breathe”’.

Darren and Rodrigo’s entries have been selected for inclusion in the next edition of The Arabella, QE’s pupil-produced arts magazine. Scroll below to read them.