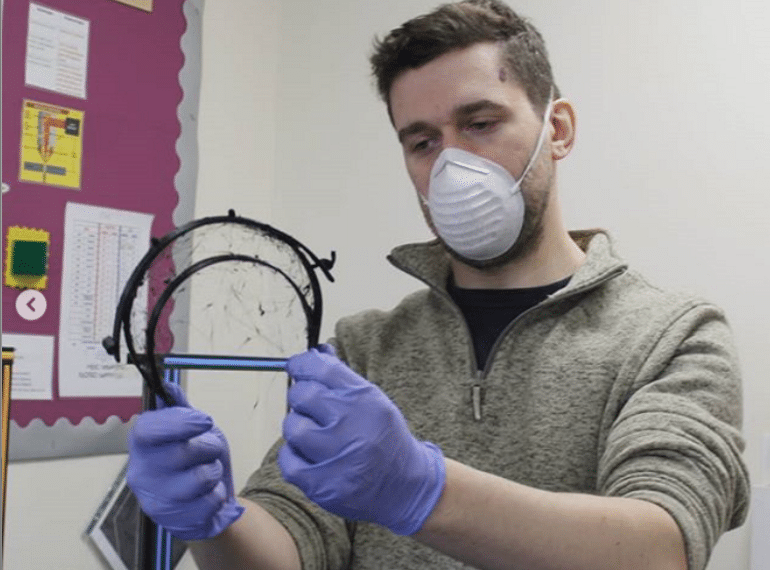 Head of Technology Michael Noonan is putting the School’s 3D printers and laser-cutters to good use by manufacturing protective visors for the NHS – part of a co-ordinated effort to support the national fight against the Covid-19 virus. 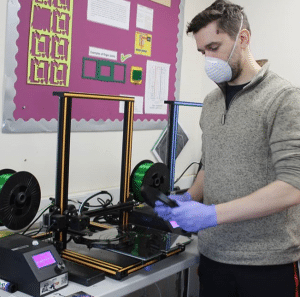 In addition to coming into School twice a day to set up and run the machines, which would otherwise be idle, Mr Noonan is also co-ordinating 3D-printing efforts among volunteers from schools and individuals. The face shields and ventilator components are being produced for hospitals, GP surgeries and social care organisations.

He is being supported remotely by boys (many from the School’s robotics teams), who are working from home using their own 3D printers to boost production still further.

Mr Noonan says: “It’s a wonderful example of how design and innovation can help solve some of the big problems we face in the world.”

Headmaster Neil Enright added: “We are very proud to be able to play our part in supporting doctors and other medical staff – who include many of our old boys – working on the frontline to combat the virus and save lives. At a time of great national uncertainty, it is good to be able to report on something positive.”

QE staff are currently working from home because of the crisis, but Mr Enright was happy to grant Mr Noonan’s request to make short, twice-daily visits to use the machines in the School’s Fern Building.

The face shields are part of the Personal Protective Equipment (or PPE, in medical jargon) which are currently in short supply because of the heavy demand as the number of people confirmed as having the virus continues to grow rapidly. 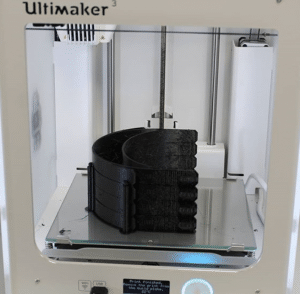 Welsh engineer David Sims initially came up with the idea of using his home 3D printer to make the shields after a discussion on Facebook with others around the world working on designs to help health workers. He was quickly contacted by NHS doctors from around the country who placed orders with him.

Mr Noonan, who is a specialist in Computer-aided Manufacture and Rapid Prototyping using 3D printers, 3D routers and laser-cutters, immediately stepped in, not only producing the specialist masks and ventilator components, but also setting up dedicated a Facebook page and Twitter feed  (‘Design and Technology Education – Helping to fight the spread of coronavirus’) to guide other teachers.

“The idea is simple”, says Mr Noonan. “Individuals or schools use their 3D printers to print the visors using one of the many files that have been developed by teachers and designers around the country.”

After filling in their details on an online spreadsheet, they are then paired with a hospital close to them through the 3dcrowd, a volunteer group who are leading the national effort. 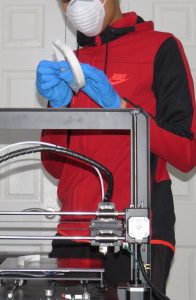 “I was one of the first London people involved, so I just kind of fell into coordinating,” Mr Noonan added.

“So far we here at QE have printed 20 visors, but now that we have the design finalised we are hoping to ramp up production to about 50 per day.

“We even have some of our wonderful QE students who have 3D printers at home helping us out.”

Several of these boys were recipients of this year’s Arkwright Engineering Scholarships and used their award money to fund the purchase of their 3D printers. Thomas is pictured, above, at work. 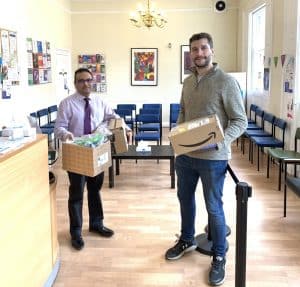 UPDATE: 3rd April 2020. Mr Noonan has now donated the first consignment of face shields to the NHS locally, handing over the supplies to Dr Ahmer Farooqi, Director, Barnet Federated GPs (and a QE dad), who have posted a thank you message on their website.

In recent days, the School has also donated its supply of 228 pairs of eye protection glasses to Dr Farooqi for use by GPs in Barnet.

To read more about the story of how and why Mr Noonan got involved, read Technology teacher Sean Kelly’s account, Designing a better tomorrow.

For more information on the national scheme, visit http://3dcrowd.uk