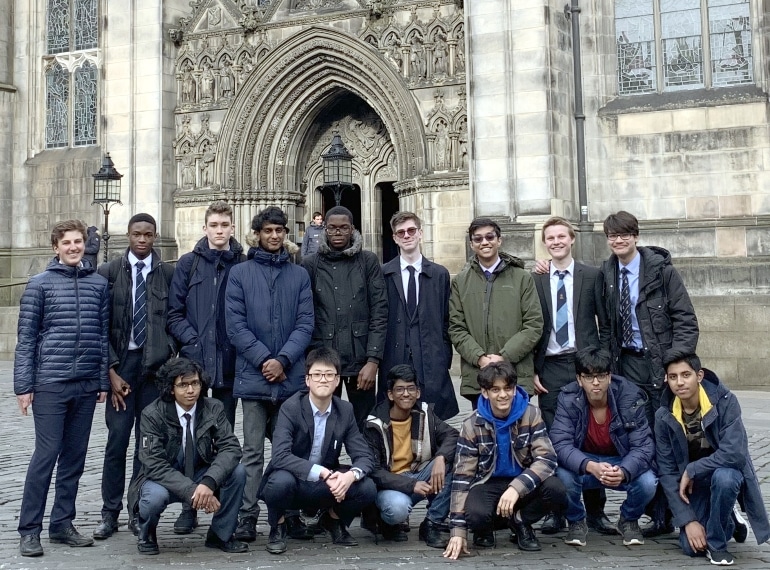 QE pupils stormed through the early stages of the Bar Mock Trial National Final and drew praise from real-life judges and barristers for their performances. 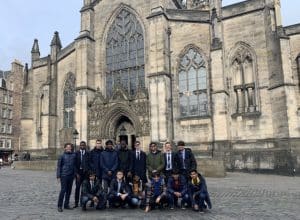 The team reached the competition’s national final after winning their regional round. The event was held this year in the Court of Session – Scotland’s supreme civil court – in Edinburgh’s historic Old Town.

Jack Robertson, QE’s Head of Philosophy, Religion and Society, said: “The students were outstanding on the day and can be very proud of their efforts across the year. A number of judges and observing legal professionals commented on how the group’s conduct was exemplary, and that our barristers’ advocacy skills were on a par with qualified members of the bar.” Mr Robertson accompanied the team, together with Chemistry teacher Charani Dharmawardhane.

The competition, which is for 15-18 year-olds, involves competitors taking on a number of roles to simulate a real court case, including not only those of barristers, but also of witnesses, clerks, ushers and jury members. Twenty-four schools from across the UK took part in the national final.

In the first of their three rounds, the QE defence team delivered an “outstanding performance”, Mr Robertson said, winning the heat by several points. Year 12 pupil Oscar Smith’s highly rated closing speech gave him the top score of any participant in that particular trial.

QE also won their second heat, with Rivu Chowdhury, of Year 12, conducting an “incisive cross examination” of the prosecution witnesses.

In their third round, QE lost by a single point. Nevertheless, one observing legal expert applauded the skill which QE barristers Hector Cooper (Year 12) and Yuvan Vasanthakumaran (Year 11) demonstrated in their advocacy.

The QE witnesses on the day were:

“There were also highly professional performances from Rukshaan Selvendira, of Year 11, as the macer [an official who keeps order in a Scottish court] and Karan Patel as court clerk. Jurors Denis O’Sullivan (Year 12), Euijin Lee (Year 11), Amaan Khan (Year 11), Saifullah Shah (Year 12) and Shakshum Bhagat (Year 12) performed their duties well and were a credit to the team,” Mr Robertson added.

The trials were judged by well-known real-life judges, including Lord Leveson, currently the President of the Queen’s Bench Division and Head of Criminal Justice, who is best known for chairing a public inquiry into the culture and practices of the British press.

“Many of the barristers and judges present mentioned to Miss Dharmawardhane and me that they fully expect to see some of the boys being called to the bar one day in the future,” Mr Robertson said.

The boys took advantage of an opportunity to visit Edinburgh Castle and to walk along the Royal Mile to see statues of the philosopher David Hume and political economist Adam Smith, and buildings such as St Giles’ Cathedral, where they are pictured above.

Juror Saifullah said: “Edinburgh was a lovely city, the courthouse a stunning example of architecture, and the chance to interact and converse with students from as far afield as Glasgow and Belfast was a genuine pleasure. A remarkable experience overall.”