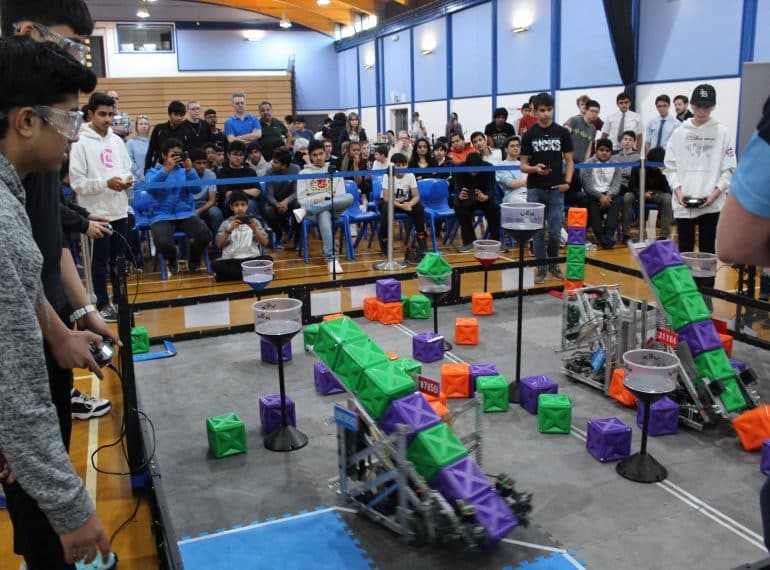 QE attracted a high-class field of some of the best and brightest robotics enthusiasts from London schools when it hosted its VEX EDR senior tournament.

Eight awards were on offer – the highest at any school-based regional competition this year – and all 20 teams were keen to pick up some silverware.

Headmaster Neil Enright said: “Robotics is a hugely popular extra-curricular activity at QE, with our boys enjoying national and international competition successes. We are therefore pleased to be able to give something back to school robotics by hosting tournaments here.”

Participants in the QE North Regional competition included the reigning national champions, St Olave’s Grammar School from Orpington, as well as Greig City Academy in Hornsey and The John Warner School in Hoddesdon. 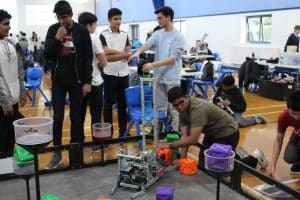 QE entered four teams: HYBRID, comprising Year 12 pupils, and SYNAPSE, ECLIPSE and Technogear, whose team members are all in Year 10 and were thus the youngest competitors in this age group.

Head of Technology Michael Noonan said “Following on from the tremendous success of the IQ Regional event for junior teams which we hosted at the end of last term, there was excitement and anticipation aplenty in the Shearly Hall as the senior event got underway. Our teams were in confident mood and eager to prove their mettle on home ground.

“There was high drama from the very beginning when QE’s SYNAPSE team, which had been confident of putting in a strong performance, faced a setback when their robot failed the routine inspection by the very narrowest of margins. The team suddenly faced a major undertaking – rebuild the ‘bot’ whilst also trying to practise and prepare for the competition. Their gallant efforts meant that a newly constructed, but, as yet, untested, robot was ready in time for qualification, but it put them under a great deal of pressure,” said Mr Noonan.

It was an intensive day of preparation and competition. All the teams were extremely busy both with practising and with forging relationships with teams from other schools with a view to forming alliances at a later stage in the event. They also had to contend with the four circulating judges, who interviewed the participants for the Design, Excellence, Think, Judges’ and Build awards.

Toby Reisch, Systems Engineering Manager at Cummins Inc and the Design/Excellence Judge said: ““I was enormously impressed with the quality of the work from all of the teams as well as the clear dedication to the task. The use and understanding of many industry-standard processes was great to see coupled with extensive innovation and lateral thinking.” 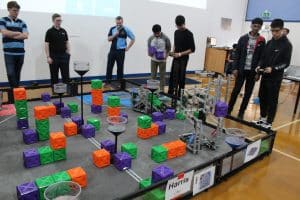 And Mark Jones, also a Design/Excellence judge said “The standard of the design and build was very good, especially with those teams that are new to the VEX and VRC competitions. The teams were knowledgeable about their robots and the processes that they had been through.”

When the competition began in earnest, QE’s team HYBRID had some challenging initial games, achieving some tight wins. In their second qualification, match they signalled their intent, as well as their capabilities as an “offensive juggernaut”, in the Tower Takeover game, scoring an impressive 76 points, Mr Noonan reported. This put them on the radar of other strong teams, and despite narrow losses in two of their eight games, they remained a favourite to take a high-ranking position in their alliance selection later in the day.

For team SYNAPSE, the scale of the challenge of rebuilding and practising simultaneously proved too much, as they succumbed to more losses than wins. The School’s other two Year 10 teams performed valiantly; Technogear finished in eigth position in a highly competitive field, and ECLIPSE finished 13th.

The alliance selection was hotly anticipated, with all 20 teams having the opportunity to compete. Team Technogear profited from their eighth-ranked position to select their QE classmates, ECLIPSE, while Team SYNAPSE paired up with a team from Westminster, aiming to upset the odds in a preliminary quarter-final. As expected, team HYBRID was selected by the number one-ranked team, Control Freaks from The John Warner School (JWS). They went on to form what would prove to be an unbeatable alliance.

Drama unfolded throughout the elimination rounds, as lower ranked teams, ties and close calls for referees added great atmosphere and excitement to the occasion. As the semi-finals drew to a close, the formidable QE/JWS alliance had overcome all of their opponents with ease, winning all their eliminators by an average score of 44 points.

Team SYNAPSE’s alliance unfortunately could not overcome their first obstacle, losing out in a closely fought tie. However, it was the surprise package of the day – the all-QE alliance of the Year 10 teams, who reached the decider – narrowly beating an all-JWS alliance in the quarters, and a JWS/Olave’s alliance in the semis. 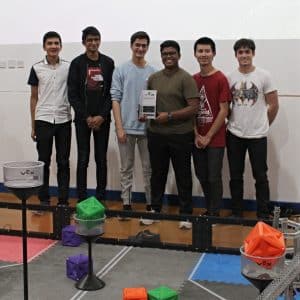 In the final round, the action started in an unexpected way, when the number one-ranked team changed their autonomous routine. This tactic proved crucial, as the scramble for cubes ended in a flurry of scoring, de-scoring and stacking of cubes in protected zones. Ultimately, the highly offensive tactics of the higher ranked alliance prevailed, with QE-JWS winning out with a score line of 65-20. The audience recognised the efforts of the teams in reaching the pinnacle of the competition, as did the judging panels.

Not for the first time this year, QE had both reigned victorious and lost the final in the same action! However, the audience recognised the efforts of the teams in reaching the pinnacle of the competition, as did the judging panels. Team Technogear were awarded the Design Award for the second time in four days, but the majority of the spoils went to Hybrid – winning the Teamwork, Skills and Excellence Awards. With only one competition left before the signature and National Championships, this event proved to be an invaluable exercise in building skills and experience for these teams at the highest stage.

“I have to thank my colleagues Sean Kelly, Shane Maheady, Gillian Deakin, Jonathan Leigh, Lydia Jowsey-Alexander and Liberty Kimber for their contribution in setting up and helping to run the event,” concluded Mr Noonan.

The competition came just days after QE’s teams had pitted their wits against some of the finest VEX EDR Teams in the country at the GCA Regional event. “The same teams took part against high-quality opposition from the powerhouses of south east schools robotics,” said Mr Noonan. After the early bouts, Queen Elizabeth’s teams were placed highest, with SYNAPSE ranked first and ECLIPSE ranked second. Team Technogear ranked right at the bottom at 15th. Year 10’s Heemy Kalam from team SYNAPSE selected the experienced St Olave’s School’s Download Complete Team – reigning national champions – to be their partners in the elimination matches.

“Team ECLIPSE were then faced with a conundrum: did they pair up with their next highest ranked team, or did they choose familiarity in team Technogear, and hoist them up from lowly 15th Position to be part of the second overall-ranked alliance?” said Mr Noonan. They chose their classmates.

“The QE/St Olave’s pairing quickly made light work of their competitors, whilst the all-QE alliance were desperately unlucky to be denied by a falling robot and then to miss out by a single point. SYNAPSE-Download Complete went on to win their semi-final by 12 points, with their final match proving to be their tightest in elimination; they won by 12 points. 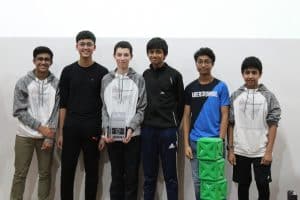 “Great credit is due to their drivers and designers, as well as their programmers for an autonomous routine which proved effective throughout,” said Mr Noonan.

Technogear were crowned Design Award winners and Robot Skills Award winner, making QE robotics the winners of three out of four awards on offer on the day.

The teams were made up as follows: