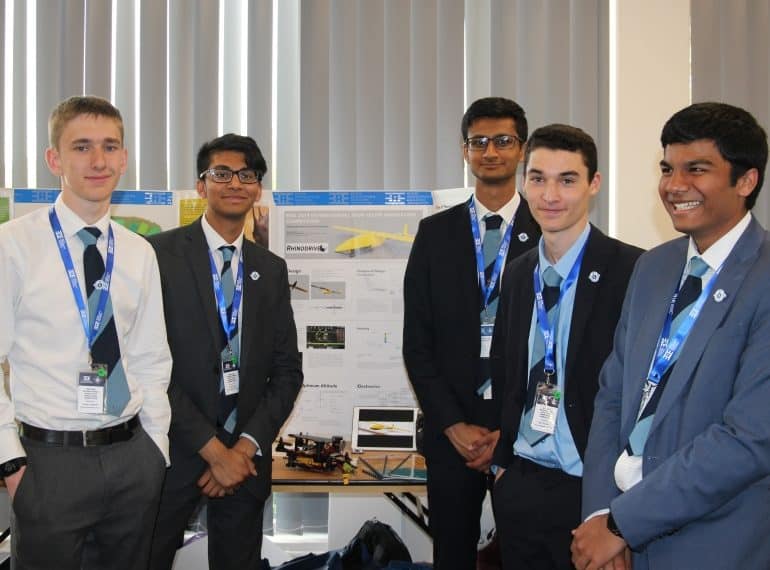 A QE team impressed the judges with their presentation skills as they explained how their glider drone design could help save black rhinoceroses from extinction. 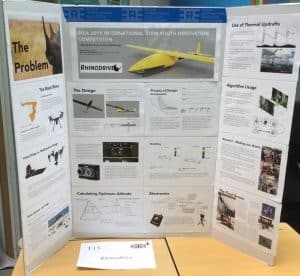 The competition involved several elements, from the judging of presentations conducted by industry and conservation experts, to the actual flying of a drone, where the challenge facing the teams was to survey 15 species in their simulated natural habitat.

Head of Technology Michael Noonan said: “It had been a long journey requiring great dedication for our boys to even reach the international finals, so they were exhilarated to be there, even though the standard of competition was very tough indeed.”

“The boys performed admirably, using the drone technology to spot all but one animal on their survey – a pesky snake camouflaged into a tree branch!”

The team comprised Deeps Gandhi, Aryan Jain, Simon Sherriff, Ben Domb and Tarun Bhaskaran. They secured their place in the international finals partly because they opted to design and build their own drone using parts which they 3D-printed themselves, rather than buying an off-the-shelf, proprietary machine, as many other teams did. “This set them in an élite group, along with a gifted and talented academy team from Palo Alto, California,” said Mr Noonan.

Even more impressively, they designed and built the drone while adhering very strictly to their £100 allocated budget, again, unlike many of the other teams.

However, what had been an advantage earlier in the competition would prove to be a challenge in the finals, as the demonstration flight at the start of the day’s competition used the very same drone that many of the teams were using, thus giving QE’s competitors the opportunity to pick up tips by observing the trial flight. The QE team nevertheless performed well, Mr Noonan stated.

“After the judges visited, the boys were in a confident mood that the presentation of their ideas and professional layout of their resources had set them in good stead.” That confidence proved justified when the team’s name was one of the first to be read out as the presentations began.

And although naturally disappointed to miss out on the top prize of £5,000, there were no real hard feelings, as Mr Noonan explained: “A Bosnian team won this accolade for an incredible performance, despite challenges of funding and lack of facilities. The boys felt this was well deserved, and simply revelled in what had been a great experience.” 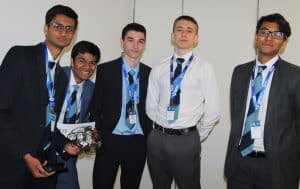 Team member Deeps said: “Participating in this competition has not only allowed us to think about our ability to impact global issues such as conservation through STEM, but has also taught us key skills such as time management, teamwork and communication.”

After the awards ceremony, the boys headed to Waterloo Pier to board the London Belle barge and then spent an enjoyable evening on the Thames in the company of the judges and other participants.