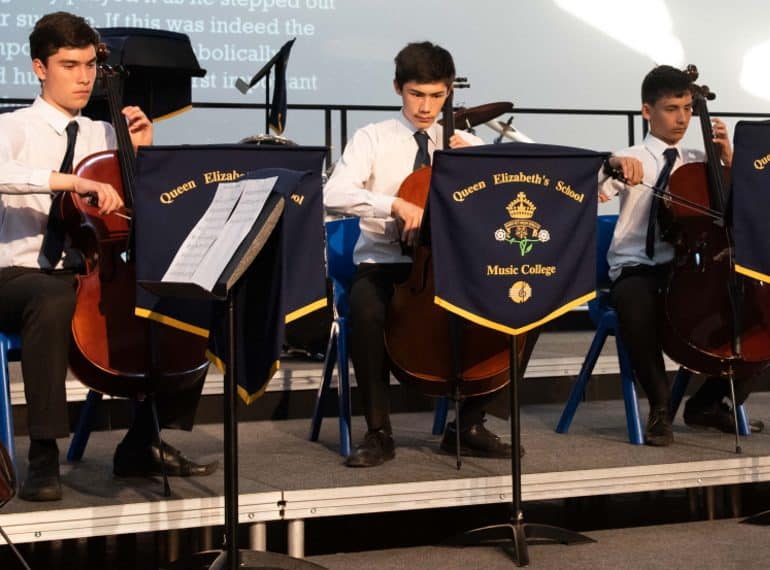 QE’s first concert of the year delivered a “very high standard” of performance from both pupils and staff, including the School’s new Director of Music, Ruth Partington.

The programme featured well-known items from the classical repertoire – a Chopin Nocturne and an excerpt from Mendelssohn’s Songs without Words, for example – as well as several lesser-known pieces. 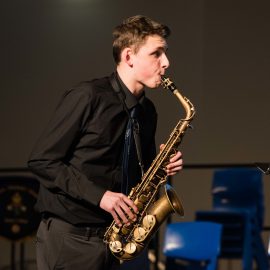 hat he had won an Organ Scholarship at Jesus College, Cambridge, for next year. Drew, one of the School’s leading musicians pictured here with his saxophone, played the piano at the concert, performing Dussek’s Sonata in Bb Movement I.

Headmaster Neil Enright said: “This was a splendid evening, with a great deal of talent in evidence from boys who played to a very high standard. My congratulations go to all involved, and especially to Drew upon his very special achievement.”

Drew is to be the first Oxbridge organ scholar from the School since Peter Yarde Martin (OE 2002-2007), who attended Pembroke College, Cambridge, and provided advice to Drew as he prepared his application.

With nine pieces played in each half of the concert held in the Main School Hall, there was variety a-plenty, from Year 13’s Mubin Kazmi’s rendition of Grammy Award-winner Steve Vai’s Die to Live on the electric guitar to Year 12 cellist Karan Zakharia’s performance of Bach’s Cello Suite No. 1 Prelude and Sarabande.

Entitled Senior Concert, the event in fact featured not only older boys but pupils from throughout the School; they were selected according to their seniority in terms of talent and proficiency.

Alongside the boys’ performances, there were also pieces from several members of staff. Miss Partington and another newcomer, Caroline Grint, QE’s new Music Graduate Assistant, brought out their clarinets in their first QE concert, playing Mendelssohn’s Concertpiece No. 2 Movements II and III. Peripatetic teacher Tadashi Imai accompanied them and other musicians during the evening, but also played two piano solo pieces, Debussy’s Feux d’artifice (Fireworks) from Preludes Book II and Chopin’s Heroic Polonaise.

Ensembles taking part included the Celli, playing Fauré’s Fugue in A minor Op.84, and the Brass Ensemble (Zingarelli’s Adagio and Presto), while the Chamber Choir opened the evening with John Ireland’s The Hills.