Starring roles: alumni aim to inspire current pupils with a love for space 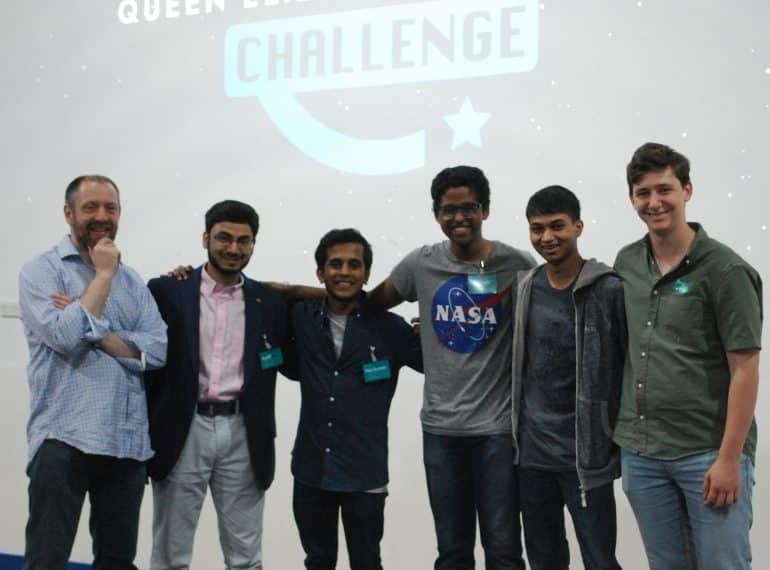 Five veterans of QE’s past national and international successes in space design competitions returned to Barnet to help stage an inter-school Galactic Challenge. 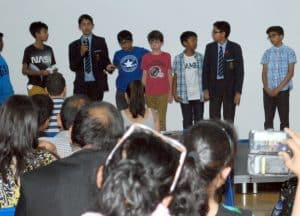 Aadil Kara (OE 2010–2017), who has just completed the second year of a Physics degree at Imperial College, is currently Chair of the Galactic Challenge (GC) – a regional competition for younger pupils and a sister competition to the UK Space Design Competition (UKSDC). In his final year at QE, Aadil progressed from the UKSDC to the International Space Settlement Design Competition, hosted by NASA’s Kennedy Space Center.

Aadil, worked with QE’s Head of Physics, Jonathan Brooke, to help the School host a Galactic Challenge for secondary schools in London.

“Old Elizabethans are currently playing a key role in the organisation of both the UKSDC and the GC,” said Mr Brooke. “I’m hugely impressed by their willingness to give up their time to support these competitions which give children from schools across the country experience of working in large teams under a tight deadline – a taste of the challenges associated with professional life that are difficult to replicate in the classroom.” 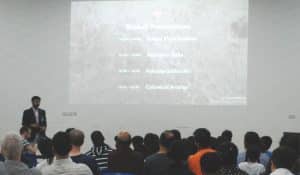 Helping Aadil and Mr Brooke were Aadil’s QE contemporaries and former UKSDC co-competitors, Neelesh Ravichandran, Harikesan Baskaran and Sam Bayney, as well as David Dubinksy, who attended QE from 2012–2016. Neelesh, Harikesan and Sam all served as Coordinators on the day, while David, who, like Aadil, reached the international stages of UKSDC in his year, was the volunteer CEO for one of the competing teams, or ‘companies’.

The Galactic Challenge is a space industry simulation challenge for students aged 10-14. Children design a settlement in space within just a few hours, competing against other teams, as well as the clock.

At QE, in addition to the School’s own Year 7 company, named Columbus Aviation, there were entries from: Dame Alice Owen’s School; The Charter School, North Dulwich; The Henrietta Barnett School and The Latymer School. 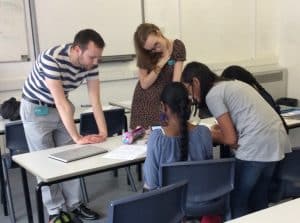 Aadil said: “We run GC competitions throughout the country firstly to stimulate students’ interests in STEM from the early ages of secondary education, and secondly to help them develop ‘soft skills’, including team-working and interpersonal skills. Having first participated in the process in the Sixth Form, it was a pleasure to be able to bring the competition back to the School.”

The ‘companies’ worked to complete a task set by the fictional Foundation Society. In the morning, they were given a Request for Proposal (RFP) co-written by Aadil that reflects a typical design brief in the space engineering industry; they then spent the day producing designs in response, assisted by a volunteer ‘CEO’ for each company.

The scenario involved them jumping forward to 2069, coinciding with the celebration of the centenary of the Apollo 11 moon landing. Students produced designs for Armstrong, the first holiday resort on the moon, named in honour of Neil Armstrong, famously the first person to step on to its surface in 1969.

The Armstrong resort had to include a commemorative area around the Apollo 11 landing site and to host trips from tourists visiting from other settlements around Earth’s orbit. Competitors also had to find a way to make the lower half of the Apollo 11 Lunar Model (which remains on the moon’s surface) the centrepiece of a tourist attraction, whilst considering how to conserve the site.

The companies’ design proposals considered almost all aspects of the design of a futuristic space settlement, from the activities offered to tourists to the methods of power generation.

At the end of the day, the companies presented their work in ten minutes to an audience of parents, their peers, and a judging panel. In the presentations, students suggested ideas including: settlements made out of recycled materials; rearing rabbits on the moon, and Earthrise viewing platforms, with the home QE team suggesting lunar bungee-jumping. The winning team was a combined company – Astrodyne Delta – drawn from Dame Alice Owen’s School and The Charter School, North Dulwich.

Afterwards, Neelesh, who has come to the end of his second year at Imperial, where he is reading Electrical and Electronic Engineering, said: “Volunteering at UKSDC is a truly rewarding experience. The enthusiasm, curiosity and ingenuity of the participants is awe-inspiring and has served to remind me of why I study engineering. Both these competitions are a test of character and imagination, for volunteers and participants alike.”

Harikesan has finished the second year of a Mechanical Engineering/Computational Engineering and Design at Southampton. He starts a placement with Rolls-Royce Motor Cars this month. “Volunteering at the UKSDC and GC competitions provides an invaluable opportunity to encourage students to see STEM [Science, Technology, Engineering & Mathematics] in its true colours.”

David, who has just finished the third year of an Aeronautical Engineering degree at Durham University, still recalls the inspiration he drew from the UKSDC himself: “Taking part in the competition sparked a strong obsession with space; I was drawn by the utopian, fantastical designs of future space settlements and enjoyed imagining life in such a future. I opened a space society at QE, which some OEs may remember, and attended the annual Student Space Conference in Year 12, a fantastic event organised by the same parent organisation as the Galactic Challenge, the UK Students for the Exploration and Development of Space (UK SEDS). At Durham, I’ve also joined the university’s SEDS branch where we had some great networking with brave local startups and have helped organise trips to the Student Space Conference. My first internship was in a small electronics company, as it was technically in the space sector.”

Although the internship proved to be a disappointing experience, during his time there he was able to re-focus on what he really wanted – “to pursue unprecedented and utopian technology design” – which led him into the field he is currently targeting, namely “minimal-fuel, lighter-than-air travel, in other words engineering modern blimps and airships!” It is, reflects David, “all a long chain of events from saying ‘yes’ to my friend asking me if I wanted to fill an empty space in the first QE UKSDC team, which I turned down at first because I was nervous!”

Sam has finished the second year of a Medicine degree at Southampton. He said: “It’s good to see kids taking an interest in these types of projects at this age – it develops skills they will need to solve the global problems facing us in the near future.”