The correct answer? The one you least expect! Extra-curricular surprises at the Maths Fest

Academic enrichment > News & Events > News > The correct answer? The one you least expect! Extra-curricular surprises at the Maths Fest 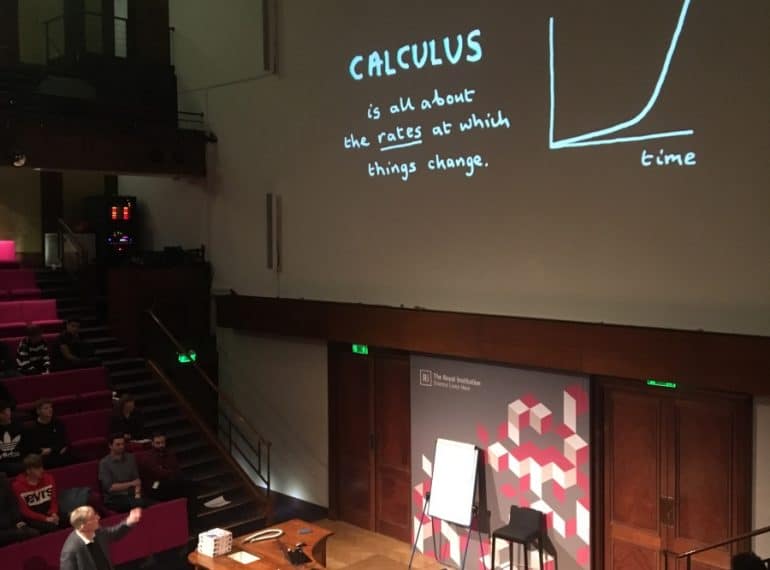 Fifty sixth-formers enjoyed an entertaining day getting to grips with Mathematics that ranged from the offbeat and entertaining to applications that were literally out of this world. 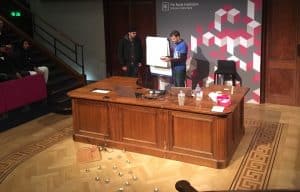 The Year 12 pupils headed off to the Royal Institution in central London for Maths Fest 2019 – a Mathematics festival for schools designed to inculcate a passion for the subject among young people. The event is the brainchild of mathematicians and speakers Matt Parker and Rob Eastaway.

Accompanying the Sixth Form mathematicians were Mathematics teachers Joelle Simpson and Karmen Chiu. Mrs Simpson said: “All in all, the day was a fantastic trip out for the Year 12s; whilst they did know much of the Maths discussed, it was then applied to fun and interesting real-life examples, and there were also many new mathematical concepts introduced.”

First up was the host, Matt Parker, who entertained the students by asking a member of the audience to pick any two-digit number. He then proceeded to fill a 4×4 grid with each row, column, the four corners and each 2×2 square adding up to the two-digit number. 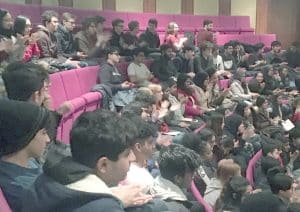 Science presenter Steve Mould then showed the audience 2D and 3D shapes of constant width that are not circles or spheres, before somewhat precariously riding a skateboard to demonstrate how easily he could slide along with these unique shapes. His most famous discovery is “self-siphoning beads”; a string of metal beads strung together on a chain, which, when released from its container, seems to defy gravity and move upwards before falling to the ground.

Joint host Rob Eastaway talked about Pascal’s Triangle (a triangular arrangement of numbers in which each number is the sum of the pair of numbers directly above it) and finding the ‘true centre’ of odd shapes. QE pupil Adam Hassan said: “Rob Eastaway’s lecture showed how we often make assumptions that are completely wrong, and sometimes the correct answer is the one that you would least expect it to be.” 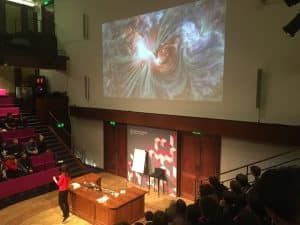 Astronomer Lucie Green discussed the sun – Ishveer Sanghera commented that he particularly enjoyed her application of Mathematics to the solar system, including calculating how much longer the sun would burn for.

Oxford applied mathematician David Acheson made an “hilarious video” on finding pi using equipment found around his home, Miss Chiu reported. He talked about vibrations and nodes on strings, before ending the day with a “fantastic solo on his electric guitar”. Pupil Karan Patel also enjoyed this lecture, “especially the maths behind the snowball’s radius increasing at a decreasing rate, as well as the pizza box experiment”.

Other QE boys enjoying the day included: Suleman Yusuf, who relished Matt Parker’s “insightful” exploration of the world of puzzles; Shangeay Senathirajah, who praised a “truly eye-opening experience” which showed how Mathematics is useful in day-to-day life, and Alejandro Lynch Gonzalez, who appreciated learning about areas of the subject not covered by the Mathematics curriculum.