Theory and practice: sixth-formers learn about the real-world importance of Economic Geography 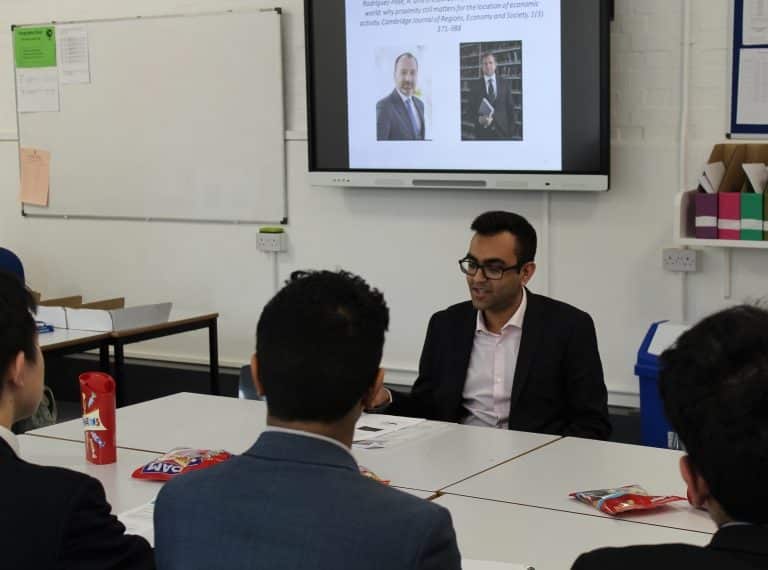 A young Elizabethan now forging a career in private banking with a global finance giant returned to the School to lead a Sixth Form discussion on Economic Geography. 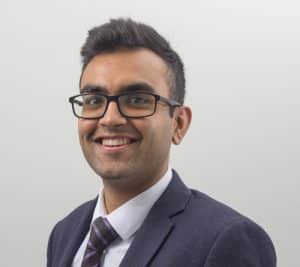 Hemang Hirani (OE 2008-15), who studied Geography and Economics at the London School of Economics and is now working for Barclays, gave a presentation to the select group of Year 12 geographers entitled The role of cities: an introduction to the field of Economic Geography.

Thanking him for his visit, Headmaster Neil Enright said: “This is an important aspect of alumni support – Old Elizabethans coming back to the School to help stretch the older boys academically by giving them an insight into, and a taste of, university-level material and discussion.”

In a lavishly illustrated talk, Hemang included: a satellite picture of Earth by night; a world map showing the growing percentage of the planet’s population in urban areas since 1950, and colour- 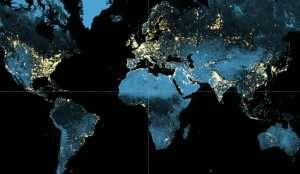 coded maps of the USA and India depicting the importance of cities in both advanced and emerging economies.

He considered an influential academic paper on the topic, taking the boys through theoretical aspects such as labour market pooling, input-output linkages and knowledge spill-overs, as well as examining complex equations used by economic geographers.

The event was organised by Geography teacher Anne Macdonald, who said Hemang also answered questions about university, including the experience of studying at LSE and the benefits of studying Geography and Economics as a combination. “Indeed, he explained that his new employers – Barclays Private Banking – indicated that one of the things that persuaded them to offer Hemang the job was the broad perspective he was able to offer as a results of having studied Economic Geography.” 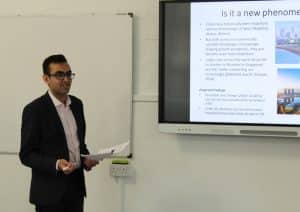 In his own time in the Sixth Form at QE, Hemang was a Senior Vice Captain. He has previously been involved in helping QE’s sixth-formers apply for Geography places at university.

In addition, during his time at LSE, Hemang was a Widening Participation Mentor, undertaking weekly visits to state secondary schools in the City of London area to help underachieving groups of Year 12 pupils with university applications.

He has been involved in volunteering ventures ranging from mentoring pupils at under-performing London schools to supporting poor cancer patients in Mumbai. 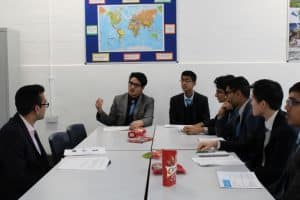 After graduating, he undertook a number of internships, including three months with Swiss investment bank and financial services company UBS as a Summer Analyst. He joined Barclays Private Bank in a similar role in June last year.

“I enjoyed my internship within the Real Estate Finance team and was offered a role to bridge the gap between the internship and the graduate programme starting this July,” Hemang said. “In the current role, we work closely with hedge fund and private equity professionals from a wealth management perspective.”