Voice of the pupils: Labour triumph in QE’s mock vote 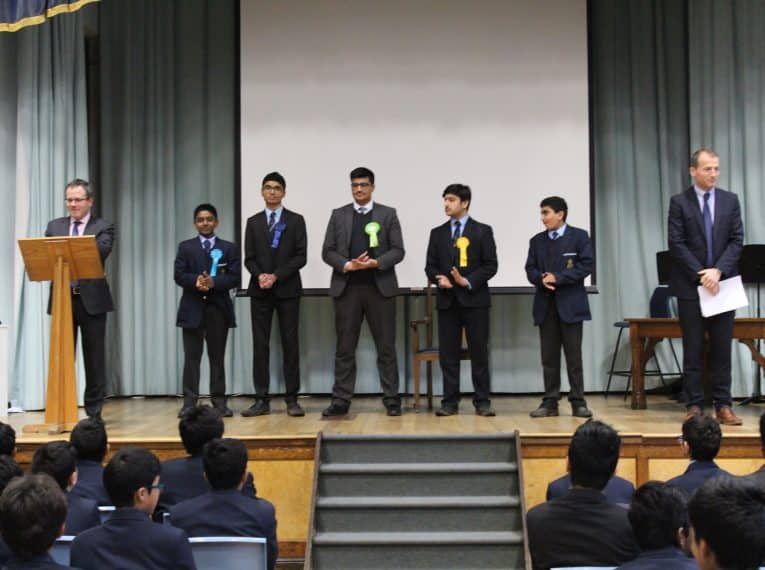 A mock General Election at QE has yielded a result that is starkly different to this week’s national poll.

With each of the School’s 56 forms deemed a constituency and all boys eligible to vote, Labour emerged from the QE election as the largest single party, winning 18 seats, yet it fell well short of the 29 seats needed for an overall majority. 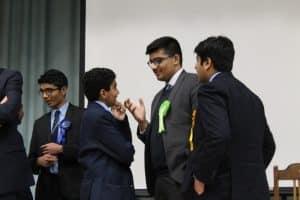 Following discussions, the Green Party – which came in third place, with 10 seats, behind the Conservatives, on 13 – entered a formal coalition, allowing Labour to form a minority administration, with further support from the Liberal Democrats agreed on a ‘confidence and supply’ basis.

The fifth party taking part – the Brexit Party – gained 5 seats, with 10% of the vote, in contrast to the actual General Election, in which the party failed to take a single constituency. 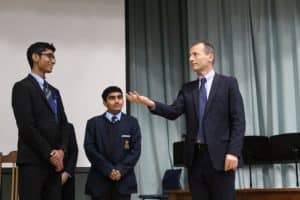 There was particular excitement in three forms where the results were tied. The winners of these seats were decided by the toss of a coin between the two tied parties. The Conservatives, Labour and the Liberal Democrats each won one seat in this way.

Headmaster Neil Enright, in his capacity as Chief Returning Officer, declared the results.

In the weeks leading up to the vote, each of the five parties taking part reviewed the full manifestos produced by their respective parties in the General Election and picked out five key pledges for the QE campaign. These were then arranged on posters that were displayed at the School. 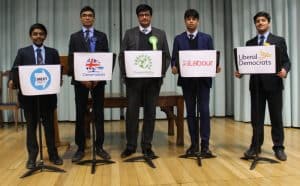 A lunchtime hustings was held earlier this month in the Main School Hall at which boys had the opportunity to question the five candidates, who were (pictured left-right): Year 9’s Ugan Pretheshan (Brexit); Year 11’s Ethan John (Conservative); Year 13’s Haider Jabir (Green); Year 12’s Eeshan Banerjee (Labour) and Year 11’s Sultan Khokhar (Lib Dem). The debate was chaired by Politics teacher Liam Hargadon – billed as QE’s answer to Andrew Neil – although since all the candidates turned up for the event, no ice sculptures were used!