Whether it’s Schumann or Metallica, making music makes a difference! 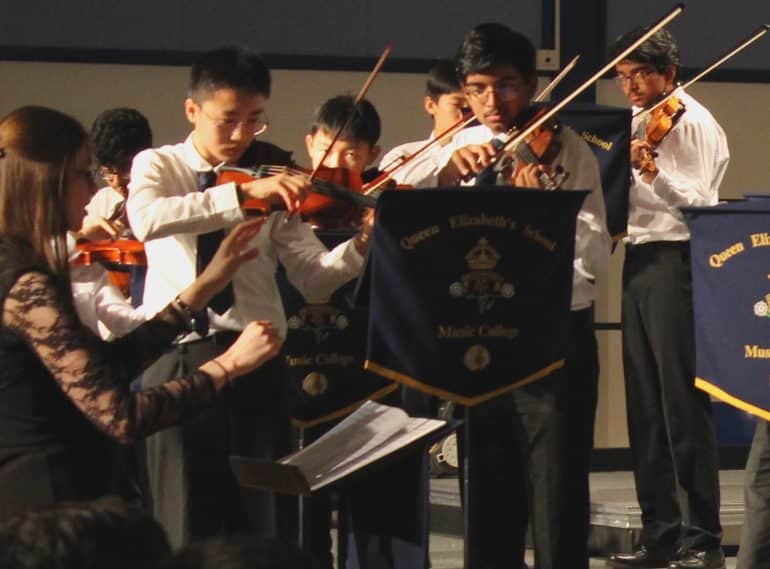 The School’s first large-scale concert of the academic year gave the junior ensembles the chance to showcase the repertoire they have been rehearsing since September. 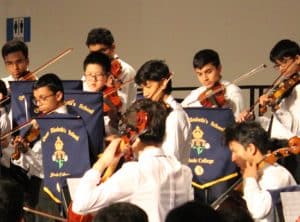 In her welcome to the Autumn Concert audience, QE’s new Director of Music, Ruth Partington, set out a powerful argument for the importance of participation in extra-curricular music.

The boys, including many from Year 7, then performed a programme that featured a truly eclectic mix of genres and styles, ranging from the Sinfonia’s playing of Schumann’s Träumerei to the Guitar Ensemble’s rendition of Metallica’s Fade to Black.

Miss Partington said in her address how much she had enjoyed her first few months at QE since joining the School from Canford School in Dorset.

She then pointed to the contribution that Music makes “to the development of soft skills, which are so important at interviews and in life generally.” Music, she said, “helps develop boys at QE into rounded scholars”.

Later in the evening, together with the Headmaster, Neil Enright, she presented Music colours to select boys in Years 8 to 10. 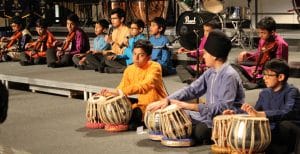 The evening began with the Concert Band performing John Williams’ Highlights from Harry Potter. After the interval, during which refreshments were served in the Dining Hall, the Sinfonietta also performed film music – Theme from Jurassic Park and Pirates of the Caribbean – before the Trebles & Altos rounded off the night’s entertainment with Queen’s Crazy Little Thing Called Love.

The audience in the Shearly Hall included a number of guests whom Sixth Formers were hosting from the High Barnet Good Neighbour Scheme, a voluntary service giving practical help to the elderly, sick and anyone finding it difficult to cope.

Next in the School’s musical calendar are the Christmas Concert on 10th December and the traditional Service of Nine Lessons and Carols at Chipping Barnet Parish Church on 18th December.