You are among the very best – now go into the world and help others: UCL Provost’s message to QE prize-winners

School performance > News & Events > News > You are among the very best – now go into the world and help others: UCL Provost’s message to QE prize-winners 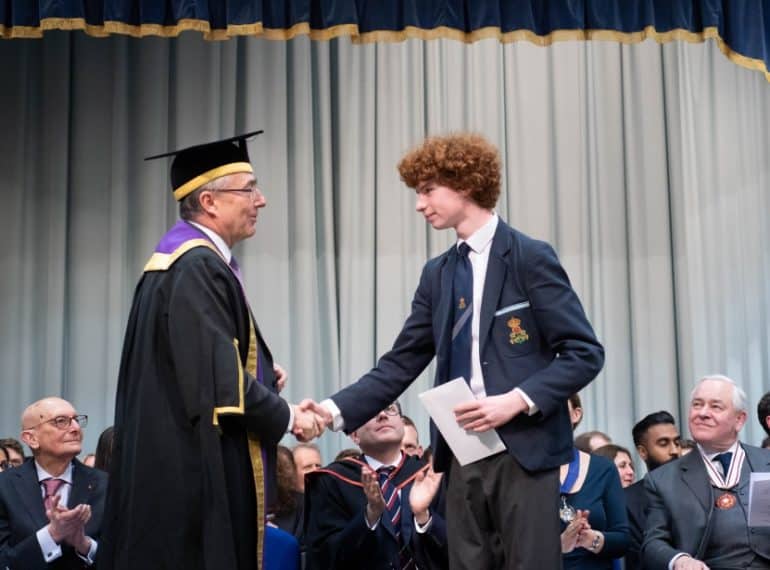 More than 130 prizes were awarded to boys in the top four years of the School at the 2019 Senior Awards Ceremony – one of the highlights of QE’s academic year.

Parents, prize-winners, VIP guests, governors and staff assembled in the School Hall for an evening in which the achievements and endeavours of boys were publicly celebrated in a formal ceremony punctuated by musical interludes performed by the School’s musicians. 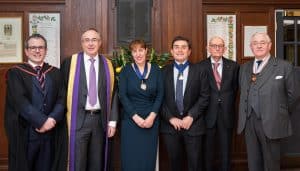 The Guest of Honour was Professor Michael Arthur, President and Provost of University College London. Since he took up his post in September 2013, nearly one hundred Old Elizabethans have taken up undergraduate courses at UCL.

Professor Arthur awarded prizes to boys in Years 10 to 13, which ranged from awards spanning the curriculum from Art & Design to Technology, to Sixth Form prizes for commitment and service. The extensive list of endowed prizes and special awards which were also presented reflects significant individuals and events in the School’s history. It includes, for example, two prizes named after former Headmaster E H Jenkins, the Bishop Broughton Prize for Divinity (the bishop, after whom one of QE’s Houses is also named, was a pupil in the late 18th century), and the Old Elizabethan War Memorial Prize.

The professor began his address by congratulating the high-fliers gathered before him: “You are the best of the best in this School, which, by definition, makes you among the very best in the country.” 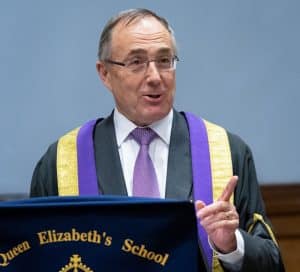 r prizes notwithstanding, all were still at an early stage in life, he pointed out. With regards to those leaving this summer, he quoted Churchill: “This is not the end. It is not even the beginning of the end, but it is, perhaps, the end of the beginning.”

He encouraged boys to apply to the best universities – particularly UCL, of course – where they would be taught to think critically, to understand what knowledge is and where it comes from.

Professor Arthur, who is a hepatologist, shared much of his own story, from being someone at school whose prize was for being ‘most improved’, to making his first medical discovery, related to diabetes. It was not necessarily his best research paper, he said, but one of the most cherished, giving him a “a very special feeling, realising that for a short time I was the only person in the world to know that thing”. 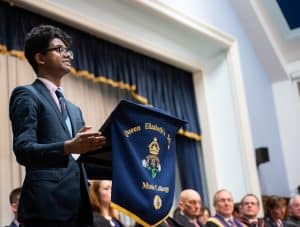 He encouraged the boys to “aim high” and “think big”, whilst also stressing the value of retaining humility. Citing former UN Secretary General, the late Kofi Annan, he spoke about the importance of making a contribution to society and the world, and helping those less fortunate – a theme also reflected in the vote of thanks delivered by the School Captain, Bhiramah Rammanohar.

Other notable guests at the ceremony included: the Deputy Mayor of Barnet, Cllr Caroline Stock (who, as well as congratulating the boys, expressed the pride that the borough has for the School and its achievements); her husband, Dr Richard Stock, who is an Old Elizabethan himself (OE 1967-75), and Martin Russell, the borough’s Representative Deputy Lieutenant. 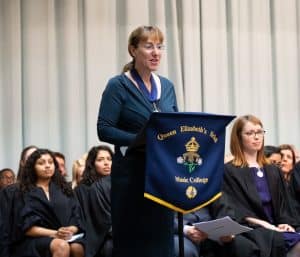 In his speech, after welcoming all the guests, Headmaster Neil Enright thanked the Foundation Trustees for their sponsorship of the awards and the Friends of Queen Elizabeth’s for their support both at Senior Awards and on many other occasions throughout the School calendar.

He first acknowledged the particular accomplishments for which the prizewinners were being rewarded, then told them: “A specific award does not, though, define you – nor should it restrict the celebration of your broader achievements.”

Reflecting on the fact that this year marks the quincentenary of the death of Leonardo da Vinci – “perhaps human history’s most celebrated and archetypal polymath” – he highlighted the “unquenchable curiosity” and “feverishly inventive imagination” that da Vinci was reported to have had.

“That is why we are so intent on encouraging free-thinking scholarship, critical questioning, and equipping you with the skills for life-long learning. 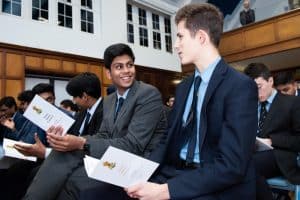 “Follow what you have a passion for; pick the subjects you most enjoy; embrace trying to learn new skills at School and outside it.

“These topics and interests can be eclectic. History shows us that many discoveries and inventions have come from the cross-pollination of ideas and experiences.

“This is, though, no argument against expertise, or eventual specialism. Indeed, I am sure that this wi 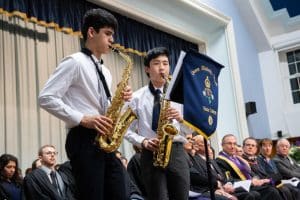 ll be the outcome for many of you.

“What I would encourage is for you to keep open and expansive minds; to continue, through your studies here, at university, in your careers and in your hobbies, to try and develop an expertise in a range of areas to make you as rounded individuals as possible.”

Music performed during the ceremony covered a number of genres, from Shostakovich’s Sonata in D minor Op. 40 for Cello and Piano, Movement 2, to two pieces composed by American saxophonist Gordon Goodwin.