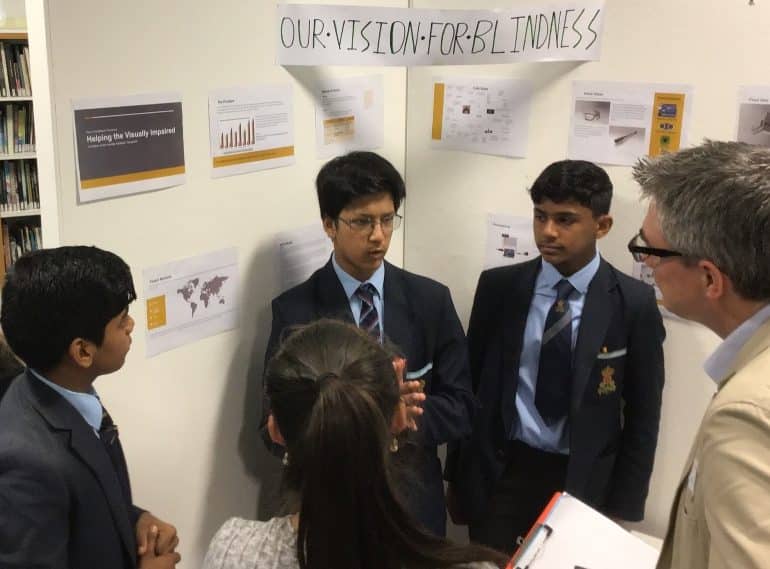 Three Year 9 boys are through to the national finals of the Big Bang competition after their idea for a hi-tech device to replace the white sticks used by the blind impressed both the judges and the visiting crowds at the London regional heat.

The boys’ Device to Aid the Visually Impaired is an ergonomic headset housing complicated circuitry that uses object-detection algorithms to warn users of hazards lurking nearby. 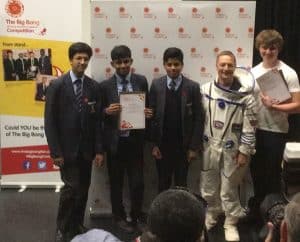 Aryan Jindal, Bhunit Santhiramoulesan and Ashwin Sridhar made full use of the opportunity to showcase their work and discuss it with spectators stopping by their stand at the Big Bang London Central event hosted by Westminster Kingsway College at Kings Cross. The Big Bang programme comprises a national Big Bang competition and a series of events across the country, all aimed at bringing STEM (Science, Technology, Engineering & Mathematics) to life for younger people.

Head of Technology Michael Noonan said: “The students created this device in our dedicated design area and they hope the project will help provide a cheap and affordable alternative to the stick and other measures that visually impaired people are currently offered.”

“The device proved to be a major hit among spectators and judges alike, so it was perhaps unsurprising that the boys succeeded in being selected for the Big Bang UK Young Scientists and Engineers competition next year, where they will present to thousands of visitors in the NEC in Birmingham.

“Suitably impressed by the demonstration of the technology, one computer scientist from a major company even left his contact details with regard to future collaboration: the company is looking at using the same type of technology in CCTV in large railway stations to help monitor who is using the facility and to detect potential threats to public safety.”

One of the trio, Aryan, said afterwards: “This was my first STEM [Science, Technology, Engineering & Mathematics] enrichment activity outside of School and I loved it! I was really nervous before the judges visited, but by the time we had to speak with them it was fine, and by the time the second panel came it was more like a conversation than a presentation. I can’t wait to go to the national finals and we will try to develop our work even further for this.” 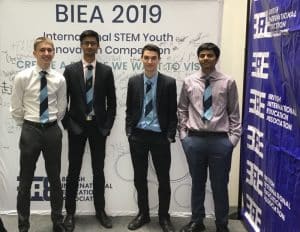 Also displaying their work at Big Bang London were a team of Year 12 students on the eve of their appearance at the finals of the International STEM Youth Innovation Competition at the Royal Air Force Museum in Colindale, London. Deeps Gandhi, Aryan Jain, Simon Sherriff, Ben Domb and Tarun Bhaskaran secured their place there by designing and building a glider drone to help in the conservation of black rhinos.

“It proved to be a useful exercise, as the boys had the chance to speak with fellow competitors and mentors from around the world, as well as preparing the final touches to their presentation for the following day and staging a practice flight,” said Mr Noonan.