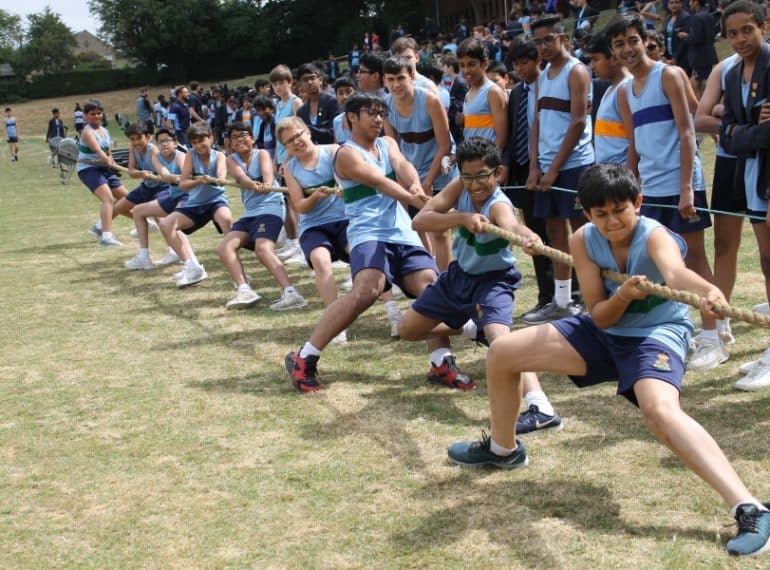 With nearly 100 separate events across disciplines ranging from tug-of-war and Eton Fives to table-tennis and volleyball, QE’s 2018 Sports Day once again saw hundreds of pupils competing for their Houses.

Harrisons’ emerged as the winning House, retaining its 2017 title, with Second Master Colin Price duly presenting the coveted trophy. The 668 points amassed by Harrisons’ placed it ahead of Leicester, on 622: the other four Houses were quite closely matched, led by Stapylton, which scored 576. 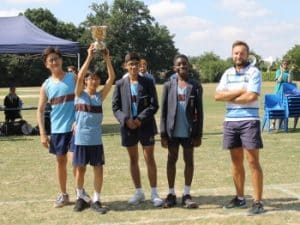 The whole day was supported by large numbers of staff, led this year by PE & Games teacher James Clarke (Head of Rugby).

The day concluded, as is traditional, with the staff participating in the QE Mile – a 16 x 100m relay. The staff team comfortably beat the Sixth-Form team into second place, with notable contributions including a swansong appearance from Mathematics teacher Gregory Lee (he is leaving this summer), who this year once again performed his leg in a suit. 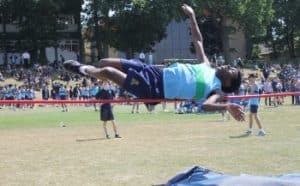 Headmaster Neil Enright: “I congratulate all the boys who achieved success for themselves and their Houses and I thank Mr Clarke and all colleagues involved for their hard work throughout the day.”

One notable quirk of this year’s Sports Day was the unusual attire of some competitors – not only Mr Lee, but also competitors running in their socks: one boy lost a shoe early in his 1500m race and even ran back to retrieve it, before eventually discarding it and then working his way up through the field to 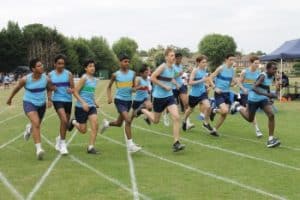 The day included 53 track events of varying length, from the 75m hurdles for Year 8 through to the 1500m individual races and the 4 x 400m relay open to all year groups.

Also continuing through the day were the field events, which included discus, shot put, 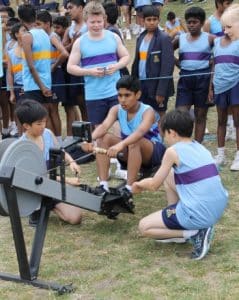 Years 7–10 each had their own tournaments for tug-of-war, tennis, Eton Fives and table-tennis (the latter taking place in the gym).

There were competitions for Years 9 & 10 in volleyball. The rowers battled it out in ten-minute sessions, with one machine allocated to each of QE’s six Houses.