Hot-seating and sword-fighting as a troupe calls 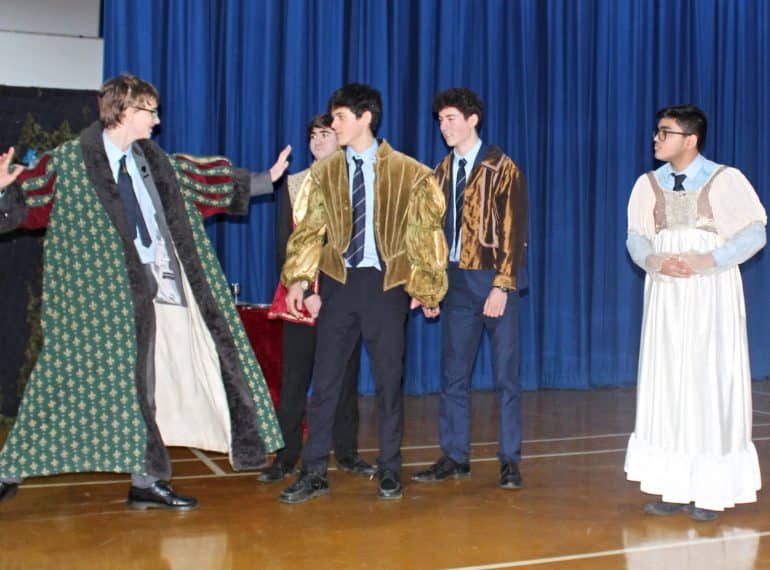 The Say Two Productions company performed Romeo and Juliet – a set text for Year 11 pupils – and J B Priestley’s An Inspector Calls, which Year 10 are currently studying. 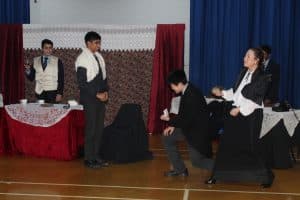 Head of English Robert Hyland said: “The majority of time in class has been spent looking closely at the linguistic and thematic features of the texts in a purely literary context. It is really important for the boys to be able to appreciate how the literary foundation of the classroom translates into the dramatic sphere of performance if they are to maximize their understanding of the texts.”

In addition to performing the plays, the accompanying workshop programme involved hot-seating – where a character in a play is questioned about his or her background, behaviour and motivation.

“Ordinarily in a performance, the audience and actors are kept separate. On this occasion the workshops led by Say Two were innovative in the way the company really encouraged students to engage in the process of understanding how the page translated to the stage, and the theatrical purpose of Priestley’s and Shakespeare’s writing,” Mr Hyland added.

Jeshvin Jesudas, of Year 10, praised the interactive way in which An Inspector Calls was shown and the hot-seating, which, he said, “helped us to understand how the characters actually felt and gave us a greater and wider understanding of the play”.

The boys were also encouraged to speak out the dialogue from various scenes and to consider the relationship between the characters and how the characters perceived themselves.

For Romeo and Juliet, an interactive staging in costume of the Capulet Ball (Act 1, Scene 5) and of the sword fight between Romeo, Mercutio and Tybalt (Act 3, Scene 1) helped show Romeo’s progression through the text, proving popular with the boys.

Sajeev Karunakaran, of Year 11, said: “It was a very enjoyable performance that expanded my knowledge of the play. I enjoyed the open discussion on the key themes of the play, and the best parts were the interactive activities like the sword-fighting.”

Afterwards, several of the boys gave their views on Say Two’s visit: