“Love is oblivious to the outside, even with an audience of millions”: George the Poet and the royal wedding

Alumni > News & Events > News > “Love is oblivious to the outside, even with an audience of millions”: George the Poet and the royal wedding 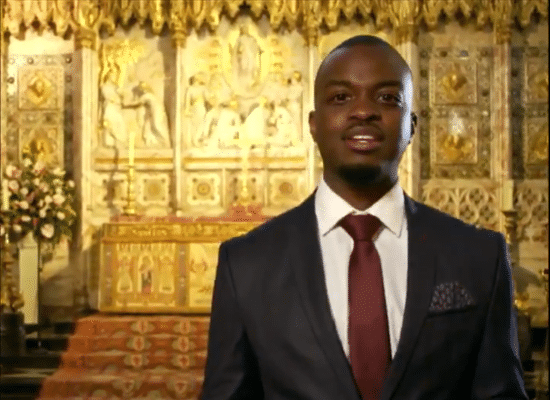 Old Elizabethan George the Poet’s latest composition was hailed as a fitting introduction to the global television coverage of the royal wedding.

George Mpanga’s performance of The Beauty of Union was chosen by the BBC to introduce the day’s coverage and was therefore seen by a global TV audience that experts were predicting could reach 1.9bn.

The pre-recorded film of George reading the 154-word poem at St George’s Chapel, Windsor – the wedding venue – was intercut with scenes of Prince Harry and Meghan Markle. His contribution was reported by journalists worldwide – the Toronto Sun’s Jane Stevenson said it immediately drew her in to the coverage, for example – while also being hailed by many on social media.

George (OE 2002–2009) is linked with Prince Harry through his role as an ambassador for Sentebale, one of the prince’s charitable foundations, which supports the mental health and wellbeing of children and young people affected by HIV in Lesotho and Botswana. Having seen at close-hand the prince’s warmth and compassion in meeting the children helped by Sentebale, when the royal engagement was announced last year, George was one of the commentators interviewed by the BBC for an insider’s perspective.

George’s growing national profile as a poet rests in large part on his work commenting on major issues of the day. In 2017, he released a video showing himself reading a poem on hate crime. The video was produced in collaboration with the Equality and Human Rights Commission to coincide with the anniversary of the murder of MP Jo Cox. He also performed in front of the Queen and Prime Minister Theresa May at the Service of Celebration for Commonwealth Day in Westminster Abbey.

After leaving QE in 2009, George read Politics, Psychology and Sociology, at King’s College, Cambridge. He maintains close links with the School: last year, he was a well-received guest speaker at QE’s formal luncheon for Year 12 pupils and also led a poetry workshop for the whole of Year 9.

The poem is set out below: a video of George performing it may be viewed on the BBC twitter feed.

The Beauty of Union

There’s an indescribable beauty in union
In two beings forming one new being
Entering each other’s world
Surrendering each other’s selves
Accepting the invitation to be everything to someone else
There’s an unparallelled bravery in union
In telling the one you love:
“The only way that we can truly win
Is if I think of you in everything I do
And honour every decision you faithfully include me in.”
Love gives union true meaning
It illuminates the path
It wants us to compromise, communicate and laugh
It wants us to elevate, appreciate without pride
Love is oblivious to the outside
Even with an audience of millions
Even when that love bears immortal significance
All of this is met with cordial indifference
By the two people at the heart of it
Two individuals when they started it
Becoming two halves of one partnership
Such is the beauty of union
Such is the beauty of union