So you want to be a lawyer? Different routes to the same goal outlined by visiting old boys

Alumni > News & Events > News > So you want to be a lawyer? Different routes to the same goal outlined by visiting old boys 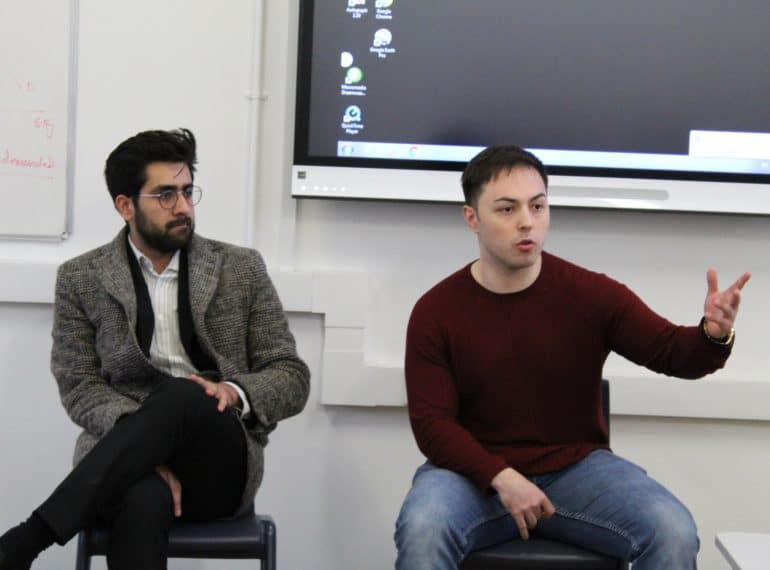 Senior boys gained valuable insights into how to pursue a career in Law when two alumni visited the School – with both stressing the importance of preparation and persistence.

Izzet, who is a Future Trainee Solicitor at London-based multinational law firm, Slaughter and May, graduated with an LLB in Law from the University of Warwick before completing an MPhil in Criminology at Cambridge. He told the boys he was the first person in his family to go to university.

Suraj followed an alternative route, reading History at Warwick before being recruited by Hogan Lovells, which has joint headquarters in London and Washington. He is a Trainee Solicitor. “For me, it was a natural transition from a History degree to a flexible Law conversion. It does not matter too much if you do not start by pursuing Law degrees as you can often provide different angles at work,” he told the boys. “Just make sure you pick an essay-based degree that you enjoy – both the direct and indirect routes into law are viable.”

Both of them urged boys interested in a future in the profession to apply for vacation schemes and to establish networking opportunities as soon as they could: “Face-to-face networking at dinners and other events from as early as possible pays off as it will help one to take one’s career to the next level,” said Izzet.

While studying, both Izzet and Suraj applied for internships as part of the highly competitive vacation schemes. Izzet spent two weeks with Latham & Watkins, while Suraj won a place with Allen & Overy.

They spoke to the boys about the transition from university to employment and the difference between academia and the world of work. Suraj also addressed the differences between a barrister and a solicitor and the distinctives of criminal, commercial and family law.

Izzet said: “A Law degree is very challenging and is often different to what students expect.” Suraj added: “Practicing is also quite a different experience from studying, but very fulfilling when one gets the opportunity to work with respected companies to make a positive difference.”

Both of them reflected on the importance of becoming a well-rounded person. “As well as engaging with the valuable academic studies on offer at QE, it’s important to make the most of a rich variety of extra-curricular activities such as music, sport, Young Enterprise or charity work. This is often what will set you apart from other candidates when applying for jobs,” said Izzet.

The session ended with Q&As, with boys asking questions ranging from how difficult it is to gain a training contract to queries about working hours. The boys were advised not to become too disheartened if they received a few rejections in what is a highly-competitive field. “My advice is apply early and make sure you are aware of the different schemes, their opening dates and their deadlines. And keep trying!” said Izzet.

Izzet and Suraj agreed that pursuing a degree helps to improve one’s research and advocacy skills and said it was encouraging that that people can, and do, come into the profession from all different backgrounds.

“It is a great career choice,” said Suraj, “because I learn something new every day and learning does not stop.”