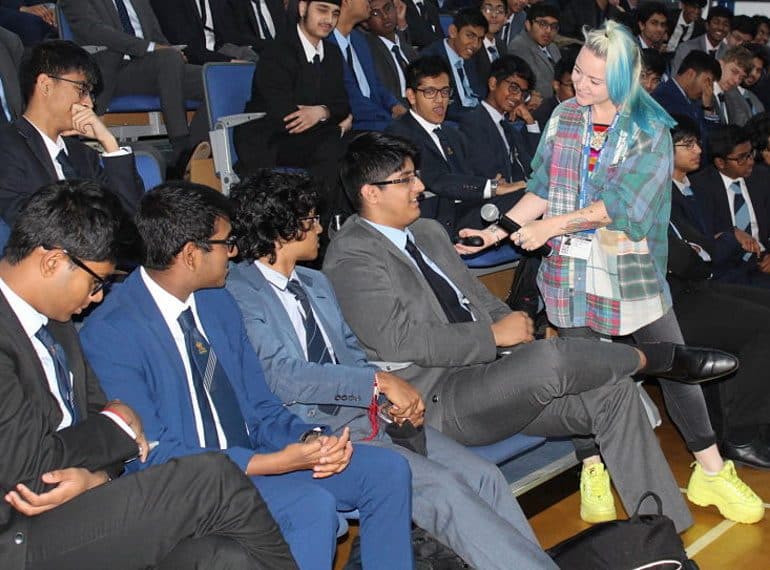 Society and the mass media are the source of stereotypes that lead to prejudice and discrimination, an LGBT activist told QE’s senior pupils.

Jessica Amery, from Haringey-based charity Wise Thoughts presented an assembly on LGBT issues to Years 11-13 in the Shearly Hall. 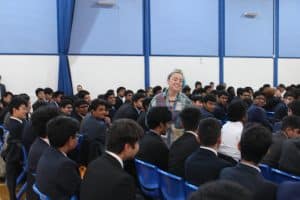 She told the boys that although she had a transgender parent, she nevertheless faced homophobia when coming out as a lesbian.

And she pointed out the ways in which LGBT people’s mental health is at risk. According to research, she stated, schoolchildren hear ‘that’s so gay’ every 14 minutes: “Every time it’s said, it’s like a little stab to the LGBT community.”

Jessica began her talk by asking the boys to take 10 seconds to think about how comfortable it is to talk about LGBT. Then she asked them to take another 10 seconds to discuss stereotypes, explaining that stereotypes are defined by ‘putting someone in a box’ – for example, ‘you are gay if…’

Such phrases create fear, making people feel it is unacceptable to hold hands or touch those who are gay, she stated, adding that stereotypes result in segregation. Stereotypes, prejudice and discrimination are thus all part of the same picture, she said.

Some 50% of LGBT people experience bullying, which Jessica defined as including texts, social media messages, people ignoring you or making comments. LGBT students have the highest rate of truancy and homelessness, and their education also suffers disproportionately, she said.

Headmaster, Neil Enright said: “This was an important assembly on tackling homophobic, biphobic and transphobic language. There will be some pupils for whom this is deeply personal, whilst for others it is about understanding the lives of those with different experiences to them and being tolerant, supportive members of the School community and wider society.”