Stay curious and beware the bubble! 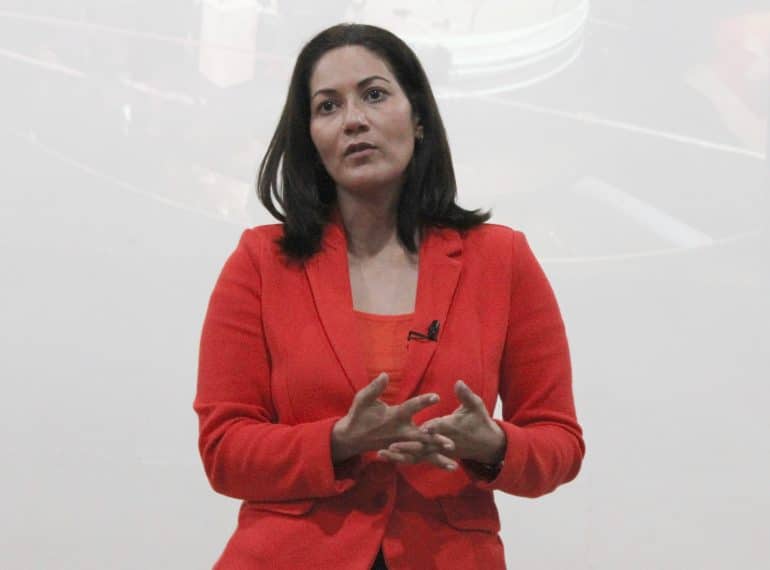 BBC presenter Mishal Husain explained to QE’s Lower School boys how following her own ambitions and focusing on excelling at every stage of her career had brought her success as one of the UK’s best-known and most-respected journalists.

A news presenter for BBC Television and BBC Radio, Mishal is a host on Radio 4’s influential Today programme and is a familiar face around the world thanks to her work on BBC World News’s Impact programme.

She has a number of ‘firsts’ to her name. She was Today’s first Muslim presenter and the BBC’s first Washington news anchor. When she met Aung San Suu Kyi in 2013, she asked the Burmese politician – a Nobel Peace Prize laureate now widely considered to have fallen from grace – about the plight of the Rohingyas. She believes she was the first journalist to have done so. 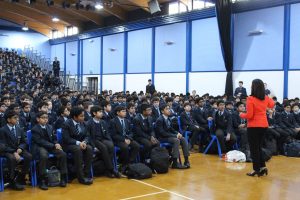 In her talk to Years 7–9, she spoke about how, in the face of her parents’ wishes that she become a doctor, she had instead pursued a path as a journalist.

She recounted highlights of a career that has taken her to places – including many dangerous locations – all over the world.

Mishal, the author of two books on achieving career success, also devoted considerable time to answering the boys’ questions, having first stressed to them the importance of maintaining a questioning approach in life – an attitude that was, of course, critical to her career as a journalist and interviewer, but was also important more generally, she said.

If there was one message she could impart to the boys, it would be: “Keep your minds as curious as they are now.”

While acknowledging that “we are all a product of our own bubbles” – affected by social influences, families, our education and so on – she urged boys to push against this as much as possible.

Headmaster Neil Enright said: “I am sure the boys will have taken away from her talk a great insight into the world of broadcast journalism, as well as much good advice, applicable to them whatever their individual ambitions and aspirations may be.”

“We constantly seek to raise awareness among our boys and their families of the enormous range of opportunities that are open to Elizabethans. Mishal showed our Lower School boys what success can be achieved by following your interests and playing to your strengths – a message that reinforces what they hear from their teachers and one that I hope they found inspiring.”

Born in Northampton to parents originally from Lucknow in India who later migrated to Pakistan, Mishal moved to the UAE at the age of two, where her father worked as a doctor. She was brought up in Abu Dhabi and Saudi Arabia, before she was sent to Cobham Hall boarding school in Kent.

She studied law at Cambridge and then went on to take a Master’s degree in the discipline at the European University Institute in Florence, having settled on Law as a good ‘in between’ subject – one that was respected, even if it was not Medicine.

Yet after university, she sought out opportunities in the media. After starting at Bloomberg Television, she joined the BBC as a junior producer in 1998.

It was, she said, almost the case that she had to appear on national and international television as a broadcast journalist before her parents would accept her not having followed in her father’s footsteps. 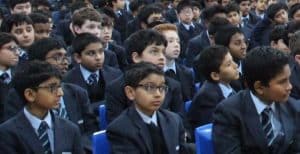 She told the boys how difficult it is to become a presenter – an aspiration held by many, but realised by few. “You may start off doing something far from your dream job… but those willing to give everything on a menial job are those that get noticed, and good things come to them: you’ve got to excel at what you are doing today.” Thus, while she harboured ambitions to present on the Today programme – recognising it as the pinnacle of its kind – she focused in the meantime on being the best journalist she could be, before eventually achieving this aim in 2015.

Being on the programme had taught her resilience: “You do an interview, come off-air and then get torn to pieces online.” But she is now better able to take the peaks and the troughs. When things go wrong, she takes from it the lessons that need to be learned, but then turns the page, not dwelling on her mistakes.

Through it all, her passion for the importance of impartial journalism in the 21st century remains not only undimmed, but, if anything, strengthened. In an interview this month for The Sunday Times Magazine, she told interviewer Donna Ferguson: “The purpose of news, I think, is to search for the truth without fear or favour. To do my job well, I need to be able to put my own opinions aside and be open to arguments of different kinds, and to treat them fairly. This era where established news organisations have been attacked and come under unprecedented pressure has reaffirmed why I wanted to go into journalism in the first place.”

Married with three sons, Mishal lives in north London. She is the author of two books – The skills: from first job to dream job – what every woman needs to know and the recently published The skills: how to win at work (copies of which she donated to the School).

After her visit, she posted a message on social media praising the boys for “listening intently” to her talk.