Celebrating diligence, flair and true scholarship in all its diversity 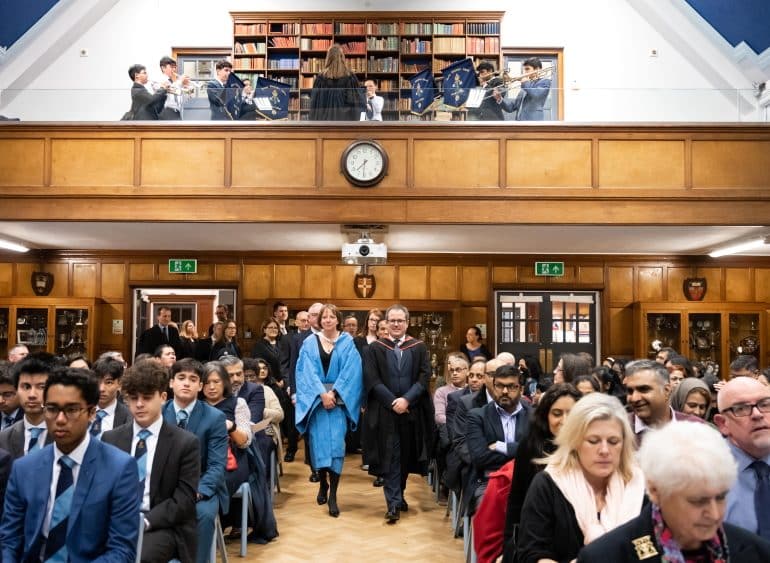 More than 60 boys received prizes for commitment and excellence across a wide field of endeavours at the 2020 Senior Awards Ceremony. 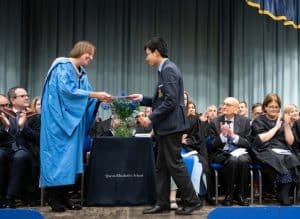 Guest speaker Professor Shearer West, Vice-Chancellor and President of the University of Nottingham, handed awards to boys from Years 10, 11 and 12.

In a break from recent tradition, prizes were not awarded to pupils in their final year at the School. A new valediction ceremony has been instituted for Year 13 in June instead, to take place immediately following their A-level examinations.

Explaining this “conscious uncoupling” in his speech, Headmaster Neil Enright said: “This provides us with more opportunity to celebrate the achievements of the current Year 12 tonight, and a timelier juncture at which to say goodbye to those boys and their families who have reached the end of their seven years at the School.” 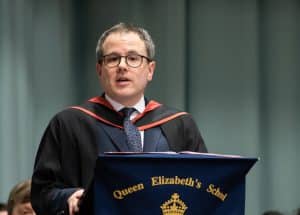 Mr Enright told the prize-winners from Years 10–12 that they should be proud not just of their performance, but also of their attitude and of their contribution to School life. “You have stood out for the levels of commitment and excellence that you have displayed over the last year – in your academic studies, the performing arts, in the sporting arena and in your service to others in this community. Your hard work and application have seen you make yourselves role models for your peers and for those younger boys in the School who look up to you.”

He also paid tribute to the staff, observing that their own dedication, attention and care had enabled the boys to fulfil and further extend their great potential. This potential may lead boys down many different paths, noting the different expressions of scholarship as witnessed among Old Elizabethans.

He told the boys in the audience: “I am conscious that we need to make sure that we celebrate the diverse involvements and talents of pupils throughout the School; to encourage you to follow your interests and passions, to try out new enrichment activities, and to support you to develop and communicate those new ideas and new solutions that are the evidence of the free-thinking scholarship that we hope to inculcate.”

Scholarship could seem like a “heritage brand”, with its associations with old professors, dusty books and ancient libraries. While there was nothing wrong with any of those things, it was important to recognise that scholarship comes in many different forms, he said, spanning the sciences as well as the arts, featuring creativity and the emotional, as well as the empirical.

Mr Enright spoke of the need for young people to be able to communicate their views “away from the cauldron of social media”, to encourage independence of thought. “We need safe spaces, less to protect young people from ideas, but to allow them to try out bold new ones – to offer those new insights and new solutions.” 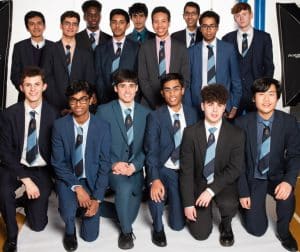 He concluded by reassuring the boys present that they were on track: “The awards you are about to collect are evidence of this. We want to ensure that you are best equipped to adapt to the modern, changing world and, perhaps, to help adapt it for the better; to help you to be open-minded, as we need to be, to the full diversity of options available to you, and to reflect and to celebrate the different expressions of scholarship and achievement as we now find them.”

Guest speaker Professor West was born and raised in a small town in south-west Virginia, where her father was a factory-floor supervisor and mother a high school teacher. She was the first in her family to attend university, thus mirroring the experience of many Old Elizabethans and the aspirations of many current pupils.

In 2008, Professor West was seconded to be Director of Research at the Arts and Humanities Research Council. She was appointed Head of the Humanities Division at Oxford in 2011, where she oversaw the launch of the Oxford Research Centre in the Humanities. In 2015, she became Provost and Deputy Vice-Chancellor at the University of Sheffield, before taking up her current post at Nottingham in 2017.

Professor West began her Senior Awards speech by quipping that she had almost, but not quite, matched QE’s School colours with her bright blue robe – noting that it was her St Andrews’ doctoral robe. She described her own journey from a community where most people worked in a factory or on tobacco farm, to her current role. “I realised that education could lift me out of a life of limited opportunity,” she said. She said her own parents had been very supportive and she stressed the importance of parents and families encouraging their children’s aspirations.

She advised boys to follow their passions: “This will set you up well! Do this and things will work out… Take me as an example. History of Art is supposed to render you unemployable, but I have had a great career!”

She adjured boys never to underestimate the value of hard work and also to consider seriously any chance to study abroad. “It’s a really great opportunity and experience. I came to St Andrews for a year as an undergraduate, returned to do my PhD and then never left the UK!”

She spoke of some of the challenges in the world today, such as climate change, AI and its potential disruption to jobs, political extremism and social media, but declared herself very hopeful that the young generation’s values of equality, diversity and service would help society address those issues. 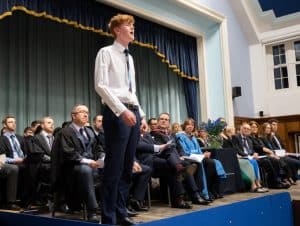 The evening’s proceedings were punctuated by musical interludes, which included the March from Handel’s Scipione, as well as a song, Fauré’s Au Bord de l’Eau, sung by Year 12’s George Raynor.

“The whole event was very enjoyable,” said Mr Enright afterwards. “The music was excellent – it is rare that one of the musical interludes is a vocalist, but George did very well.”

Giving the vote of thanks, School Captain Ivin Jose said: “As we sit here today, it is important for us to question how we can best contribute to our society. How can we fulfil our great potential? And how can we strive to be honest, selfless and compassionate human beings?” He asked the boys to consider: “How do we move from being gifted amateurs to active participants and game-changers?” He suggested that what they must do is to try.

“Our society is not perfect, it has its fair share of flaws and problems but, maybe, all it needs is a little inspiration, a little spark of creativity from those brave enough to try. Why can’t that be us?”