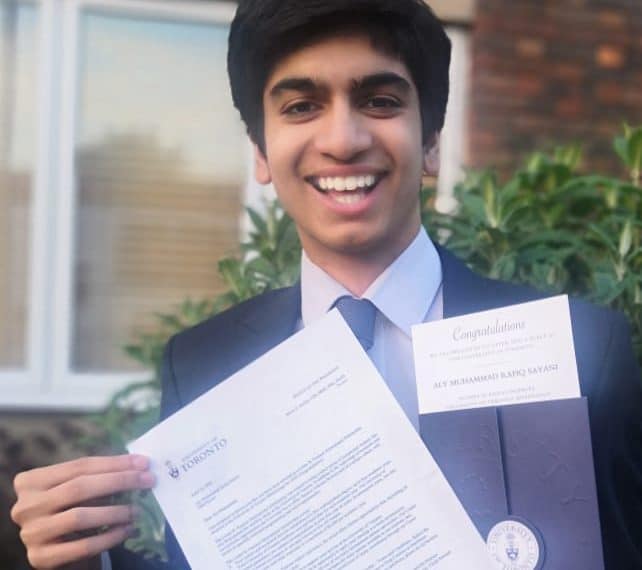 Aly Sayani has won a sought-after scholarship to the University of Toronto, one of only 37 applicants from around the world to taste this success.

The coveted Lester B Pearson International Scholarship will cover Aly’s tuition, accommodation, materials and living expenses for the four years in which he reads Social Sciences at the Mississauga campus. 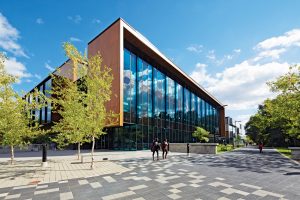 The letter he received offering him the scholarship also specified that in addition to the wide range of academic and co-curricular opportunities the university has to offer, “Pearson Scholars become part of a unique cohort, with access to specially enriched programming and select opportunities.”

Headmaster Neil Enright said: “We are naturally delighted for Aly on his successful application for this prestigious scholarship. I am always pleased to see our boys exploring overseas opportunities at top universities, and we believe he is the first Elizabethan to take up an undergraduate place in Canada.

“This has been a remarkable year in more ways than one: quite apart from the challenges posed by Covid-19, we have 40 boys with Oxbridge offers – a School record – and many others who will take up places on prestigious courses at Russell Group universities.”

The Lester B Pearson scholarship programme is intended to recognise students who demonstrate exceptional academic achievement and creativity and who are acknowledged as leaders within their schools.

Aly, of Year 13, says: “I am immensely grateful and honoured to be a recipient of this scholarship. I was born in Karachi and raised in cosmopolitan London; I look forward to continuing to experience a wide range of beautiful and vibrant cultures, traditions and communities in the multicultural city of Toronto. I hope to learn how I can tackle problems such as poverty, inequality and climate change through my time at U of T.”

On its website, the University of Toronto says: “A special emphasis is placed on the impact the student has had on the life of their school and community, and their future potential to contribute positively to the global community.”

Only overseas students can apply for the scholarship, which is named after a former Prime Minister of Canada who in 1957 was awarded the Nobel Peace Prize for helping to resolve the Suez Crisis.

Students’ applications must be supported with a strong recommendation from their school and the university will only allow one applicant from any school.

In writing a letter to support Aly’s application, QE Assistant Headteacher and Head of Year 13, Michael Feven highlighted the many ways in which Aly met and even surpassed the criteria. He passed nine out of his ten GCSEs with the highest possible grade and also received the top grade for Mathematics, History, Economics and French at AS Level.

Mr Feven continued: “I cannot recommend Aly highly enough. He is a hard-working, ambitious and scholarly pupil, one who I have complete confidence would be appropriate for a programme such as yours. Academically, he ranks among the brightest that the UK has to offer.”

He went on to describe Aly’s activities within School and in his home community, where he supports the Ismaili community, acting as a youth club team member and chairman. “Additional evidence of his excellent community contribution can be demonstrated in his role as a volunteer at Hillingdon Refugee Support Group. Here, Aly has helped to lead and organise life skills sessions for refugees fleeing conflict to help them settle into new lives in the UK.”

Aly was one of the School’s prefects in 2019 and played his part in monitoring younger boys at breaks and events. “His willingness to give up much of his free time over the year to support the smooth running of the School’s celebrations, open evenings and charity events is symptomatic of his engaged community spirit,” concluded Mr Feven.