Game theory: from football to Economics… and Brexit! 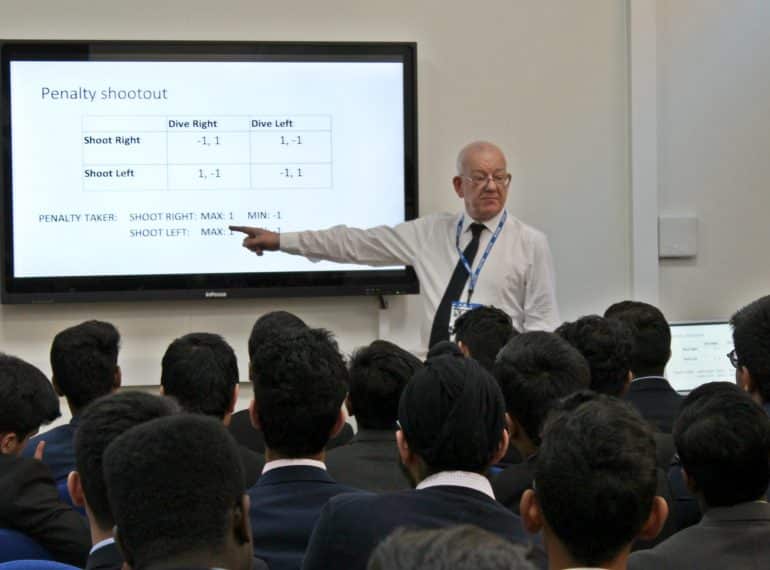 A visiting historian and economist set out how game theory applies across a very wide range of human activity in a lecture to senior boys – while also giving his own views and predictions about Brexit.

Dr Steve Davies is Head of Education at the Institute of Economic Affairs and has previously held academic roles in both the UK and US. He has authored several books, including Empiricism and History (Palgrave Macmillan, 2003) and was co-editor with Nigel Ashford of The Dictionary of Conservative and Libertarian Thought (Routledge, 1991).

In his lecture to senior boys, he illustrated applications of game theory in football, TV game shows and in oligopolies (where a market or industry is dominated by a small number of large sellers). Game theory is the study of mathematical models of strategic interaction between rational decision-makers.

Shamendra Uduwawala, Head of Economics, expressed his gratitude to Dr Davies for his visit, saying: “Game theory is a fascinating area of study, and he contributed significantly to our boys’ understanding of it by using such diverse and interesting examples. It was also good to have his own, well-informed perspective on Brexit, which complemented the lecture given here recently by Clément Leroy, a Research and Policy Engagement Associate from UCL’s European Institute.”

Himself a keen Manchester City fan, Dr Davies chose the penalty shoot-out at the end of the 2008 Champions League final between City’s local rivals Manchester United and Chelsea to illustrate game theory in the sport. United won the match after the team’s goalkeeper Van der Sar first pointed to his left, but then dived to his right, correctly guessing that Chelsea’s Nicolas Anelka would shoot that way. Van der Sar saved and United duly won European football’s top prize.

Dr Davies also looked at game theory in the game show, Golden Balls, and at the dilemma faced by two suspects interrogated for crimes, where they must choose whether the best thing for themselves is to confess, stay silent or betray the other prisoner.

Turning to oligopolistic markets, he examined the issue of such markets involving just two firms. Both firms could benefit from both having high prices, but one will always try to undercut the other firm by lowering prices, he pointed out. This problem could be overcome by collusion, although that is illegal.

Dr Davies also digressed to talk about Brexit. Stating that there was an impression of widespread panic about it within business, he blamed the media because he said they were predicting – incorrectly, in his view – that desperate shortages are inevitable. In terms of companies stockpiling, this is usual in any time of uncertainty and is not uniquely or solely about Brexit.

Alluding to the current febrile political atmosphere, with much plotting going on in Westminster pubs, he noted the similarity to the 1885 general election, the first to be held after an extension of the franchise which meant that for the first time, a majority of adult males could vote.

There would be, he predicted, no second referendum, since a majority of Parliament is against it. A cross-party deal will form – to secure outcomes such as ‘Norway plus’ or continuing membership of the customs union – but he forecast that major splits will continue to happen as the March 29th Brexit deadline approaches.