Leading lights of the charging brigade 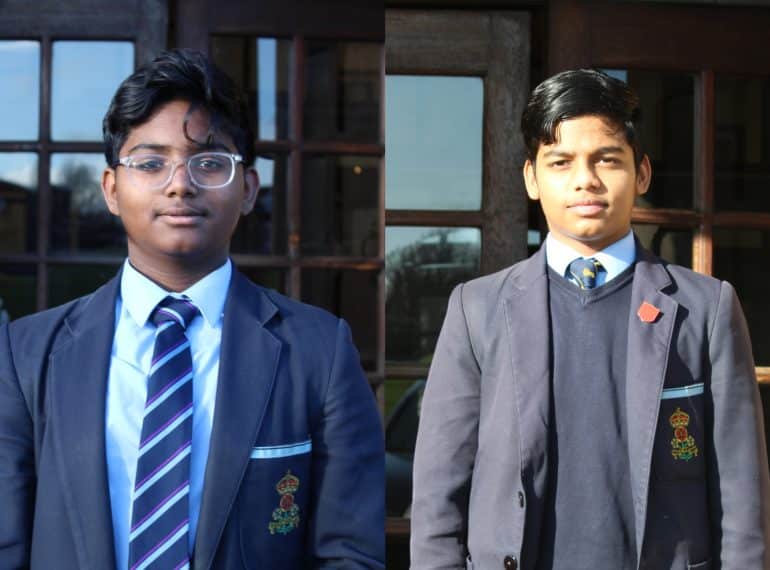 Two QE boys are among the prizewinners in a national competition aimed at finding better designs for electric vehicle charging points.

Year 8’s Tharsan Nimalan won a prize in the seven–14 category, while Ashwin Sridhar, of Year 10, achieved success in the 14-–19 age group in the Eco-Innovators Competition run by the Government’s Office for Low Emission Vehicles (OLEV).

Their success came as the Government announced that a ban on selling new petrol, diesel or hybrid cars in the UK would be brought forward from 2040 to 2035 at the latest. Prime Minister Boris Johnson made the announcement as the country plans to host the annual United Nations climate change summit, COP 26, which is being held in Glasgow in the autumn.

The brief for the competition was to create a design for on-street electric vehicle (EV) charging points that were innovative, iconic and beautiful. At QE, entries were handled jointly by the Geography and Technology departments.

Geography teacher Nilisha Shah said: “I congratulate Tharsan and Ashwin on their success. As the Government’s announcement shows, universal use of electric vehicles is an idea whose time has clearly come, yet there is still much work to be done in making our cities ready. Innovative, creative thinking such as Tharsan’s and Ashwin’s is likely to prove essential if the UK is to get the infrastructure right.”

Tharsan went through a number of design ideas and drafts before settling on his submitted design, which was based upon a large tree. The trunk had a spiral staircase which users could walk up to reach lounge-style leisure facilities – perhaps a restaurant – at the top of the “tree”.

The intention behind this, he explained, was to help EV users pass the time whilst their vehicle charged and even make the charging point a desirable destination – thus overcoming the perceived drawback of electric vehicles that users would have nothing to do while re-charging. Tharsan wanted, in fact to make non-electric car users “jealous of the experience they could be having”.

His design involved the use of lightweight, more sustainable and recyclable metals and other materials, with green planting on the roof. Vehicles would be parked around the base for charging, with cables pulled down from the trunk and plugged in wherever the connection point is on a vehicle.

Ashwin designed a charging station with a “contemporary aesthetic” and a “self-maintaining garden to absorb pollution”. He envisaged a vertical garden some 3 metres high which would collect rainwater and self-irrigate, featuring green plants and mosses that are good at capturing carbon.

Ashwin envisaged targeting high-pollution areas in terms of locations for his charging station, which would also be designed to provide easy access.

Even before learning about the competition, Ashwin had already been thinking about charging point designs, having seen existing ones around London and thought that they could be made better. “They should be more than charging points,” he said, pointing out that ones created according to his designs would not only help “green” the urban landscape, but could usefully act as a source of information, for tourists, for example. Since so many charging points were going to be needed, it was important to get more functionality out of the space.