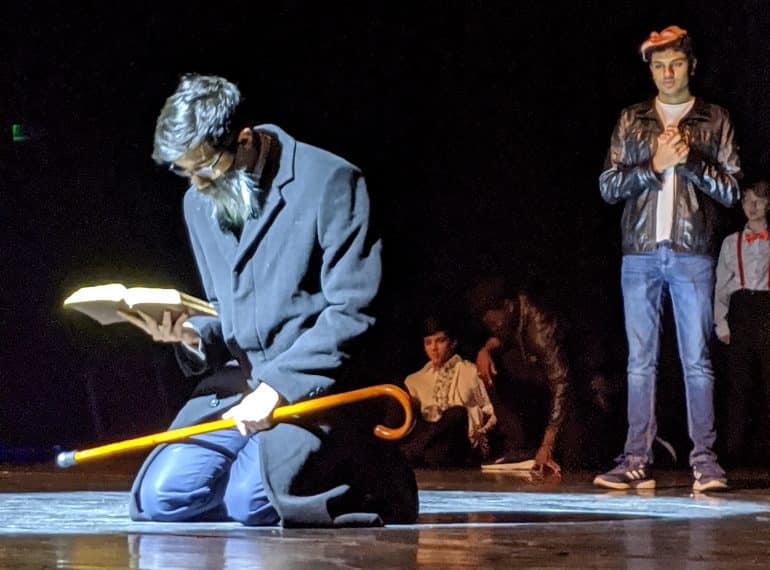 QE’s actors tackled the challenging issues in one of Shakespeare’s most controversial plays head-on in their production of The Merchant of Venice. 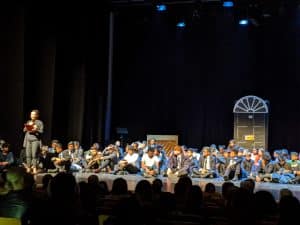 And Assistant Head (Pupil Development), Crispin Bonham-Carter, in turn, lauded Gavin Molloy, from QE’s external drama partners, RM Drama: “Our excellent theatre director-in-residence updated the story with an edgy, modern, Italian urban setting, which made the anti-Semitic storyline all the more shocking and relevant. Our mixed-aged cast really rose to the occasion.”

“Rivu Chowdhury, as Shylock, found real depth and nobility in this complex and tragic role,” added Mr Bonham-Carter, who was himself a well-known professional actor before becoming a teacher. 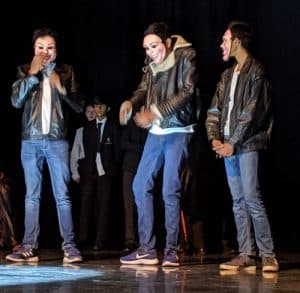 “He was ably balanced by the cruel exuberance of the young ‘Christians’ – Antonio, played by Sathujan Manmatharajah, and Bassanio, played by Maanav Patel, were both particularly convincing young hoodlums strutting around in their black leather jackets.” All three actors are in Year 13.

“George Raynor, of Year 12, caught Portia’s humanity as well as her steely intelligence, dealing calmly with a minor wig issue in the second half…”

He highlighted “notable performances” by Paul Ofordu and Ethan Solanki (both of Year 11) as “the arrogant losers – the dancing princes of Morocco and Arragon respectively.

“The whole cast of 23 were praised by the organisers for their team-work, their physical focus and the clarity with which they spoke and understood their lines,” said Mr Bonham-Carter. 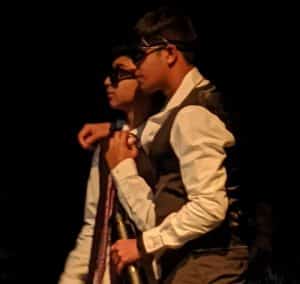 Before staging the performance, the whole QE cast took part in a workshop at the Arts Depot led by professional Shakespeare Schools Festival staff.

Mr Bonham-Carter, who took up his post at QE in September, added: “The best part of my role as head of pupil involvement is seeing our young men responding creatively under pressure. Whether being interrogated in a debate, lost on a Duke of Edinburgh hike, or performing Shakespeare in a live theatre, our boys are learning through ‘real’ experiences such as these that, with good preparation and a can-do attitude, they can do anything!”