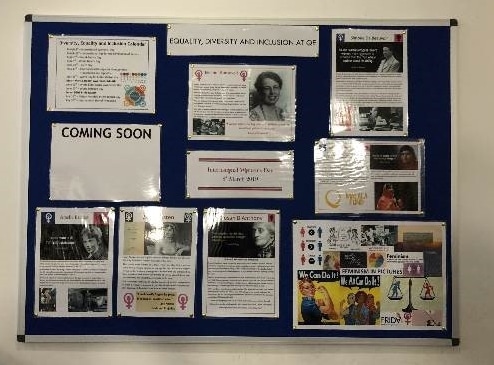 QE’s new Equality, Diversity and Inclusion Ambassadors have been encouraging their fellow pupils to reflect on the need for a more gender-balanced world on International Women’s Day 2019.

Year 12 pupils Leo Kucera, Vithusan Kuganathan and Josh Osman have been appointed to the new positions within the prefect body.

They are working to further understanding and celebrate diversity, both within the context of the School and in broader society. The trio started their work in style by putting together a colourful and informative display on the School’s prominent new equality, diversity and inclusion noticeboard for International Women’s Day, which has as its theme #BalanceforBetter – the forging of a more gender-balanced world.

Headmaster Neil Enright said: “I am delighted that we now have increased peer leadership in these areas. Since we are a single-sex boys’ School, it is important that we ensure pupils have an awareness of gender issues and reflect on the challenges faced by women in our society and in different parts of the world, while also celebrating women’s achievements.

“Leo, Vithusan and Josh have done well to seize the opportunity presented by International Women’s Day to further these aims.”

The appointment of the new ambassadors is only one of a number of developments at the School in this area.

A new Diversity Society has started meeting on Mondays, run by Year 13 pupils Aashish Khimasia (last year’s School Captain), as well as Jonathan Ho, Yushin Lee and Omar Taymani. In their promotional material, they state that the society meetings will be an opportunity to look at ‘Mental health, sexuality, gender equality, identity politics, animal rights and whatever more you want to discuss’.

An Equality, Diversity and Inclusion calendar has also been created at the School to highlight relevant key events throughout the year, and the new noticeboard will be used to celebrate these, while also highlighting case studies of influential, successful and inspiring women.

In recent months, a number of guest speakers have addressed issues of equality, diversity and inclusion, such as:

In addition, the School seeks to address such issues both through the weekly Personal Development Time provided as part of the School’s pastoral support and through the academic curriculum.