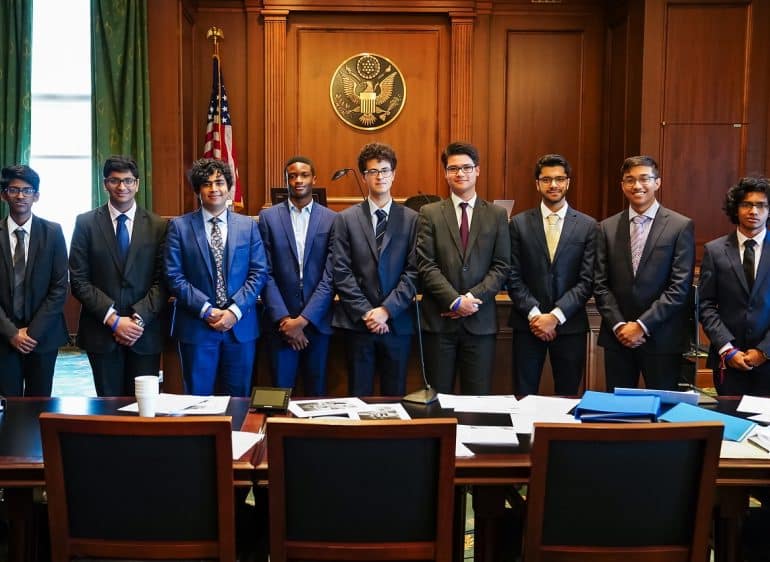 Judges in the prestigious Empire Mock Trial competition held in New York praised a nine-strong QE team for their performance in courtroom battles against leading American and Chinese schools. 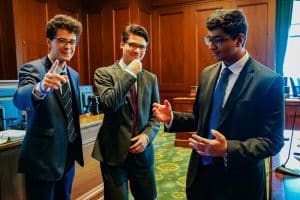 Despite having to grapple with a legal system that can be very different from the English system, the Sixth Form team competed strongly, gaining both votes and plaudits from the adjudicators, reports their coach, Jack Robertson, Head of Philosophy, Religion and Society.

One of the team, Dharrshan Viramuthu, of Year 12, reflected afterwards on a “fantastic, unforgettable experience. Dharrshan said: “Visiting a city like New York was amazing, as was the opportunity to compete against the best Mock Trial teams in the US and across the world.”

Saifullah Shah, of Year 13, added: “Beyond its academic rigour, the entire Empire experience was unforgettable, largely due to the remarkable kindness of our fellow competitors. Numerous friendships were made both amongst our own team as well as with our opponents.” 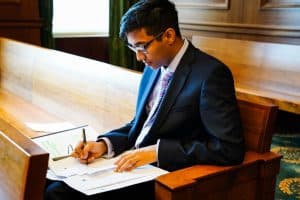 “The Empire Mock Trial follows the US legal system, so students had to learn a lot about how it works,” he said. “They had to familiarise themselves with, and then be able to apply, a range of case law, as well as adapt to various procedural aspects of being in a US court room. In particular, adapting to the use of objections was a challenge, but one the team rose to well.”

Their appearance in the competition centred on a fictional legal case between the Tam family and a company, Castle Construction. The construction company owned a luxury apartment block on the fictional island of Empirion. The block had some affordable housing units, one of which was occupied by the Tam family. Evelyn Tam, who was one of the occupants, became pregnant. Her child, Timothy Tam, developed dilated cardio-myopathy in vitro, and was given five years to live. It was then discovered that a chemical trichloroethane was present at the apartment block and that this could potentially cause heart defects. The Tam family subsequently brought a civil suit against Castle Construction, accusing the company of negligence.

Although the QE boys were not among the overall winners, the trip was a great success, said Mr Robertson.

“Judges and observers were impressed with the professional manner in which they conducted themselves, the persuasive force and clarity of their speeches, and the incisive manner of their examinations. They won the ballots of several judges in some hard-fought contests against schools from the US and China.”

In addition to taking part in the competition, the boys had the opportunity to: