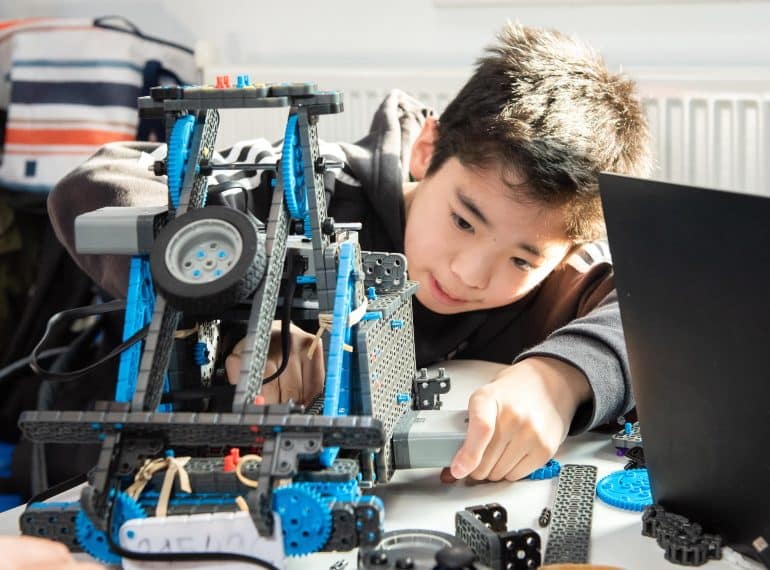 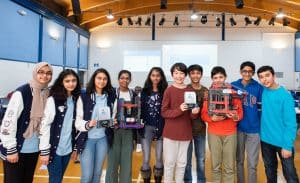 One QE team took joint first place with a team from The Henrietta Barnett School in the regional tournament’s teamwork finals – and thus secured early qualification for the national finals – while another two were joint second out of the 28 teams from eight north London schools taking part.

QE’s Head of Technology, Michael Noonan, said the event had been acclaimed by visitors as a “roaring success”, with the “action-packed finale of the teamwork competition proving to be the cherry on top”. One distinguished visitor on the day – Stephen Sadler, VEX mentor at East Barnet School and a VEX World Hall of fame member – had his own word of encouragement for the QE organisers: “Great show and the place was buzzing – well done!”

For the past t 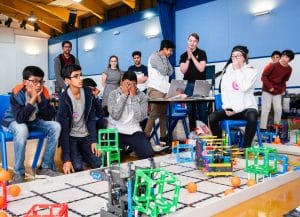 wo years, QE teams have not only achieved national success, but have also progressed to the world VEX IQ finals in the US.

Mr Noonan said: “The teams of Queen Elizabeth’s competed well in this regional round and can hopefully take what they have learned from this competition to further their claims to national qualification and regional success.”

The QE-hosted tournament involved a full day of robotics challenges, beginning with set-up and team inspections, followed by the two-hour skills competition. 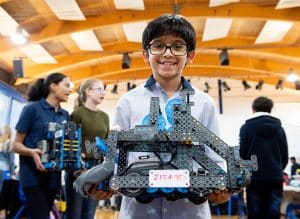 After that, it was time for the teamwork competition, in which two teams are required to work together, often, but not always, with teams from other schools. Teamwork qualification matches took place either side of lunch. The final hour was devoted to the teamwork finals and the announcement of the day’s awards.

“The real drama of the day came in the teamwork finals,” said Mr Noonan. With many of the teams, including QE’s Silicon Vortex, Cyber Storm and Hypercharg, performing at a high standard, there was a danger of deadlock developing, he said.

However, a combined team from Greig City Academy and The Henrietta Barnett School broke through “scoring an excellent 108 – at the time equalling the national teamwork high score”. 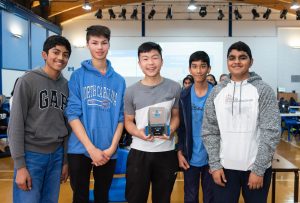 “This gave the all-QE combination of Gyrofusion and Gearsquad (already ranked as the second overall alliance) the tall task of breaking the national record in order to advance as the overall first ranked alliance. High drama followed, as a packed crowd of over 200 seated in the ‘bleachers’ voiced healthy support for the home finalist. As the robots came to rest, it was clear that a new high score may have been achieved – and a huge roar erupted from the stand. Judges, referees and volunteers checked scores carefully, and when the new UK record of 111 flashed up on the screen, the home crowd was delirious!

“However, the drama was not yet over, because the overall first-ranked alliance of QE’s Hyperdrive and HBS’s Rampage (also the current number 1-ranked team in the UK in the skills category) had to have their say. After some early setbacks in the match, some highly skilled driving from the respective ‘closing’ drivers saw a flurry of late activity, and it looked as though a strong final score was in the offing. One could hear a pin drop as audience members tried to work out if this had eclipsed the mighty 111 national record set just before – and so it proved, as Que 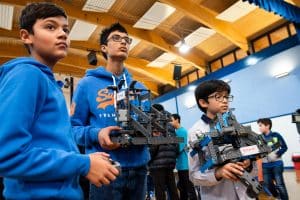 en Elizabeth’s and HBS had combined to equal the national record and thus tie the overall competition!

“What followed was a spectacle so rare that it was not seen for the entirety of last season at IQ – a teamwork tiebreaker to decide the champion! The idea behind the tiebreaker is to set the same score, but to do it faster, as time left over can often be the deciding factor in determining the overall champion.

“First up went the all-QE team. In the rush to set a faster high score, QE’s double act were cruelly denied by a falling game element, losing them 20 points and leaving their final score at 96.” 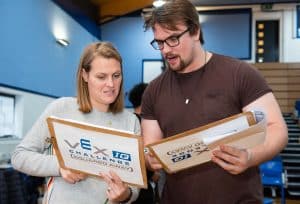 “This made their tiebreaker opponents’ task a simple procession to victory: accordingly, they played it safe and simply did what was required to score 100 points, and in doing so won the tie-breaker and the overall tournament.”

“Our tournament champions, Hyperdrive, were ecstatic in victory, but also aware that this was not the end of the road for them: they know that more improvement is required to achieve highly on a national scale.

“There was some consolation for Gearsquad after their defeat in the tiebreak, since they came away with the Design award for their meticulous design notebook and attention to detail in the engineering process. 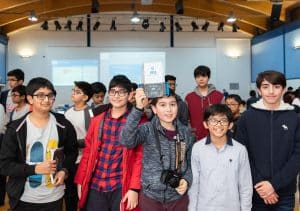 “Another award winner on the day was the newly-formed Year 8 team of Cyber Storm, for the innovative way they programmed their robot.

“Great applause rang out to encourage them, with the audience knowing that winning this award at such a young age when the competition was so tough was no mean feat,” Mr Noonan concluded.

The tournament awards went to the following teams (with their schools listed in brackets):

The QE teams were: