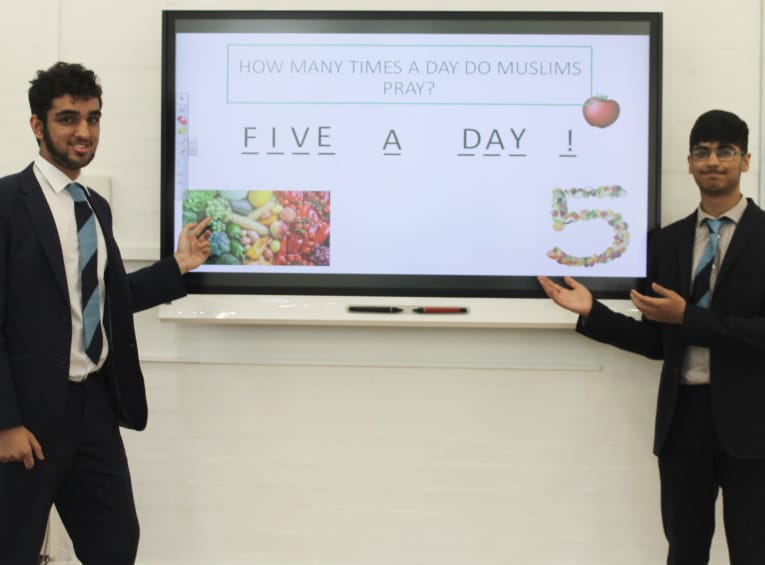 QE pupils drew praise from faith experts and educationalists alike when they spoke at the launch of Barnet’s new Agreed Syllabus for Religious Education and in presentations to local primary schools.

Sena Lai-Fujiwara and Vignesh Rajiv, of Year 9, and Saifullah Shah, of Year 13, who are all members of the long-running Faith Ambassadors project at QE, gave presentations on their faiths at the meeting of Barnet SACRE (Standing Advisory Council for Religious Education) at Hendon Town Hall.

QE boys also spoke to primary school pupils as part of the project, which has now been running at the School for some years. It involves pupils of different faiths working together to produce a short presentation on some aspect of their faith, which they then deliver in primary schools as part of QE’s community outreach work.

After the presentations at the SACRE meeting, the Mayor of Barnet, Councillor Caroline Stock, was keen to discuss the project with the trio and to congratulate them on their work, while a letter sent subsequently to Headmaster Neil Enright brought fresh messages of congratulation.

The joint letter from Dr Anna Sallnow, a Religious Education consultant representing the local authority, and Kevin McSharry, Chair of Barnet SACRE, said: “It was quite a daunting task to speak in front of such a distinguished audience. However, your students rose to the challenge magnificently. They spoke with clarity, enthusiasm and understanding… [and] listened respectfully while other participants spoke. They all showed how much they enjoy their RE lessons and the importance of being religiously literate in our ever-changing world.”

QE’s Head of Philosophy, Religion and Society, Jack Robertson, said: “The Faith Ambassadors project gives our boys an opportunity to share with others details of their faith which they are passionate about, while at the same time working on their presentation skills. Primary pupils then get to hear about a particular religion from a QE student’s personal perspective, which can greatly enrich their understanding of a religion.

“Barnet is one of the most religiously diverse boroughs in England, and the make-up of QE’s Faith Ambassadors reflects this diversity: this year, Christian, Hindu, Jewish, Muslim and Sikh pupils all participated in the project, visiting schools in Barnet and Finchley.

Faith Ambassadors Saifullah Shah and Ben Domb (Year 13) spoke afterwards about their experiences, with Saifullah stating that it had been “a golden opportunity that enabled us to inspire others” and Ben saying it had been “a rewarding process [that] allowed me to explore my religion in a way that I hadn’t thought about before”.