Rising to the challenge: imagining a better future against the clock

Academic enrichment > News & Events > News > Rising to the challenge: imagining a better future against the clock 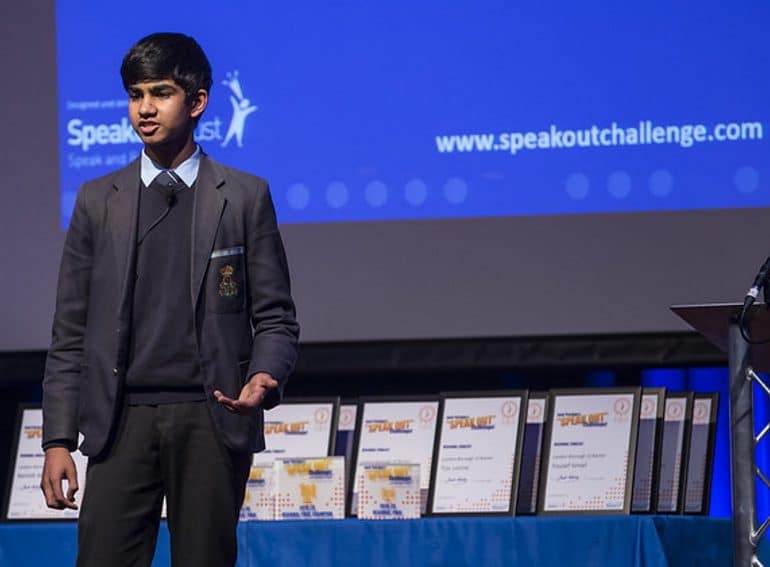 From Harry Potter and major religions to global technology companies, QE pupil Yash Makwana covered them all in a speech – and in less than three minutes, too! 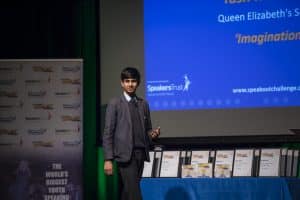 Selected from a strong field of Year 10 peers, Yash represented the School at the regional final of Jack Petchey’s Speak Out Challenge – the world’s largest speaking competition for young people.

The brief was to deliver a speech of between 90 seconds and three minutes on a topic of his choice – the only stipulations were that it had to be something he was passionate about and it had to contain a positive message.

Yash chose ‘Imagination’ and how it can be used to advantage to create a more positive future. He said: “Whilst the School does encourage the use of imagination, there is a danger it can be limited by mark schemes and exam assessments.”

Working at QE towards his Higher Project Qualification – a stand-alone qualification involving individual study of a particular topic – had helped him obviate this risk, he said. “It has given me the freedom to research systems of government and why they work or don’t work. In particular, I have been able to imagine a ‘perfect’ government and understand to what extent it could be implemented and what its limitations might be in practice.”

Yash had not been involved in public-speaking before this competition and chose to deliver his talk without notes, retaining some talking points in his mind, so that his delivery would flow. 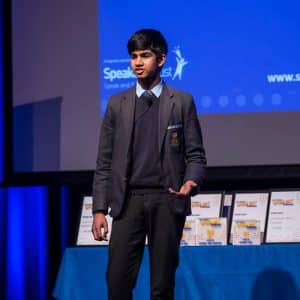 Oliver Gorman, an Extra-curricular Enrichment Tutor at QE, said: “Although he didn’t win, Yash certainly deserves plaudits for his speech and the confidence he showed in performing in front of a large crowd. He spoke brilliantly and represented himself and the School fantastically.”

Yash added: “I really enjoyed the competition. Some of the speeches were quite eye-opening.”

He touched on the importance of imagination in a number of realms including the impact fiction had on his childhood, particularly the Harry Potter series, and the benefits of escapism. He talked about the importance of imagination in the innovations of tech entrepreneurs and at global giants such as Tesla, Microsoft and Google. He also talked about major world religions: “Imagination in interpreting and retelling the stories has helped make them as big as they are,” he suggested.

He posed a question to his audience: ‘What can you do with your imagination?’. He hoped that this ‘take-away’ would encourage people to look at things in a new light, to see how fundamental imagination is in all their lives. 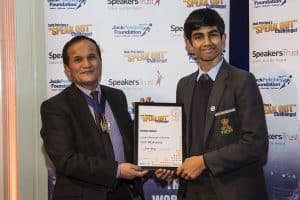 “The experience has really boosted my confidence in public-speaking, and I hope to do more of it in the future,” he said.

The event was organised by The Speakers’ Trust, sponsored by The Jack Petchey Foundation. The Foundation itself was set up by London entrepreneur Sir Jack Petchey specifically to inspire and motivate young people and give them a voice. Councillor Lachhya Gurung, Deputy Mayor of the London Borough of Barnet (pictured) was among those who attended.