Shining examples! Competition winners focus on three women who inspired others in times of trouble 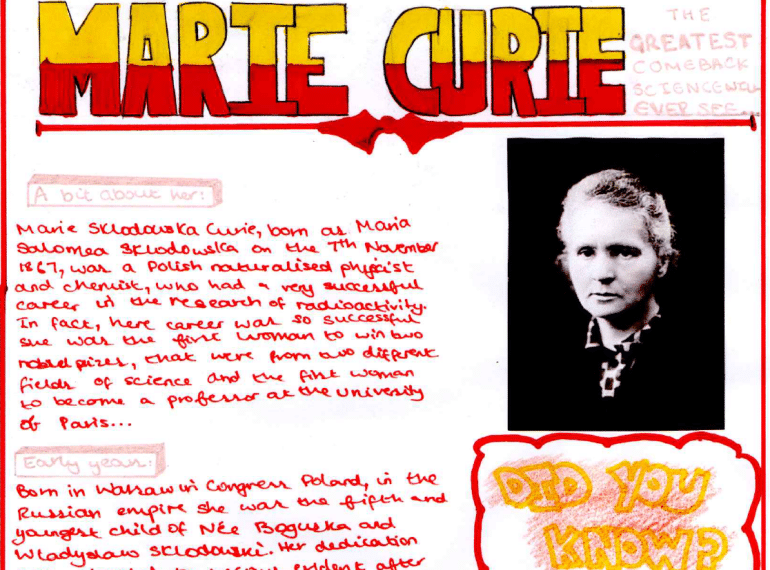 A QE competition inviting boys in lockdown to write essays or design posters about figures who helped others through previous times of adversity drew entries featuring a huge variety of inspirational men and women.

From Winston Churchill to Colonel Sanders (of KFC fame), and from civil rights activist Rosa Parks to the Prophet Muhammad, boys from the first three years at the School spanned the centuries and ranged across the world with their chosen topics.

And the subjects of the three winning entries – who were all women – equally had very different stories, with one being a world-famous scientist, one an Irish-born teacher who became an influential spokesperson promoting Indian national consciousness, and the third the heroine of an aeroplane hijacking.

The competition for Years 7-9 was run and judged by the School’s four Equality, Diversity and Inclusion Ambassadors, Sharvash Jeyaharan, Beker Shah, Vebushan Sukumar and Ukendar Vadivel, all of Year 12.

“We were amazed by the number of high-quality responses from all years,” they said in a joint statement as the results were announced.

In launching the competition, which they entitled TALK, the ambassador team had stated: “The past few weeks have been filled with uncertainty, disappointment and complete confusion. It can be hard to find courage and resilience in this time, but humanity has always bounced back.” They invited boys to write an essay of no more than 1,000 words or design an A4 poster featuring “someone from history that has shown strength and determination in hard times, who inspires you today”.

Year 7 winner Trishan Chanda wrote about Margaret Elizabeth Noble, who was born in Dungannon but became a follower of the Indian spiritual leader, Vivekananda. She devoted her life to service in India, where she ran a school, helped the poor during times of natural disaster and became involved in working towards India’s political emancipation. Her health broken by her efforts, she died aged only 43 in 1911.  The ambassadors praised Trishan for “writing a compelling piece about someone not well-known”.

By contrast, Year 8 winner Chanul Athukoralage’s subject was one of the world’s best-known scientists, Marie Curie, who was the first woman ever to win a Nobel Prize and who remains the only person to have won a Nobel Prize in two different scientific fields – Physics and Chemistry.

The judge’s praised Chanul’s “eye-catching” poster and described the Polish (and naturalised-French) pioneer of research into radioactivity, who died in 1934, as “an inspiration to the aspiring scientists of today”. In what Chanul described as the “greatest comeback science will ever see”, she overcame the devastating death of her scientist husband Pierre Curie in an accident in 1906 and went on to take the University of Paris chair that had been created for her husband and to win her second Nobel Prize.

Dhruv Chadha, the winning entrant from Year 9, related the story of Pan Am head purser, Neerja Bhanot, from India, who was shot and killed while saving passengers on her hijacked flight during a stopover in Karachi, Pakistan, in 1986. Earlier in the flight, she had hidden the passports of passengers on the flight so that the hijackers could not identify American passengers, whom they were targeting. When, after 17 hours, the hijackers opened fire and set off explosives, she opened one of the aircraft’s doors and started helping passengers escape, but was shot at point-blank range. “The story of her selflessness and humanity is moving – sacrificing her life for the 384 passengers of a hijacked plane,” the judges said.

The winners are being congratulated by their Heads of Year in their virtual assemblies. You can see their entries here: Trishan Chanda, 7U, Chanul Athukoralage, 8S and Dhruv Chadha, 9L.