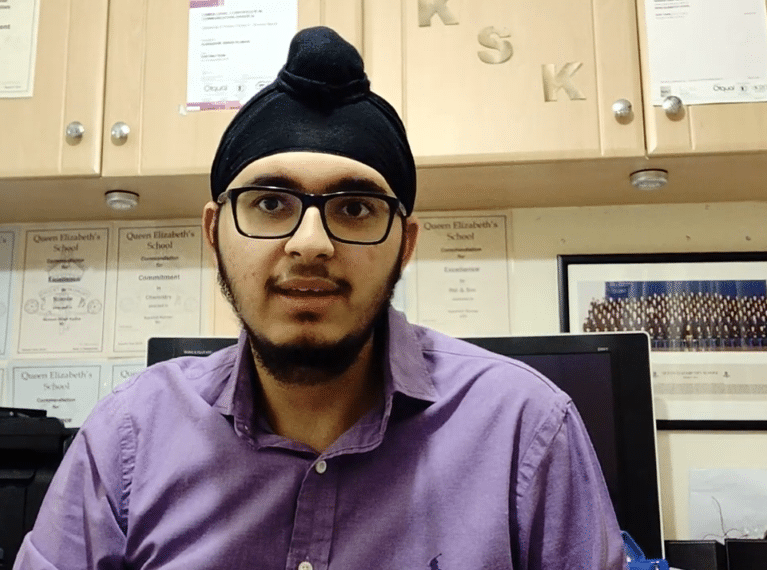 Year 12’s Karanvir Singh Kumar has been named as one of three runners-up in a national schools competition run by economists seeking to challenge conventional thinking in the discipline.

His three-minute film won plaudits from judges for its ideas, its coherence and its clarity.

QE’s Head of Economics Shamendra Uduwawala said: “My congratulations go to Karanvir for his achievement. He formulated an effective argument and then delivered it to camera with considerable aplomb.”

The competition was entitled What’s the 8th Way to Think Like a 21st Century Economist? and was run jointly by Doughnut Economics and Rethinking Economics.

Doughnut Economics is the organisation and website run by Kate Raworth, of Oxford University’s Environmental Change Institute, whose 2017 book, Doughnut Economics: Seven Ways to Think Like a 21st-Century Economist has been translated into 15 languages. She has presented her ideas to the UN General Assembly and has been described by environmental activist and Guardian columnist George Monbiot as “the John Maynard Keynes of the 21st century”.

Rethinking Economics is an international network of students, academics and professionals working towards “building a better economics in society and the classroom”.

In his video, Karanvir began by arguing that the very etymology of the word ‘Economics’ – it derives from the Greek word ‘οἰκονόμος’, meaning ‘household management’ – provides a good starting point for addressing the topic. “The way consumers manage their households is the main influence over what is demanded from the economy and what they consume,” he said.

“Traditionally it’s argued that ‘change demands, and supply will follow’.” But, said Karanvir: “I believe both aspects need to change in tandem to achieve any equilibrium goal. I believe that in  the 21st century we should finally re-centre Economics around the household, and not just by analysing consumer habits, but by aiming to change the deep, underlying human needs behind those habits to more sustainable ones.

One of the judges, Naila Kabeer, Professor of Gender & Development at London School of Economics, praised his entry: “The different parts of the argument fitted together well. I liked: the focus on the household as a way of thinking about consumers; the need for innovation to make sustainable living easy; and ‘mindfulness in demand and sustainability in supply’. Congratulations!”

Fellow judge Nancy Folbre, Professor Emerita of Economics at the University of Massachusetts at Amherst added: “Good substance with a clear presentation!”