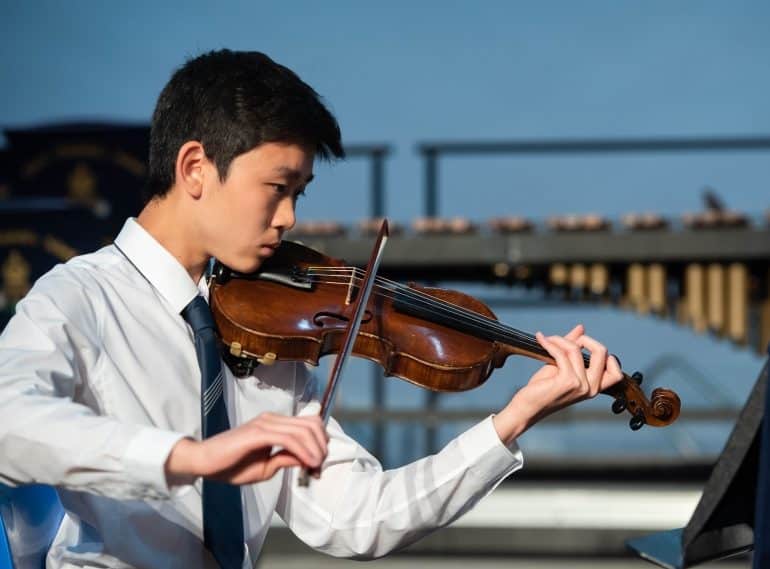 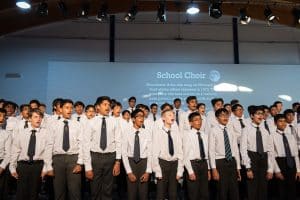 In a very varied programme that ranged across the genres from traditional Indian classical and western classical to jazz and pop, the boys explored mankind’s enduring fascination with the moon, featuring a number of space-related pieces.

These included the Beethoven composition widely known as the Moonlight Sonata, performed by Year 8 pianist John Zhen, and the popular early 20th-century song, By the Light of the Silvery Moon, played by the Sinfonietta, as well as the Summer Strings’ performance of Barber’s Adagio for Strings, which was played at President Kennedy’s funeral in 1963, six years before his moon-landing vision was fulfilled. 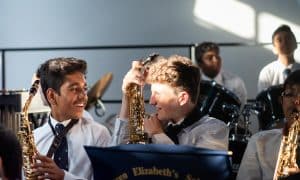 In a speech, Headmaster Neil Enright alluded to astronaut Neil Armstrong’s famous comment on setting foot on the lunar surface that it was “one small step for a man, one giant leap for mankind”.

“This ‘one small step for a man’,” he told the audience of parents and other guests, “was, in fact, the last of a very long series of small steps, taken over a period of time, to make that last one possible. And the small steps forwards you take with something now can all add up to a giant leap in the future, or at least lay the foundations for future progress and 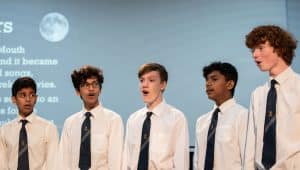 Acting Director of Music Jennifer Brown said: “We had more than 200 boys taking part – an impressive number considering that it was exam season, so all of Years 11 and 13, and almost all of Year 12, were unavailable.

“Our singers were on excellent form, performing all their pieces by heart, including the 95-strong School Choir – very ably accompanied on the piano by Shivas Patel, from Year 10. Among the high points were the B Minors’ barbershop group’s singing of Don McLean’s Vincent and Smash Mouth’s All Star.“ 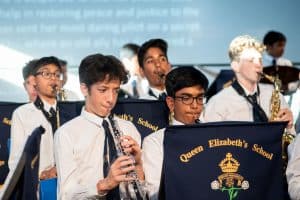 s Brown also highlighted other aspects of the concert in the Shearly Hall including the collaboration between two different ensembles, the Sinfonietta and Flute Ensemble to perform Moon River, “very professionally directed” by Music teacher Hannah Morgan.

“The Concert Band includes some of our least experienced musicians, and they did really well to perform some challenging repertoire from Star Wars,” Mrs Brown added.

Year 10’s Raphael Herberg was “an absolute star! He directed the Celli beautifully and arranged the music, Dvorak’s New World Symphony, too.” 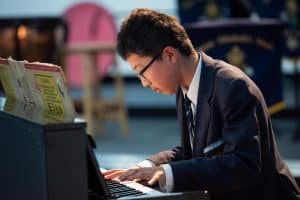 “String Quartet is another example of an ensemble brilliantly led by pupils themselves. Whilst the Shostakovich [String Quartet No. 8] did not link to our space theme, it was great for the boys to have the opportunity to perform it to a large audience in preparation for the prestigious South East Schools’ Chamber Music Competition they will be entering in the Autumn Term.

The Telugu lyrics of the piece performed by the Junior Indian Ensemble implore Lord Krishna, “Please come my lord Venugopala”. The popular composition, using the carnatic raga Bilahari, is one of the early compositions that children learn when they start carnatic music lessons.

There was even a surprise performance by one ensemble, Friday Jazz, who were not listed in the printed programme. “We didn’t think that they would manage to get here as so many of their group had been away on trips, but they made it and performed Fly Me to the Moon.”