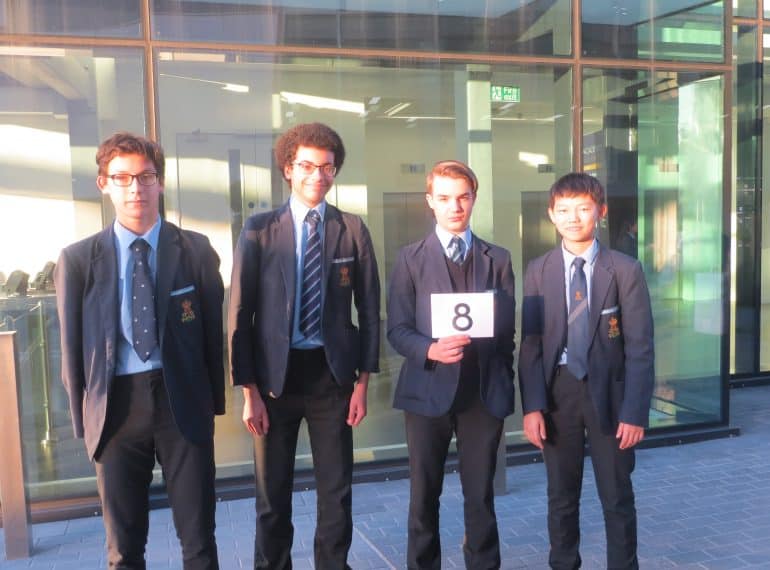 Four Year 10 boys shone in this year’s Maths Feast competition, rising to the challenge of tough questions that even included topics from the A-Level Further Mathematics syllabus.

They won two of the four rounds at the London Academy of Excellence in Tottenham, taking the maximum possible points total in the Dessert round, as well as winning the Starter round. At the end of the event, they had netted 109 points out of an overall possible total of 121, placing them first out of the 15 schools taking part, with the QE boys playing as team no. 8.

The team, who were selected by the School, comprised Andy Kwak, Alexandre Lee, Sheikh Mohiddin, and Dan Suciu.

Congratulating them, Mathematics teacher Kirtan Shah said: “This was a truly commendable achievement. All four students worked well together as a team, strategising and using each other’s strengths to their advantage.”

The competition, which is held at locations across the country, is run by the Advanced Mathematics Support Programme (AMSP) – a Government-funded initiative – and is billed as a “fun educational challenge for Year 10 students which tests problem-solving and teamwork skills”.

Each Maths Feast event is a one-off, with no further heats or finals, so participants and their accompanying teachers can take materials back with them to their schools.

This year’s challenge involved teams working on a variety of problems, ranging from a Merry Go round requiring a large amount of independent work to a relay that involved working in pairs. The A-Level Further Mathematics content came as the ‘surprise’ element of the competition; it was based around networks and algorithms.

Afterwards, team member Andy said: “I found the whole event a way for me to improve my problem-solving skills, especially in the individual round, where we had to work by ourselves and had no one else to depend on.”