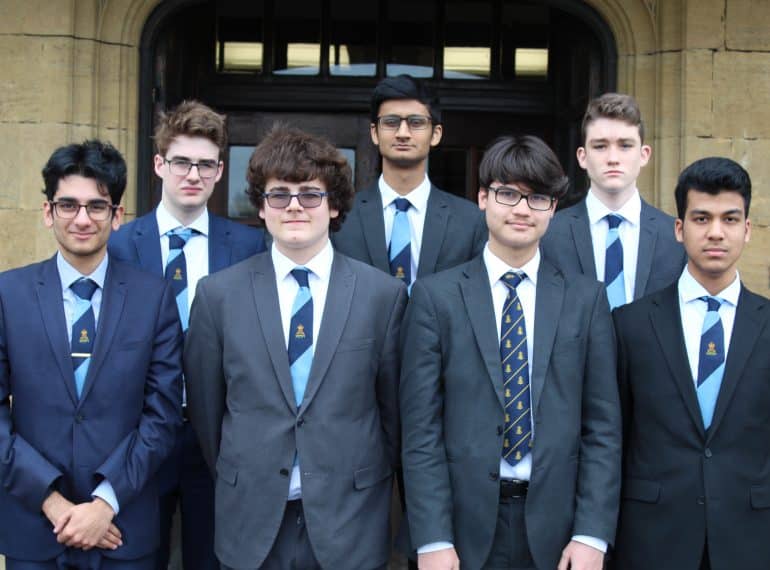 Teamwork, talent and exemplary preparation all played their part in the success of QE’s eight-strong team in the South East Regional Session of the European Youth Parliament.

The Year 12 boys now progress to this summer’s national round of the debating competition for the third consecutive year.

Guiding them to their success at the regional forum hosted by Haberdashers’ Aske’s School for Girls was Academic Enrichment Tutor Helen Davies. “The team put in a fantastic performance head-and-shoulders above their rivals, being described as ‘too keen and too good’ by the chair of the session!” she said.

“Their success was down to solid preparation before the event and also excellent teamwork and the participation of all eight members, who all spoke many times during the session.”

“In addition to defending the resolution which we had been allocated in advance (for SEDE – the Committee on Security and Defence), the boys’ performance also won them the right to make key ‘attack speeches’ on other resolutions over the course of the day.”

The SEDE resolution stated: “Given the discovery of Russian influence on campaigns orchestrated via social media, and the upcoming European elections in 2019, what steps can the EU take to make sure its citizens are correctly informed and to ensure the security of the election?”

In his opening defence speech, Saifullah Shah said: “Russia is seeking to undermine the very fabric of our society by spreading disinformation.” And in his closing defence speech, Chris Hall stated that the ability of disabled and otherwise immobilised people to vote would be greatly enhanced by online voting.

Among the speakers on other resolutions, Ryan Ratnam, at the Committee on Human Rights, addressed the issue of the age at which the Holocaust should be taught in the National Curriculum. Alex Beard gave a summation in a closing speech for the same committee, attacking the complete lack of coverage of anti-Semitism in the resolution, opining that it was therefore not fit for the 21st century. Referring back to an analogy employed by the proposing committee in their opening speech, and contradicting the view taken by them, he said: “This motion is akin to a tricycle – it is childish and naïve. Unfortunately, during the course of this debate, we can see that the wheels of the proverbial tricycle have fallen off.”

The day ended with a highly entertaining ‘French debate’ in which students debated a final motion in a language of their choice, said Miss Davies: Alex Beard contributed in both French and German.

“The boys displayed good teamwork and in-depth knowledge on each of the resolutions debated during the day – the product of their general excellent political knowledge and their prior research,” she said. “The event displayed well the excellent tradition of public speaking and debating which is upheld at QE, as all eight boys spoke extremely well, which set us apart from the other schools.

“It was very nice to see the legacy of QE success within the EYP organisation: one of the key organisers for this event was Aditya Ravindrakumar, of Year 13, who was part of the QE team which qualified for the EYP National Session in 2018.”

Also going through to the nationals are the City of London School for Girls.