Toe-tapping numbers at the Jazz Evening 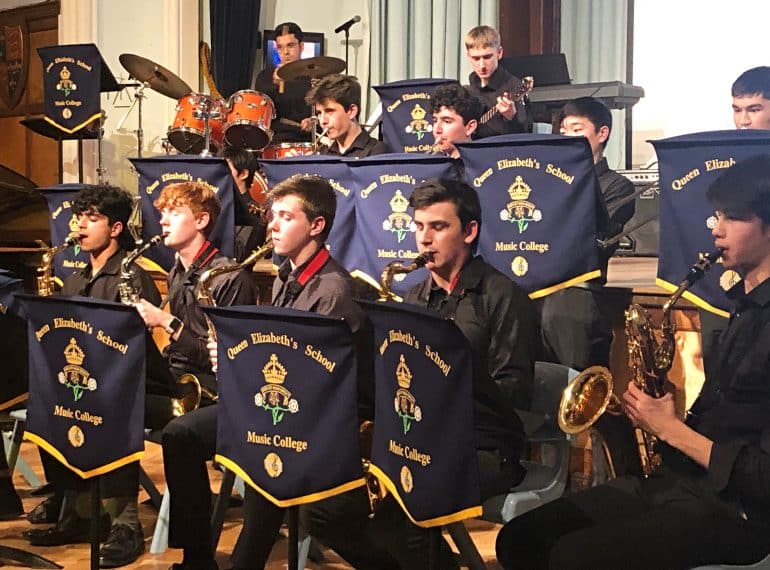 A capacity audience at QE’s Jazz Evening enjoyed debut performances alongside accomplished playing by some of the School’s more seasoned musicians.

There were ensemble and solo performances of works from classics and standards to new jazz-influenced compositions, as well as fusions of jazz with other styles.

Boys from Years 7– 13 enjoyed the opportunity to showcase their flair for everything jazz in the Main School Hall. 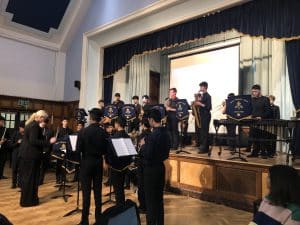 Director of Music Ruth Partington said: “The audience enjoyed a fabulous concert – a truly toe-tapping evening. The boys practised and rehearsed hard in the weeks running up to the concert and did not disappoint on the night, giving enjoyable and memorable performances.”

Symphonic Winds, performing for the first time in this annual concert, opened the programme with A Little Salsa Music by Adam Gorb and Jitterbug! by Robert Buckley. And Year 7’s Leo Sellis performed his first saxophone solo since joining the School in September last year, playing Sonata, Movement II by Phil Woods.

The QE Jazz Band played a number of sets, delivering, amongst others, the Theme from Hawaii Five-O by Mort Stevens and Cool from West Side Story by Leonard Bernstein. “The Jazz Band proved themselves, once again, to be the backbone of the evening,” said Miss Partington. “The audience were continually impressed by their tight but exuberant playing. There were some excellent solos from all the instruments, with a special mention going to Conor Parker-Delves on tenor.”

The Jazz Lounge performed their own arrangement of George Michael’s Careless Whisper, while Friday Jazz took on jazz classic Birdland by Joe Zawinul.

“The audience enjoyed a real treat with the performances from Friday Jazz and the various Saxophone Ensembles, and were suitably impressed by the quality of the student-led groups, such as the Barbershop Group and QE Jazz Lounge. All the boys are to be congratulated for their enthusiasm and accomplished performances.” Miss Partington concluded.