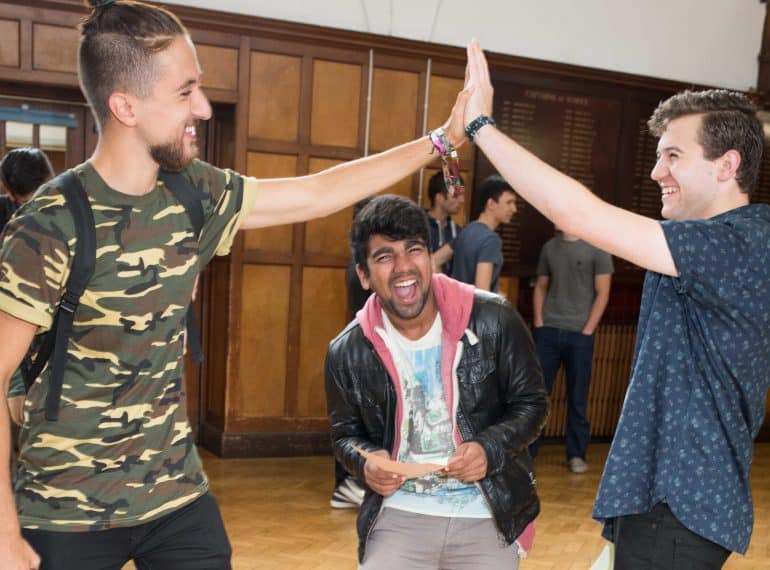 Boys at Queen Elizabeth’s School once again performed very strongly at A-level, with the proportion of  A*-B grades awarded reaching 96%.

There were only a handful of C grades among the 471 A-levels taken this year and no pupil received any grade lower than a C. Almost all the Year 13 leavers will go on to take up places at leading universities.

The results further cement QE’s reputation established over the past 20 years as one of the best-performing academic schools in the country, whether in the state or independent sector.

Headmaster Neil Enright said: “I congratulate our boys on another excellent performance – 96% at A*-B grades is an impressive achievement by any standards. Among this year’s leavers, a near-record 37 boys have received offers of places at Oxford or Cambridge.

“I am particularly pleased at how consistent our A-level results are at a time when, as many national commentators have pointed out, there is considerable turbulence in the area of public examinations. I should add that 96% represents the position before any re-marks are requested: these typically result in a net increase in the total figure.”

Ofqual, the examinations watchdog, recently told pupils nationally to expect ‘particularly volatile’ A-level and GCSE results. The major change for A-level candidates this year is that the qualification is now linear; for the first time, there were no modules in January.

The Russell Group of leading universities has stated recently that too many state school pupils are not encouraged to take A-levels in ‘facilitating subjects’ – traditional academic subjects such as sciences and languages. Such subjects improve pupils’ entry chances to top universities.

“It is important to note that QE boys predominantly take facilitating subjects at A-level, rather than other subjects seen by some as softer options,” Mr Enright added.

There has also been concern that it is becoming harder for pupils from state schools to gain access to leading universities. A recent commission set up by the Sutton Trust, an education charity, to examine the impact of higher fees reported that young people from wealthy backgrounds are around 10 times more likely to get into such universities than those from poorer homes, with boys from disadvantaged backgrounds especially unlikely to obtain a university place.

“At QE we are very proud that we operate entirely as a meritocracy and thus contribute to social mobility,” said Mr Enright. “Our students come from very diverse social and ethnic backgrounds, but they have this in common: they know that they can go as far in their studies here as their abilities will take them.

“Furthermore, Queen Elizabeth’s School is no ‘exam factory’: our teachers and support staff all work to inspire a love of learning in the boys, rather than merely training them to pass examinations. Our academic success is due to the deep-seated interest in their studies that many boys evince and, of course, to a great deal of hard work and application on their part.

“We strongly encourage all our boys to broaden their horizons by engaging in School activities outside the classroom: indeed, many of our highest achievers are also heavily involved in sport, the performing arts or in other QE clubs and societies.”

The total of 37 Oxbridge offers represents a 28% rise on last year. The offers cover subjects ranging from Architecture to Philosophy and include Medicine, Law, Mathematics, PPE and Engineering.

The A-level results are in line with the School’s expectations based on this cohort’s AS results last year.

Mr Enright said: “I was also very encouraged to note that our AS-level results for our Lower Sixth are significantly up on last year. In fact, the 95.2% figure for A-B grades equals our best-ever AS results, in 2011.”

Abolition of AS-levels is among a number of further reforms planned by the Government, but opposed by Labour. Cambridge University, supported by Oxford, has emphasised the importance of AS results in helping it to reach the right decisions in offering places to Sixth-Formers.

“In my view, AS-levels are very useful in guiding our boys and their teachers, helping them to make wise choices in their university applications,” Mr Enright stated.