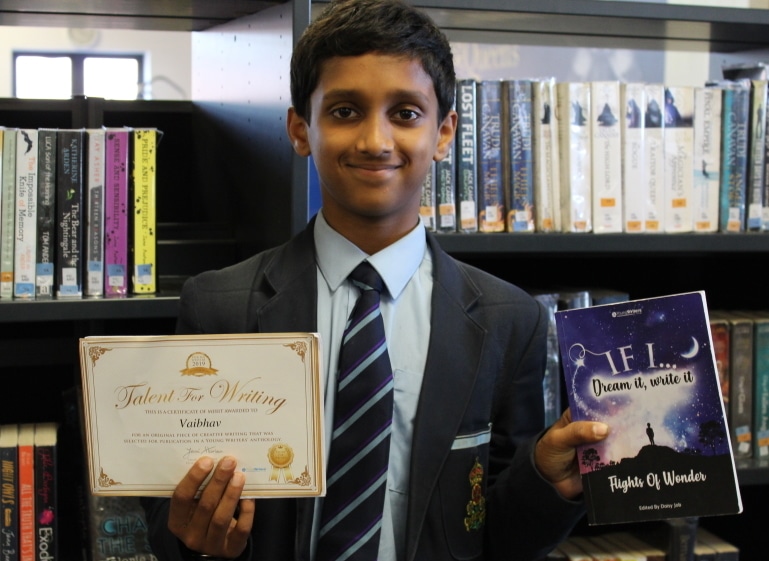 Year 8 pupil Vaibhav Gaddi is winning plaudits beyond QE with his creative writing: he has won a certificate from national competition judges and has had a short story published in an anthology.

Having discovered the competitions run by the long-established Young Writers organisation, Vaibhav quickly got to work on an entry for a competition open to secondary school pupils that challenged entrants to explore the aftermath of a global catastrophe in just 100 words.

Although competing against pupils much older than him, Vaibhav won the admiration of the judges with a short piece about biological warfare gone wrong that ended in pessimistic tones with the line: “Homo sapiens, the species which outsmarted its own…”

In another competition piece, based on the stimulus of ‘If I…’, he wrote from the perspective of a puppet “held by the strings which hold my life”. He explores the puppet’s feelings of jealousy experienced as a new puppet is made by the puppeteer, “my creator and inevitable destroyer”.

Head of English Robbie Hyland said: “I congratulate Vaibhav on his success in being published and in being awarded a certificate of merit. Creative writing, which is now a very popular pursuit at QE, brings many benefits and, of course, it can also be great fun.”

Vaibhav’s short story, entitled If I Were A Puppet, won him  a page in the Young Writers’ If I…Flights of Wonder anthology. Again, he finishes in fateful fashion: “I want to be noticed. I want to be free. And my greatest wish of all – I want to be known. Then the scissors came. That was the last thoughts of the old puppet.”

Vaibhav has had an interest in writing from a very young age and searches for competitions to give him topics to write about.

There are, he says, many benefits to creative writing: “I can express my emotions. If I’m upset, I can forget about the day [through writing].”

By writing outside of School, he finds that his English studies at QE benefit – “Our last test included creative writing” – while his lessons with English teacher Yioda Menelaou are, in turn, helping him develop the writing he does in his own time for fun. “Mrs Menelaou introduced me to travel writing, which has added a new style to my writing arsenal,” he says.

Vaibhav would like to write novels in the future, although he does not yet have a firm idea in place for this. He is planning to join QE’s creative writing workshops, which are based in The Queen’s Library.

His other activities include playing the violin (he has achieved grade 4) and cricket; he was Vice-Captain of the Year 7 team last term.