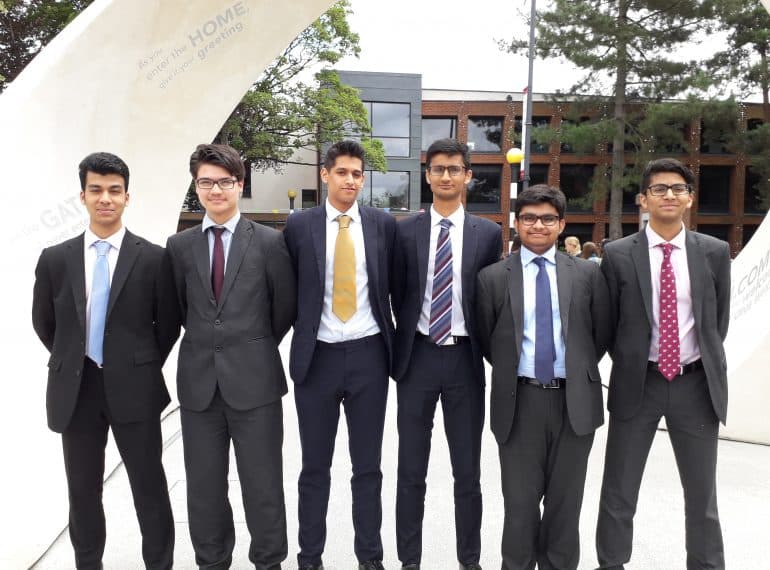 From starting a speech in Shakespearean-style verse to drawing in an audience with intense emotion, QE’s debaters expertly rang the rhetorical changes when they competed at the European Youth Parliament’s National Session. 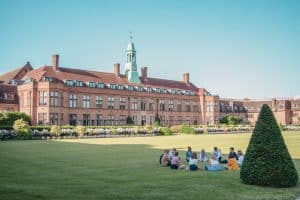 Having won their places with a barnstorming performance at the South East Regional Session – the third consecutive year in which QE has progressed – the Year 12 team were well-prepared for the four-day national event at Liverpool Hope University, for which the theme was Tomorrow’s Europe: Making every voice heard.

They worked in committees with pupils from other schools, rather than in their own team. After the first day’s team-building activities, there was a full day of committee work in which they collaborated to find a solution to a topical problem, presented as a written resolution. In the final two days, the resolutions were debated in the General Assembly, where the delegates gave three-minute ‘defence’, ‘attack’ and ‘summation’ speeches, but could also debate from the floor.

Academic Enrichment Tutor Helen Davies said: “All our students made well-researched and thoughtful points throughout the session that were relevant and brought new ideas to the forum – a very professional and efficient approach to the weekend’s activities.” 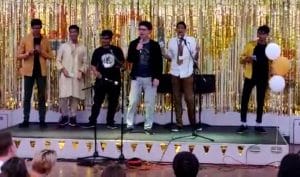 The team also broke new ground for QE, at least over recent years, by taking part in the session’s Saturday-night ‘Euroconcert’. “Introduced by the organisers as ‘the UK’s hottest new boy band, the whole team gave an enthusiastic and tuneful performance of the Backstreet Boys’ I want it that way. Frontman Saifullah Shah stole the show and really engaged the audience!”

Earlier that day, in the more sober setting of the General Session’s debate involving the Committee on Legal Affairs, Saifullah had had his hearers equally entranced. He made a closing (‘summation’) speech on a motion exploring how the EU could ‘ensure that the internet remains a place where marginalised communities and different ideas can continue to prosper, while keeping it a safe space for all’. And he began with a paraphrase of Hamlet’s ‘To be or not to be’ soliloquy: “Freedom of speech, or protection, that is the question: whether ’tis nobler by Law to suffer the slings and arrows of online harassment, or to take arms against a sea of hate speech and by opposing end it.” It was, said Miss Davies, “received very well by the audience”. 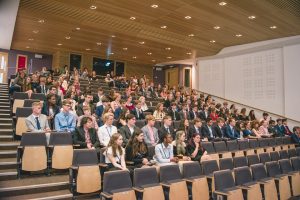 In the session devoted to the first of the two Committees on Employment and Social Affairs (‘EMPL1’), delegates debated the isolation of the elderly. Deeps Gandhi was among a committee that submitted a motion which, inter alia, urged EU member states to appoint a minister for loneliness and subsidise care for the elderly by providing means-tested financial aid to families.

In EMPL2’s session, which was debating the EU’s response to the poor employment standards suffered by textile workers internationally, Aryan Jain gave the opening defence address. “It was a compelling and emotional speech, which also showed deep understanding of the topic. Aryan urged the delegates to ‘uphold the moral fabric of the European Union’ by preventing the exploitation of foreign workers,” said Miss Davies.

Other highlights of the debates included clear, well-researched summaries of complex issues by Hanif Gofur, a well-presented and well-written speech from Mehul Shah, and arguments from Viraj Mehta supporting the use of an ‘app’ to increase popular engagement with politics (on a motion before the Committee on Internal Market and Consumer Protection exploring how the EU could make use of IT to further the inclusion of citizens in the decision-making process, given growing mistrust in EU institutions).

In addition to the Euroconcert, which had a theme of Glitter and gold, social activities included the opportunity to sample food from more than a dozen different countries and a ceilidh (Scottish folk dance), which the boys also enjoyed, Miss Davies reported.

Subsequently, Saifullah Shah and Mehul Shah learned that they had been individually selected for the International Round of the European Youth Parliament, which takes place later in the year, following their excellent performance.