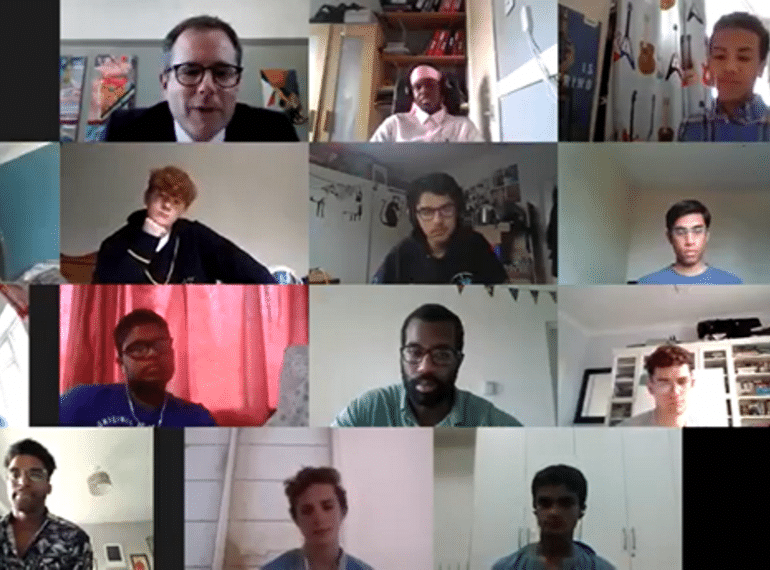 Perspective, QE’s new pupil-led forum looking at issues such as race, has been launched and is already going from strength to strength, with involvement from current boys, alumni and senior staff.

Set up in collaboration with the School in the wake of the Black Lives Matter protests, Perspective aims both to provide opportunities for discussion and to give boys useful resources so that they can easily learn more themselves.

In addition, information on various topics has now been added to eQE, the School’s online platform, on a dedicated Perspective page that was created by Thomas and Ayodimeji, with input from QE’s team of Equality, Diversity & Inclusion Ambassadors.

Mr Enright thanked Kelvin and Elliot for contributing to the one-and-a-quarter hour online discussion – “so informative for me personally”.

The Headmaster added: “I take the responsibility really seriously – this is the tip of the iceberg of the conversations that we need to continue to have and I am fully committed, as are my colleagues, to continuing and sustaining these discussions and to enabling them to take place in all parts of the School – it’s a huge undertaking.”

The Perspective eQE page now provides a basic introduction and links to further resources on the:

Mr Feven said: “Perspective is an exciting development in promoting the ‘student voice’ at the School and in educating the boys on social issues. With forthcoming updates due to focus on gender equality, climate change, the Hong Kong protests, and the Xinjiang re-education camps (and there is an ambition for further issues to be covered in time), I am hopeful that Perspective will continue to provide a platform for further activity and continuing discussion in the next academic year.”

The Zoom discussion featured a number of topics, including the racism faced by participants during their lives.

Kelvin and Elliot, who have both been very supportive of the School as alumni over a number of years, offered to take part, bringing their own understanding to current pupils as those from the generation above. 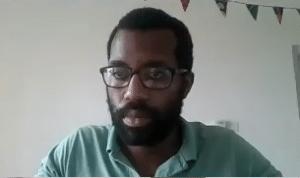 Kelvin (OE 1999–2006) recalled one incident when, as an 11-year-old, he went to a football camp in Totteridge Lane. Another participant made a racist comment to him, but he did not understand it, so asked his mother about it when he got back.

His mum, normally very mild-mannered, was extremely angry and upset at what had been said. A tense discussion later took place among the adults at the camp, which culminated in the other child – who had himself not understood what he was saying, since it was something he had picked up at home – leaving.

“It was really interesting to start to realise that the point of difference and point of tension was the colour of your skin, and I think it was a real moment where something changed for me,” said Kelvin. “My mum had moved across to the UK in the 1980s. My mum was mixed-race and my grandma, my white grandma, had lived in Ghana during independence and also faced racism, the other way around.”

After a career working in various roles, including consultancy to social mission-driven organisations, Kelvin is now the Chief Executive Officer of Clean Team Ghana, an organisation working to provide affordable sanitation options for residents in the city of Kumasi.

During the Zoom discussion, he also related another incident from when he was in the Sixth Form at QE. He had gone out during the lunchbreak to meet his girlfriend. Dressed in his suit, he was sat waiting in his car and had been doing some A-level History revision when a policeman approached. “He immediately accused me of being a drug-dealer…All he saw was a young, black guy out to cause trouble: who I was didn’t matter; what I had achieved didn’t – all he saw was the colour of my skin and immediately put me in a box.” 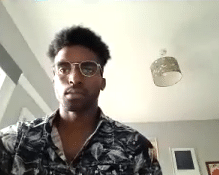 Kelvin’s brother, Elliot (2002–2009), a property specialist in London, thanked Thomas and Ayodimeji for chairing the discussion and praised QE for supporting Perspective: “Not every single school and teacher would be willing to use their time to facilitate this sort of thing.”

QE was, he added, well-placed to “start to accelerate the change and, hopefully, become a catalyst for other schools to do the same”.