Celebrating the past, looking to the future: Old Elizabethans Association Dinner 2019 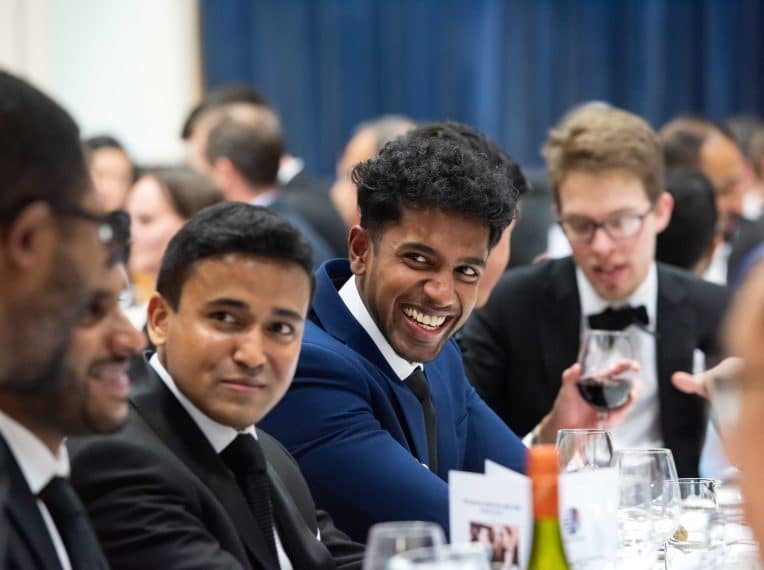 Former pupils from across the generations turned out in force for the annual Old Elizabethans Association Dinner, enjoying the opportunity to celebrate with fellow alumni, rekindling past friendships and forging new ones.

During an evening marked by much convivial chatter and by lively speeches, the diners also observed a silence in memory of former Headmaster Eamonn Harris, one of the great figures in the School’s recent history, who passed away only a few days before the dinner. 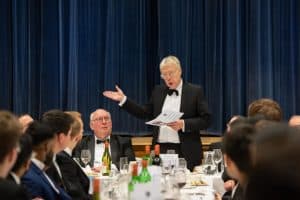 The celebratory tone was amplified by a good attendance from the ‘ten-year leavers’ – the class of 2009–2010 – while older Elizabethans present included Brian Gilbert, returning to the School after a gap of 50 years.

The event in the Main Hall was the first dinner to be hosted by the new President of the Old Elizabethans Association, Eric Houston, who taught at the School from 1976 until he retired, as Second Master, in 2010. Mr Houston is both a Governor and a Foundation Trustee of the School.

Another change this year was the reading at the dinner of the Queen Elizabeth’s School Prayer before grace was said. (The prayer is appended below.) 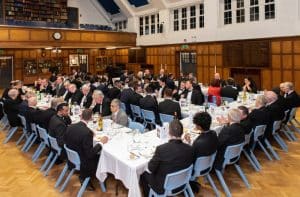 In his speech, Headmaster Neil Enright paid fulsome tribute to Mr Harris (HM 1984–1999): “Few can have had such a profound, transformational and lasting impact on Queen Elizabeth’s as Eamonn Harris, without whom we, quite simply, may well not be sitting here this evening.

“His bold decision-making, in making the School independent of the local education authority and then restoring academic selection, and the high expectations he had for all in the School community are the bedrocks of our present pre-eminence. We all owe him a debt of great respect and gratitude.” 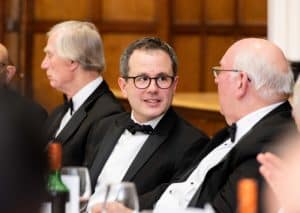 Mr Enright reported on significant developments during the year, including “the exciting news that we have secured £2.2m of government funding…for our new Music School”.

To prepare the site, the Mayes Building was demolished during the summer. This facility was named in honour of Harry ‘Curly’ Mayes who “spent a full 60 years (from 1902 to 1962) as butler, porter, steward and then caretaker”.

Alluding both to Mr Harris and to Mr Mayes, the Headmaster said: “The present fortunes of the School have been built upon the foundations of the great service given by so many.” 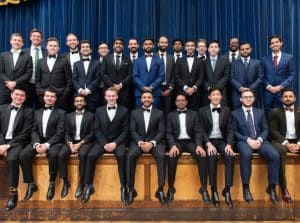 Mr Enright gave a warm, if piquant, welcome to the many ten-year leavers at table, pointing out that Assistant Head David Ryan had described this particular group “as his most challenging in all his years in the Sixth Form”!

“I’m not, though, surprised to see a good turnout, as they have actually proved to be one of the more actively engaged alumni cohorts and are doing lots of good work in support of the School,” he added.

“They were, and remain (on this evening’s evidence), a very sociable and enthusiastic group and it is always a great pleasure to have them here at School events.” 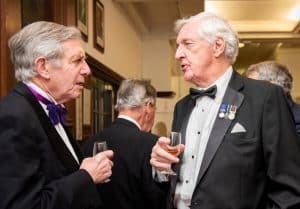 He reported on the start of a project to digitise QE’s archives, beginning with photographs.

And, he said, with the School’s 450th anniversary in 2023 approaching, his predecessor as Headmaster, Dr John Marincowitz (1999–2011), was well on the way to completing his book on the School’s history.

“Recording and giving access to the School’s history is important so that the contributions of people such as Eamonn and Curly Mayes are remembered and so that generations of Elizabethans to come are able to learn about their place in the long and fascinating narrative.” 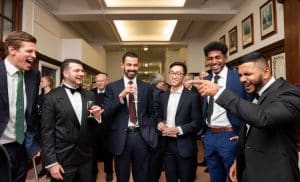 Mr Enright concluded his speech with a report on QE Connect, the School’s recently launched online community for alumni, which has gained more than 450 members in the space of just a few weeks.

“Whilst we want to help OEs connect to the past, we also have QE Connect to help enable connections in the present and the future,” he said.

O Lord God, the Maker and Builder of every house not made with hands, we give thee thanks for this School in which we have our share.

Give thy blessing, we beseech thee, to all this our body, to the Head Master, to the members of the staff, to the boys, and to those who minister our needs.

Inspire us, O Lord, so to do our work today that, even as we are being helped by the remembrance of the loyal lives of those who came before us, so our faithfulness in thy service may aid those who shall take our places.

Remember, O Lord, for good, all who have gone forth from this School, to labour elsewhere in thy kingdom.

Grant that both they, and we, may fulfil thy purpose for us in this life, and finally may attain thine everlasting kingdom, through Jesus Christ our Lord.