From worrier to warrior: fashion entrepreneur speaks to sixth-formers on his mental health battle 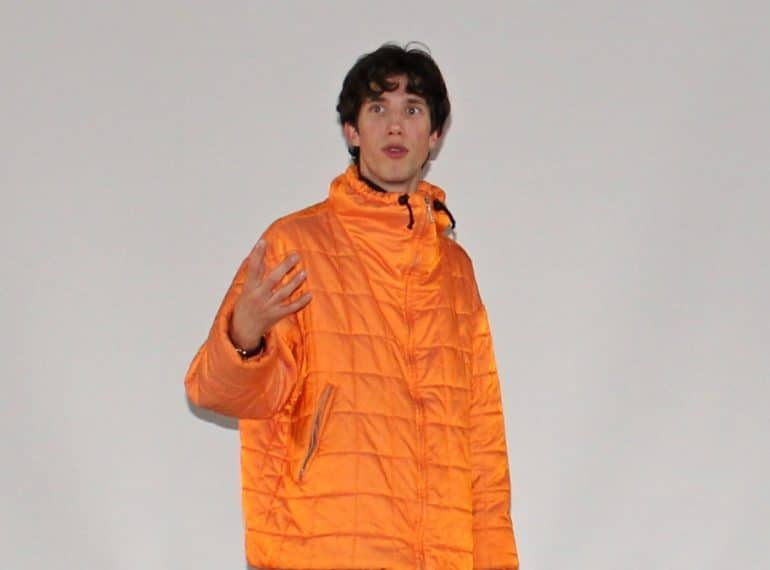 A campaigner addressed sixth-formers about his own mental health journey and told how it inspired him to start a socially conscious fashion business.

“I’m using fashion as a vehicle to raise awareness of mental health,” he told the Year 12 and 13 boys, adding that his was “a positive message, but a sensitive one”.

In the talk, he recounted the many ups and downs he experienced over a three-year period. “I kept asking myself when I would be better. The biggest word is time.” 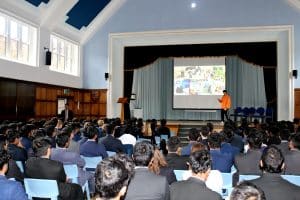 He started his talk with a breathing exercise, talking to the boys about mindfulness, paying attention to one’s breath and letting one’s thoughts pass. He asked them to join in by trying the exercise themselves for a few minutes.

George, who comes from near Winchester in Hampshire, explained that he had been hyperactive from a young age. His mental health problems began when, at a festival in 2012, he experimented with drugs – ecstasy and MDMA – aged 16. He did not enjoy the experience and started to feel paranoid afterwards, so quickly decided it wasn’t for him.

A week later whilst clearing out the horses at his parents’ house, he had his first attack: he felt hot, could not breathe and started to panic. These attacks continued every day for a week. He was diagnosed with panic disorder and anxiety, and was referred to CAMHS (Child and Adolescent Mental Health Services) for counselling.

He saw a reassuring therapist who listened to his story. He was told there was a 40-week waiting list to start treatment and was lucky enough to be treated privately as his parents were able to support him. This treatment included hypnotherapy to put him through the sensations of panic in a safe environment. George was prescribed beta blockers and SSRIs (a class of drugs typically used as anti-depressants).

When he was feeling better, George and his friends travelled to Thorpe Park, where they all decided to go on the Stealth roller-coaster. He realised that the medication he was on had made him numb – he felt nothing, no adrenaline or excitement from any of the rides.

George’s story continued with a referral for cognitive behavioural therapy to learn coping mechanisms. He learnt to challenge his anxiety by breaking down thoughts and trying to rationalise them.

Not long after this, George was at his grandmother’s house where he kept imagining there was cocaine on the table. One-and-a-half years into treatment, he opened up to family and found that talking helped.

In all, it took him three years to get better. During his recovery, he used diaries and drawings to express himself. While unable to go to college or work, George went to his father’s office and started experimenting with designs.

Eventually, he decided to start his own t-shirt business, with the help of a friend. In 2017 he launched his Warrior collection, which includes clothing with words such as ‘don’t feed the fears’, ‘sometimes I’m okay, sometimes I’m not’ and ‘warrior, not worrier’.

His aim, he explained, was not to label people with ‘I have anxiety’, but to encourage them to open up about their stories if asked about the t-shirts, thereby starting a conversation about mental health.

His collection made it to London Fashion Week, with celebrities and TV reality-show stars wearing it.

He started selling his story to newspapers and magazines to raise awareness, and the brand’s success grew very rapidly as it featured in publications including Vanity Fair, The Observer and the Evening Standard’s Style magazine, and was a winner in the British Fashion Startup Awards.

Twenty-five per cent of the proceeds of certain of his designs go to YoungMinds, the UK’s leading charity committed to improving the emotional wellbeing and mental health of children and young people.

After his success with Maison de Choup, George went back to a festival – “the biggest place for drugs” – and found that he had no problem in being there. Indeed, he is now able to speak to a roomful of people, he pointed out to the boys.

Among his messages to the audience were: “It’s ok not to be ok” and “If you’re suffering or a friend is suffering, you are not alone.”

Headmaster Neil Enright said: “George spoke very frankly about his personal experience and in doing so exemplified the way in which talking about mental health can prove an important step in helping deal with the issues that you may be encountering. Through such assemblies we want to raise awareness among our boys of the sorts of challenges that people can go through with their mental health and to underline that there is an understanding and supportive community around them should they find themselves in a similar situation, now or in the future.”

* ‘Choup’ was George’s childhood nickname for his sister, Charlotte, who supported him throughout his mental health problems.