New country, new career: Hadleigh combines a life in IT with his long-standing devotion to service

Alumni > News & Events > News > New country, new career: Hadleigh combines a life in IT with his long-standing devotion to service 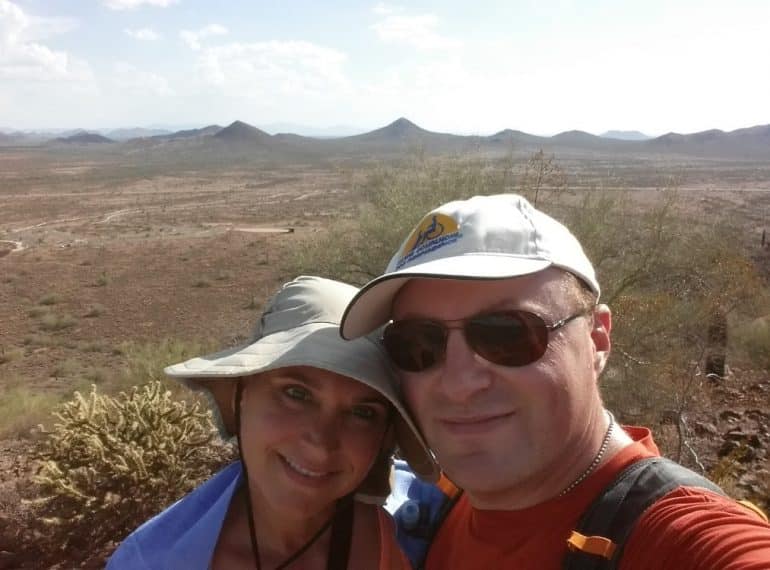 Hadleigh Rush’s career has taken him from local charity fund-raising to a key role with software giant VMware, from working in Watford to a new life in the deserts of Arizona.

Yet throughout his professional life, there is one common thread: “I have found a passion for giving back and serving.” 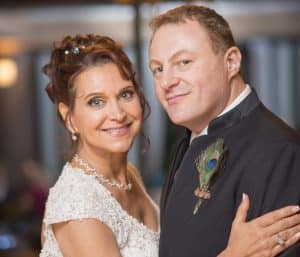 Today, he and his wife, Christa, work for several charitable organisations and he is heavily committed to Make-a-Wish, a non-profit organisation founded in the United States that fulfils life-changing wishes for children with a critical illness.

Had (OE 1985–1990), who recently paid a visit to QE, says memories of his School days remain clear. Coupled with the appointment of Eamonn Harris as Headmaster in 1984, it was the arrival mid-term of a class from another county whose school was closing that played a key role in saving QE, which was itself slated for closure at the time. “That was my class!” says Had.

“I was a trumpet player with Mr Ellis’s band for most of the time I was at QE. We toured a fair amount to other schools, competitions, the opening of ToysRUs Brent Cross, and we even played on the stage at the Royal Albert Hall – I think we played twice that day.”

His parents were, he says devoted to QE, organising the first coach system (“…as the horrors of the 107 route from QE to Stanmore still haunt me today!”) They also donated Music stand covers for both the band and orchestra. “I was really thrilled to see Music is such a huge part of QE now: our Music room back in the late 80s was just the small area to the left of the main stage by the only computer lab we had at the time.” 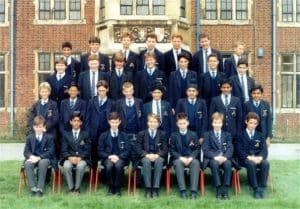 Had was in the cast for the drama production, The Hitchhiker’s Guide To The Galaxy, along with several of the classmates pictured in his class photo. A member of Pearce House, he recalls spending a great deal of time enjoying Drama and Music, as well as in the computer lab and in the library. “I attempted Latin. I received detention a few times in my day and was called into our Headmaster’s [Eamonn Harris] office once, but generally was a well-behaved pupil.”

On leaving, he studied at the University of Hertfordshire. After that, he embarked on his first career, working for a Watford-based charity with a mission to raise £1m, and then £1m every year, to turn a derelict hospital built in 1925 into what is now the Peace Hospice.

“I spent about six years working for the Hospice, managing a group of about 40 awesome volunteers who never seemed to tire as we raised money through charity shops and holding, or helping to organise, hundreds of public fundraising events. The hospice opened a temporary day care centre in mobile offices, until HRH Princess Michael of Kent opened the main facility in 1996.

“I also was an active member of the Radlett Round Table. During this period, I made so many friendships and relationships with volunteers, local mayors, doctors, celebrities, press, MPs, members of the clergy, JPs and an OBE, some of whom I still communicate with today.

“In 1999, I found myself uprooting my small village way of life and moving to the dry heat of the Sonoran Desert in Arizona.” Unable at the time to afford the cost of transferring his UK qualifications to the US, he went to college there, while also starting a job as a critical accounts specialist for a small, family-run credit counseling agency.”

“This agency grew ten times larger by 2002. Within a year, I found myself passing five IT industry certifications and being hired in the IT department. The following year, I took an active role in designing the IT infrastructure in their new 40,000sq ft state-of-the-art call centre here in North Phoenix. This was my first exposure to some newfangled technology called ‘virtualisation’. I was hooked on VMware.”

[In computing, virtualisation refers to the creation of a virtual (rather than actual) version of something, including virtual computer hardware platforms, storage devices, and computer network resources. VMware is a global company providing cloud computing and virtualisation software and services.]

“After spending ten years at this agency and working my way up the IT ladder, I had completed another degree and a series of updated IT certifications specialising in virtualisation and security.”

Although he had no thought of leaving the company, since he enjoyed the friendly work atmosphere, he applied to, and was interviewed for, all kinds of jobs in order to gain experience in application-writing and interviewing tactics (“Something I recommend if you have the time.”)

“I was contacted by an HR firm in New York who were looking for a Support person for a Phoenix-based company. On the phone, I found out the company, 10ZiG Technology, was across the street from the agency I was working at, so I took the interview with the CEO. The interview lasted an hour: we talked little about the company or position; we talked about life, England and moving to America. The owner of the company was originally from Leicester; the company had offices in the UK, Israel, Sydney and Italy, and was now headquartered in Phoenix. That evening the CEO sent me a rather nice job offer through email. I took two days to think about the offer and graciously wrote back and declined. The next day I received a substantially increased offer to take on the role of Support & Technical Manager of 10ZiG Technology – which I jumped at.

“I spent five years with this company, continuing my passion for virtualisation. I had the pleasure of travelling the US – and a few times back to England – for meetings, dealer presentations/conferences. During this time, I specialised in many different virtualisation solutions, but mainly focused my talents on those from VMware.

He had no intention of leaving “the 10ZiG family”, where the perks included paid visits back home to the UK, until he was contacted by a recruitment officer for the one company that he had dreamed of working for, VMware itself. “The gruelling interview process lasted four months of phone and of one-to-one and panel interviews, which included on-the-spot whiteboarding demonstrations.”

In December 2015, he was offered a position with VMware within its prestigious Technical Account Organization. Today he is a Senior VMware Technical Account Manager, engaged with a small set of VMware US’s large Enterprise customers. “I am my customers’ single point of contact for all their VMware-related questions, and I provide them with enablement, recommendations, coordinate projects, issue-management and problem-solving resolutions from my experience and skill sets. I am constantly building my knowledge and expertise on the latest and future technological solutions that transform traditional IT shops to the next generation of hybrid of on-premises and cloud-based datacentres.”

Three-and-a-half years ago, Had married Christa. They recently moved to an area outside the Phoenix metropolitan area “nestled in the mountains, away from the city life”. Had relishes this environment: “There is a beauty to the Arizona landscape, with the natural hardscaped desert, rock and abundant plant life and animals that survive here. We both enjoy hiking around the mountains in our area, but also enjoy taking a break from the heat by going just 100 miles up the road to the forests.”

That heat can be considerable: on the day he wrote to Alumni News, it hit 111F (44C). “It is something to get used to. Also something to get used to is that Arizona is still considered the wild, wild west, founded just 107 years ago. We have active cattle ranches, bull-riding, gold and silver mines, real cowboys and [the historic town of] Tombstone; gold-panning is still a thing here. 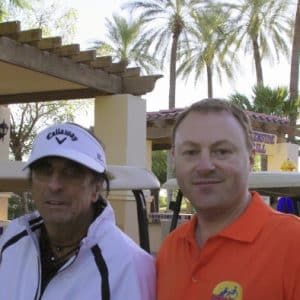 “In my spare time here in Arizona, my wife and I continue our shared passion for giving back and serving. We have spent 10 years volunteering with multiple charitable organisations, such as Canine Companions for Independence (CCI), who breed and train highly skilled service dogs, providing them free of charge. We get to spend time with our puppies in training and also to spend a day golfing with celebrity pro-golfers and even Alice Cooper (pictured with Had).

“Another big volunteering passion of ours is Make-A-Wish, founded in Arizona. My wife and I are on track to grant a total of over 70 wishes for our ‘Wish-Kids’ this year as volunteer ‘Wish-Granters’.”

There is even cross-over between his charity work and his professional career, thanks to VMware’s own ethos of service and its partnership with Make-A-Wish. “Since the beginning of 2019, I have been volunteering my VMware expertise with Make-A-Wish HQ here in Arizona under the guidance of Make-A-Wish’s CIO and Senior IT Director by providing pro bono VMware Team Account Management services. So now I get really get to combine my career and my passion for giving back.”

In addition, VMware takes an active interest in all his charity work, encouraging him to log his hours not only with Make-A-Wish, but also with CCI and church ministries with which he is involved. “Once I reach 40 hours a year (which doesn’t take me long), VMware awards me with $1000 to a send to a charity. This year I have selected The Friends of Queen Elizabeth’s to receive the grant.”

On his recent trip back to QE, he enjoyed the opportunity to spend time with the Headmaster, Neil Enright, and to take a tour. “I thoroughly recommend to any OE to reach out and book time for a visit if you have not been back in the last 10-plus years. I think you will be amazed at the recent history and achievements of Neil, his team and the pupils.”