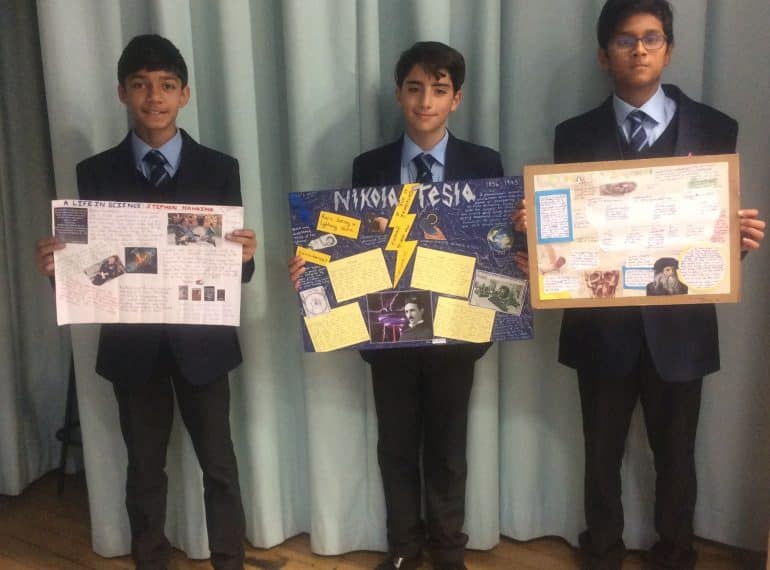 From Leonardo da Vinci to Stephen Hawking, this year’s entries to QE’s Science House competition covered a full gamut of top scientists across the ages. 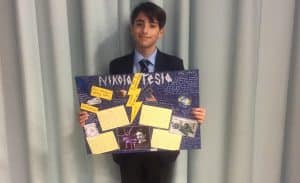 Participants were required to research eminent and unusual scientists and produce a poster. First prize went to Year 7’s Hadi Al-Esia, from Stapylton House, who chose the brilliant, but slightly lesser-known, Nikola Tesla.

“This year we had 25 excellent entries,” said Biology teacher Melanie Haj Hussein. “The competition was open to boys in Years 7 and 8, and the standard was very high. We were very impressed with the effort they had put in. Not only had they chosen interesting scientists, but they had presented the information in creative and engaging ways.”

Hadi’s choice, the Austrian-American scientist and inventor Nikola Tesla, was born in what is modern-day Croatia in 1856, but emigrated to America in his early twenties to work at the Edison Machine Works in New York. He worked there for a brief period before striking out on his own and developing the Alternating Current (AC) induction motor and related AC patents.

Hadi’s fact-packed poster featured ‘electric’-style silver writing against a dark-blue background and also used visual effects related to the electricity theme, including a lightning flash and an image of the globe incorporated into a light bulb.

His poster and those of the runners-up, Omar Hashmi, Chanakya Seetharam, Theo Moses and Advik Balaji, all from Year 7, are being displayed in the Science Department.