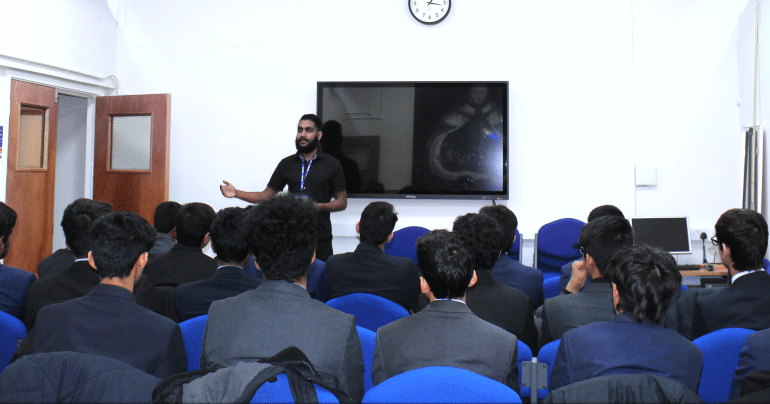 The first Elizabethan ever to go to California’s Stanford University sang the praises of studying stateside when he returned to speak to senior pupils at QE.

Stanford comes at or near the top of most global university rankings, with Times Higher Education naming it as one of its six world ‘super-brands’, together with Cambridge, Oxford, Berkeley, Harvard and MIT. 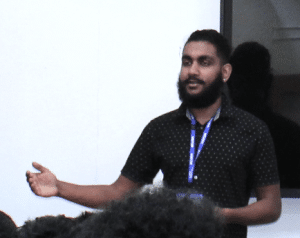 Valavan Ananthakumaraswamy OE (2009-2016), who chose to follow a mixed Liberal Arts programme for the first two years of his degree, told the current QE pupils that he had been particularly attracted by the wide range of subjects available through the US university system and by the closer relationships with professors.

He appreciated the excellent facilities and also the flexibility available to students when choosing classes, giving them more control over their own workload.

Valavan applied to Stanford after winning a place on the Sutton Trust’s US Programme – a scheme delivered by the educational charity in partnership with the US-UK Fulbright Commission to give bright British state school pupils a taste of life in American higher education. His profile for the programme recorded that his family originally come from Sri Lanka, but were displaced by the civil war.

The report also stated that Valavan saw his community service as “the most important part of him”. In 2014, Valavan helped found The Youth Project, a global movement of young people striving to make the world a better place, which now operates in 14 countries.

Extensive extra-curricular opportunities are a feature of the American system, he told the QE puipls on his recent visit, recalling his involvement with charity work while at QE and saying that this is something he has been keen to continue with at Stanford.

Palo Alto’s 300 days of sunshine each year were undoubtedly another attraction, as was the campus culture and the sense of community that this fosters. Valavan said he has been enjoying ‘dorm life’, adding that in his first year, he went on a skiing trip that was actually funded by the dormitory.

Valavan offered guidance on the application process, covering the nature of the aptitude tests, including SATs and ACTs (the two different tests that applicants are required to take for admittance to a US university). His main piece of advice was that applicants should just keep practising!

He advised boys to look into the possibility of financial aid for study in the US, covering the difference between ‘need-blind’ and ‘need-aware’ – terms used in the US, with the former meaning a university admission policy under which an applicant’s financial situation is not considered when deciding admission. A big advantage for those able to secure such financial aid was that, unlike in the UK, there was then no need for a student loan, Valavan said.

When asked about challenges he had faced, Valavan spoke about how he had to adapt to the culture of America. TV shows, shops and sports are all different there. He mentioned that President Trump was elected in first the two months of his studying there. He added that he likes the challenge of adapting and finds it exciting.