QE’s New Year’s honours: top team take over at the start of 2019 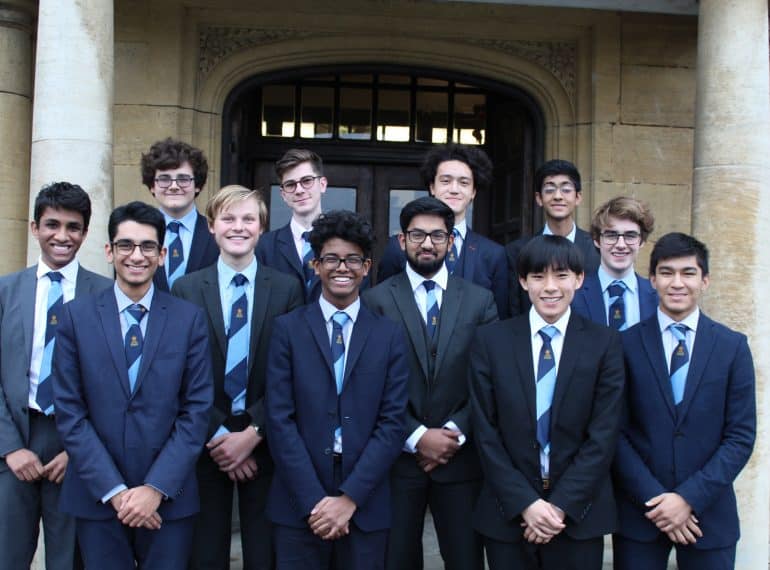 New School Captain Bhiramah Rammanohar and his team take up their positions today at the start of the new term.

Together with his Senior Vice-Captains Fozy Ahmed and Oscar Smith, he heads a 120-strong group of School officials for 2019, who are all drawn from Year 12.

Headmaster Neil Enright said: “I congratulate all the prefects upon their well-deserved appointments. They come from a much-liked and well-respected year-group within the School.” 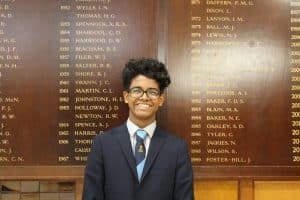 “Bhiramah is a worthy recipient of this honour, as is made clear by a recent School report which described him in these words: ‘One of the most affable, decent young men that one could care to meet or teach; he marries his many innate talents with a determined industry, the combination of which allows him to be successful in all facets of his School life.’”

Bhiramah entered Year 12 in September fresh from celebrating a run of ten grade 9s in his GCSEs – the highest possible grade under the new marking system. His current Head of Year, Lottie Coleman, points to his “compassion, enthusiasm and commitment to all that he does”.

The team of officials includes ten Vice-Captains, six House Captains, six Deputy House Captains and 92 Prefects. One innovation this year is the appointment of three Equality, Diversity & Inclusion Ambassadors – Leo Kucera, Vithusan Kuganathan and Josh Osman: their new positions reflect the increasing focus upon these areas across School life. They have been introduced following discussions conducted with boys through QE’s pupil panel.

“We are committed to nurturing leadership skills among our pupils,” Mr Enright added. “There are opportunities to develop these, beginning from boys’ first arrival in Year 7 and with the prefect system being very much the pinnacle. For those boys who secure a place in this illustrious cohort, there are certainly significant duties and responsibilities, but their positions also serve as a reward for the commitment and broad contributions they have made to the School in their time with us.”

Senior Vice-Captain Fozy Ahmed is a First XV rugby player. Assistant Head David Ryan wrote about him in his Year 11 report that he “sets an excellent example to other students, always acting in a relaxed, but thoughtful manner; he is mature beyond his years but also kind and considerate towards those around him.”

Like the School Captain, Senior Vice-Captain Oscar Smith, performed outstandingly at GCSE, achieving a clean sweep of grade 9s. A particularly keen and able linguist, he is described by Head of Languages Christopher Kidd as “impressive in every way…diligent, industrious and [with] the desire to perform at the very top level. He is mature, acting and working as a young adult, and attaining the results that his hard industry deserves.”

Mr Enright thanked 2018 School Captain Aashish Khimasia and his outgoing team for their efforts and commitment over the course of the year.