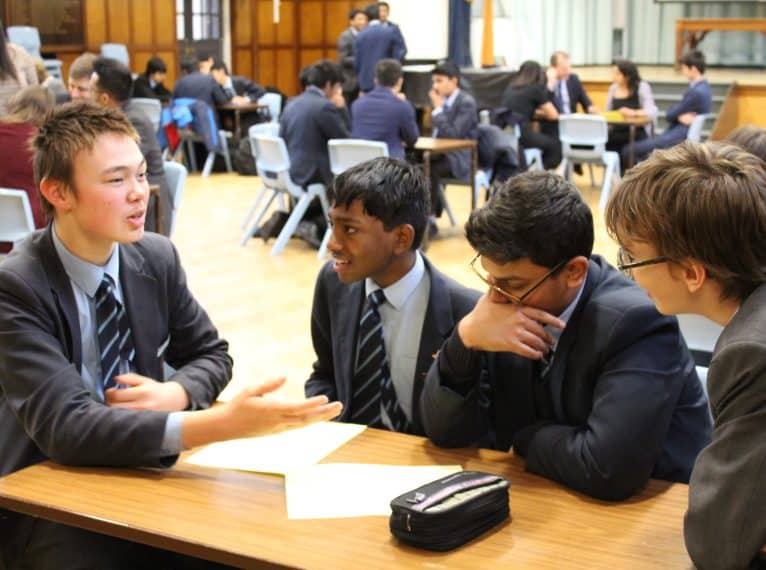 Underne emerged as victors in the close-fought inter-House World Book Day quiz, defeating the boys from Stapylton on a tie-break question.

And the competition was equally ferocious among the staff teams, with some (not entirely serious) dark mutterings being heard from teachers when their own result was announced!

Simi Bloom, of Year 7, Hamza Mohamed, of Year 8, along with Year 9’s Aryan Patel and Year 10’s Amin Mohamed, formed the winning team, with Hamza first off the mark for the all-important tie-break question: Who was the poet Laureate before Simon Armitage? (Answer: Carol Ann Duffy).

The questions covered a gamut of authors from Charles Dickens to Ruta Sepetys, and from Chaucer to J K Rowling, with a special Shakespeare round included for good measure.

The House teams were joined by five staff teams and one Sixth Form team in the event held in the Main School Hall, which was organised by English teacher Panayiota Menelaou.

QE’s Head of Library Services, Surya Bowyer, paid tribute to her work and reflected on the event as a whole: “What struck me was how universal the event was. There were boys from Years 7 through to 11 in the House teams, along with teams comprising sixth-formers, teachers and non-teaching staff. It was brilliant to see how literature can be such an effective unifier. The universality of the event was reflected also in Ms Menelaou’s careful curation of the questions, which produced a real mix of niche versus populist, and ensured that every participant knew at least one answer.”

When the winning staff team of Dr Corinna Illingworth, Mr Robert Hyland, Ms Audrey Poppy and Mr Jonathan Brooke was announced, there were rumblings from other competitors. Helen MacGregor, Head of History, said: “The History department was robbed of victory! We are already in training for next year…” while Mr Bowyer added: “With Mr Hyland’s team claiming victory, there is some chatter among the staff body that perhaps the contest was fixed….” Ms Menelaou countered she had distributed the English department staff and two librarians as evenly and fairly as possible among the staff teams!

Below is a selection of the questions and answers: